MANILA, Sep 29 2009 (IPS) - Sitting in an apartment in central Manila, 70-year-old Lydia (her second name has been withheld to protect her identity) speaks in hushed tones. A manghihilot, or traditional midwife, she is wary when talking about her experiences of abortion, an often-taboo subject in the Philippines. 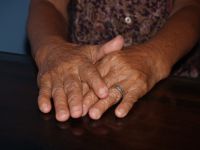 While Lydia, speaking through a translator, insists that for more than 50 years she has merely been "a local midwife who helps women give birth", she also reveals several instances in which she assisted in the termination of pregnancies.

In the most recent of these, a woman seeking abortion arrived at Lydia’s doorstep in August. Initially turned away, the woman returned three days later, this time bleeding from her vagina.

According to Lydia, the woman told her that she had received an injection and taken cytotec in order to abort her pregnancy. Cytotec is the trade name of misoprostol, a drug whose uses include the treatment of gastric ulcers but which is commonly used for self-administered abortions in the Philippines.

Lydia, who did not allow IPS to go to her house for fear that such a visit could lead to unwanted attention, says that she felt pity for the woman and performed a massage until the foetus was expelled.

In the Philippines, where an estimated 80 percent of the country’s almost 100 million people are Catholic, abortion remains illegal. Women who undertake to abort pregnancies face up to six years in jail, as does anyone who assists in the abortion.

"They’re done by personnel who are not trained at all, so they’re not able to do the abortions properly," Dr Melgar explains.

According to a report released earlier this year by the Guttmacher Institute, a reproductive health research organisation based in the United States, there were 560,000 aborted pregnancies in the Philippines in 2008.

The institute’s 'Meeting Women's Contraceptive Needs in the Philippines' report estimated that around 1,000 women died as a result of abortion last year, with up to a further 90,000 hospitalised due to complications.

Dr Melgar says that although women who seek help at hospitals are desperate, they are often treated harshly by medical practitioners "because of the legal and moral prohibitions."

Besides neglect and verbal abuse from doctors, many women "are treated without anaesthetic, so they really are made to feel the pain," she says. "

"We have talked to doctors and they say that their motive is really to make the patients learn a lesson. They say that their objectives are benign, that all they want to do is to stop women having abortions," Dr Melgar tells IPS.

The Guttmacher Institute judged that last year, a massive 1.9 million pregnancies, or 54 percent of the total, were unintended.

Dr Melgar argues that unwanted pregnancies – which can lead to abortions – stem from several factors including gender relations within a marriage. She says that, particularly among poor families where women often do not have a high level of education, the decisions of the husband usually prevail.

According to Dr Melgar, poverty also creates problems in terms of planning for pregnancies. She says that contraceptive pills, the cheapest of the modern methods of contraception, cost around 50 pesos (1.05 U.S. dollars) per packet, which is "equivalent to a kilo or two of rice."

The major factor, she believes, is "women’s lack of access to [modern] family planning methods."

The highly-influential Catholic Church and the administration of President Gloria Macapagal-Arroyo back "natural" family planning methods such as abstinence during fertility periods and the lactational amenorrhea method based on a woman’s postpartum infertility.

The Guttmacher Institute says these natural or traditional methods accounted for 24 percent of last year's unintended pregnancies, while modern contraceptives like the pill and condoms were ineffective in 8 percent.

Dr Melgar says that the Church spreads "a lot of misinformation" about modern methods which "makes for a very hostile environment for women to choose their methods properly."

Added to this is the de facto ban on modern contraception in areas of Manila stemming from Executive Order 003, introduced by former Mayor Jose Atienza in 2000, which aims to discourage "artificial methods of contraception".

While the decree remains in place for now, it is likely to be struck down if the controversial reproductive health bill currently before Congress is enacted into law. The R.H. bill, as it is known, would require the equal promotion of both modern and natural family planning methods.

But for Lydia, the traditional midwife, such controversy is irrelevant when compared with her day-to-day dealings.

She says that many women from across the spectrum of Philippine society, including rich and poor, married and single, come to her seeking abortions. She says that while she refers these women to others who will perform abortions, she provides care for those taking cytotec, which is easily available on the black market.

Lydia, a staunch Catholic, says she is offered money by those wanting to abort their pregnancies. But while the money could make her life more comfortable, Lydia says she calls for assistance to reject such enticements.

"I just ask God to help me not to yield to that temptation. My children can support me, so I just ask God," she says.