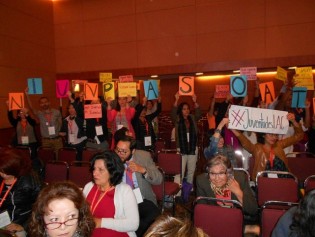 By Raúl Pierri
Representatives of 38 countries of Latin America and the Caribbean meeting this week in the Uruguayan capital urged governments in the region to consider modifying their laws on abortion, which are among the most restrictive in the world.

By Raúl Pierri
Latin America and the Caribbean cannot hope to have truly advanced, progressive policies in sexual and reproductive health as long as women do not have the right to decide to interrupt their pregnancy, says Mariela Castro.

By Fabiana Frayssinet
Nearly 20 years after the landmark U.N. conference on population and development, the countries of Latin America have an opportunity to make headway with a new agenda on these issues, thanks to the favourable economic context that has made it possible to reduce social inequalities.
ADVERTISEMENT ADVERTISEMENT