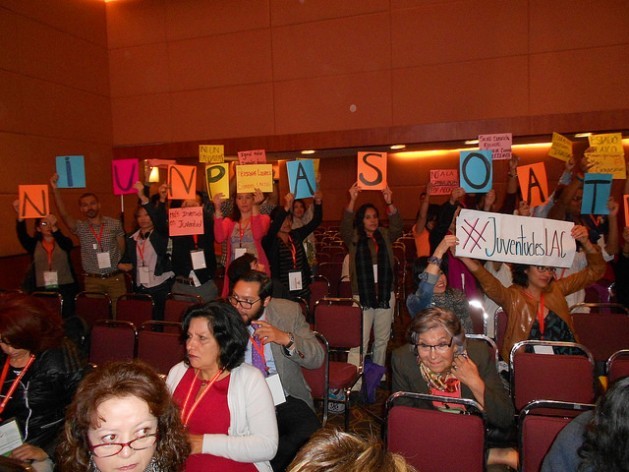 “Not one step back” in compliance with the region’s demographic agenda, demanded activists at the Second Session of the Regional Conference on Population and Development in Latin America and the Caribbean, held Oct. 6-9 in Mexico City. Credit: Emilio Godoy/IPS

MEXICO CITY, Oct 10 2015 (IPS) - “The countries of Latin America have not fully committed themselves to the international conventions and have not given indigenous peoples access. Nor have their contents been widely disseminated,” to help people demand compliance and enforcement, said Guatemalan activist Ángela Suc.

The indigenous community organiser’s criticism is an alert regarding the pledges made at the Second Session of the Regional Conference on Population and Development in Latin America and the Caribbean, organised Oct. 6-9 in Mexico City by the Economic Commission for Latin America and the Caribbean (ECLAC) and the United Nations population fund (UNFPA).

“We need land, territory, and access to culturally sensitive healthcare and education in line with our traditions and knowledge and in our languages,” Suc told IPS.

Suc, a representative of the Pocomchí people in the Guatemalan delegation to the conference, said the native population also experiences demographic phenomena such as migration and ageing, just like the non-indigenous population in the region.

The vicissitudes of native and black populations were part of the focus of the debates at the conference, which followed the one held in Montevideo in August 2013. A civil society gathering was also organised parallel to the official conference.

Participants discussed the problems still affecting these groups, such as poverty, discrimination, lack of opportunities, and high maternal and infant mortality rates.

More than 45 million indigenous people live in this region of around 600 million. They belong to over 800 native groups, according to the ECLAC report “Indigenous peoples in Latin America: progress in the last decade and pending challenges for guaranteeing their rights.”

Brazil heads the list, with 305 different native groups, followed by Colombia (102), Peru (85) and Mexico (78). At the other extreme are Costa Rica and Panama (nine), El Salvador (three) and Uruguay (two).

The countries with the largest numbers of indigenous people are: Mexico (nearly 17 million), followed by Peru (7.2 million), Bolivia (6.2 million), and Guatemala (5.9 million).

ECLAC reports the fragile demographics of many native peoples, who are at risk of actually disappearing, physically or culturally, as observed in Bolivia, Brazil, Colombia and Peru.

The problems they face include forced displacement from their land, scarcity of food, pollution of their water sources, soil degradation, malnutrition and high mortality rates.

Birth rates are dropping in the region, with an average of 2.4 children per indigenous women in Uruguay, 4.0 in Nicaragua and Venezuela, and 5.0 in Guatemala and Panama. 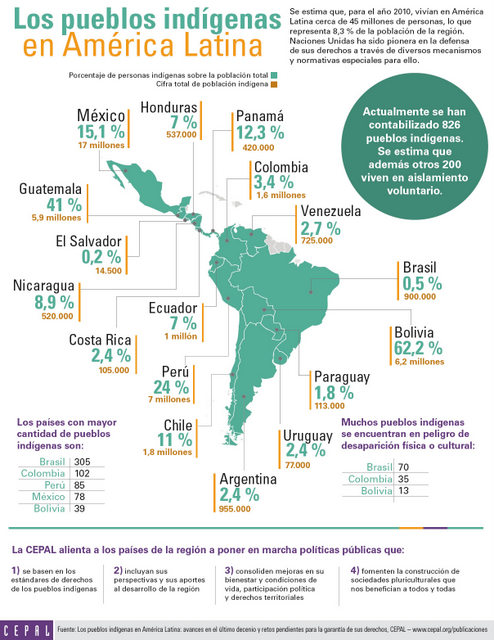 Map of indigenous peoples of Latin America and the Caribbean, drawn up by ECLAC, which estimates the number of native people at 45 million. Credit: ECLAC

Infant mortality rates among indigenous people are still higher than among the rest of the population. The biggest inequalities are found in Panama, Peru and Bolivia, in that order. And malnutrition is a major problem in Guatemala, Ecuador, Bolivia and Nicaragua.

The ECLAC report stresses that indigenous children grow up in material poverty and that violence against native children and women remains a major challenge.

Of the region’s 12.8 million indigenous children, 2.7 million are in Mexico, 2.4 million in Guatemala, and 2.2 million in Bolivia.

“Our demands have been set forth in different international platforms and are still valid,” Dorotea Wilson, general coordinator of the Network of Afro-Latin American, Afro-Caribbean and Diaspora Women (RMAAD), told IPS.

“We are going to monitor, observe and follow up to ensure that countries assume these commitments and comply with them,” said the Nicaraguan activist, who also took part in the regional conference. She added that compliance with the measures in favour of minorities requires political will, as well as agreements between the authorities and civil society, and specific budgets.

More than 120 million afro-descendants also live in the region, including 97 million in Brazil, one million in Ecuador and 800,000 in Nicaragua, according to national census data that included specific questions about ethnic identity. In other countries there are no specific statistics, such as Colombia, which has a significant black population.

The report “Afro-descendant Youth in Latin America: Diverse Realities and (un)Fulfilled Rights”, produced by ECLAC in 2011, showed that teen motherhood among young blacks was more widespread than among the rest of the population, especially in Colombia, Ecuador, Guatemala, Nicaragua and Panama.

One of the problems discussed at the conference is the lack of demographic statistics on the region’s afro-descendant population.

In the Montevideo Consensus on Population and Development, which contains the conclusions reached by the first edition of the conference, the region’s countries pledged to take into account the specific demographic dynamics of indigenous people in the design of public policies, and guarantee their right to health, including sexual and reproductive rights, and to their own traditional medicines and health practices.

They also agreed to adopt the necessary measures to guarantee that indigenous women, children, adolescents and young people enjoy full protection and guarantees against all forms of violence and discrimination.

With respect to blacks, they agreed to tackle gender, race, ethnic and generational inequalities, guarantee the enforcement of their right to health, in particular sexual and reproductive health, and promote human development in this population group, while ensuring policies and programmes for improving women’s living conditions.

The plenary of the second conference approved the “Operational guide for the implementation and follow-up of the Montevideo Consensus on Population and Development”, which includes 14 provisions for indigenous and afro-descendant peoples.

Approval of the guide was hindered by the Caribbean delegations’ protest that they had not been given the document ahead of time – an obstacle that was not resolved until the early hours of the morning of the last day of the conference.

“To the extent that full participation by indigenous peoples exists, the guide will be complied with. This is a challenge for the State,” Suc said.

The process can be an engine driving progress in the U.N. International Decade for People of African Descent 2015-2024.

“The guide can be improved. We can influence the follow-up. But it is a challenge,” Wilson said.

The Political Declaration of the Social Forum held parallel to the official conference, which brought together social organisations from throughout the region, stressed that every indicator in the guide should be broken down by age, sex, gender, race and ethnicity.

But it also complained that two years after the approval of the Montevideo Consensus, the “ambitious, innovative agenda has not yet translated into substantive progress, and in some cases there have even been setbacks” in areas such as gender violence, hate crimes, high maternal mortality rates, a rise in teenage pregnancies, and discrimination.