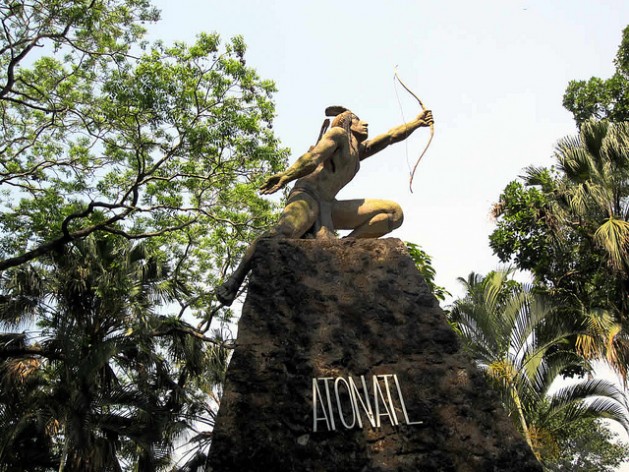 SAN SALVADOR, May 14 2012 (IPS) - After decades of struggle, indigenous people in El Salvador will finally be recognised in the constitution – a first step towards recovering their community identity, which they have been denied by the state and by society at large.

Article 63 of the constitution will be modified to acknowledge native languages and other expressions of indigenous culture that the state has not explicitly recognised up to now.

“This constitutional reform is important because at least the state is committing itself to working on specific policies to strengthen the world vision, values and spirituality of our native peoples,” activist Betty Pérez, with the Salvadoran National Indigenous Coordinating Council (CCNIS), which groups around 20 organisations, told IPS.

The lawmakers who took office on May 1 must ratify the amendment approved Apr. 25 by the outgoing legislature, as established by the laws governing constitutional reforms.

But because the line-up of political forces in the legislature remained unchanged after the March elections, there are no doubts that the reform will receive the votes of the necessary special majority of two-thirds of the 84 members of the single-chamber Legislative Assembly. Indigenous leaders expect the amendment to be approved in June or July.

Although the Nationalist Republican Alliance (ARENA) rejected the reform, the right-wing opposition party does not have enough legislators to block its passage by the left-wing governing Farabundo Marti National Liberation Front (FMLN) and its allies.

El Salvador is a signatory to the United Nations Declaration on the Rights of Indigenous Peoples, adopted by the U.N. General Assembly in September 2007. But the state has not shown any interest in ensuring compliance with the international instrument.

There are no socioeconomic policies that directly benefit these ethnic groups, according to the Sociolinguistic Atlas of Indigenous Peoples in Latin America, published by UNICEF, the U.N. children’s fund.

“The reform is a great stride forward, because this country has ignored the existence of the indigenous population, and as a result of that denial, all of the rights that they have as original peoples have been eliminated,” Carlos Lara, an anthropologist at the University of El Salvador, told IPS.

The prevailing view in this Central American country is that indigenous people are a thing of the past because due to historical circumstances, they disappeared or merged with the general population, he said.

According to this view, El Salvador’s population of 6.1 million is “mestizo” – an ethnic mix of indigenous people and the descendants of the Spaniards who colonised this territory starting in 1524.

But this essentially denies the existence of native communities.

However, the constitutional reform “puts things to right, because now El Salvador will define itself as a multicultural and multiethnic country,” Lara said.

According to the 2007 census, native people represent just 0.2 percent of the population – a figure that was immediately rejected by indigenous organisations and academics.

Indigenous associations cite instead the 2005 household survey by the Economy Ministry, which put the proportion at 17 percent of the population, mainly Nahua-Pipil Indians in the centre and west of the country, and Lenca and Cacaopera in the east.

There are still towns, like Santo Domingo de Guzmán in the southwestern province of Sonsonate, where indigenous people make up 80 percent of the population, Lara said.

Native peoples were enslaved and exploited by the Spanish colonists and later by the “criollo” – native-born white – elites who governed the country after it gained independence in 1821.

But “more or less in the middle of the 20th century, recognition of indigenous peoples as such began to be lost, and a false conception of ‘civilisation’ began to reign. It was necessary to be very modern and civilised, and to be that, people couldn’t be indigenous,” Lara said.

In 1932, dictator Maximiliano Hernández Martínez crushed a peasant revolt in the west of the country, killing – according to conservative estimates – between 10,000 to 30,000 people.

After the massacre, indigenous people hid their roots, and stopped speaking Náhuatl, their native language, which was banned by the dictatorship.

The Náhuatl tongue was brought to the area that is now Central America by groups who came in the 10th century from current-day central Mexico, where the language is still spoken. But the Pipil or Nawat variety of Náhuatl that was spoken in El Salvador is on the verge of extinction.

There are only some 200 speakers of the language in El Salvador today, according to the Atlas of the World’s Languages in Danger, produced by the U.N. Educational, Scientific and Cultural Organisation (UNESCO).

The Sociolinguistic Atlas of Indigenous Peoples in Latin America indicates that the poverty rate among native communities in El Salvador stood at 38 percent in 2009, compared to less than 19 percent among the general population, while 67 percent of native households had no piped water, against a national average of 39 percent.

But while the constitutional reform is welcomed by native leaders, they say the struggle for the rights of their people has just begun.

Shandur Kuatzín, president of the Union of Indigenous Communities of Guacotecti Cushcatan, said that after native communities are officially recognised, they will begin to fight for real change, such as the recovery of their communally-owned lands, “which were stolen from us by landowners in the early 19th century.”

The land taken from indigenous communities was used to produce export products like indigo and coffee, the foundation of the wealth of the criollo oligarchy of the time.

“It’s a touchy issue, but we are going to hold demonstrations and marches, to get back what was stolen from us,” Kuatzín told IPS. (END)