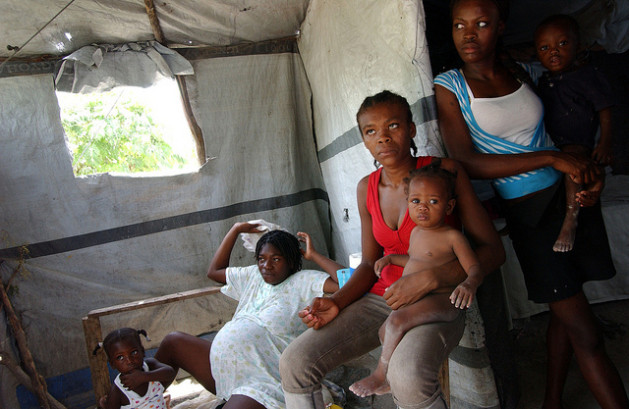 A family inside their home in Cannon Camp in Haiti. Credit: Susan Robens-Brannon/IPS

RIO DE JANEIRO, Jul 18 2013 (IPS) - Several years after the start of the economic crisis in the United States and Europe, which led to a shift in migration patterns, Latin America still lacks a more inclusive view of the phenomenon of people seeking a better life abroad.

This is seen as a critical factor to be discussed at the Regional Conference on Population and Development in Latin America and the Caribbean, to be held Aug. 12-15 in Montevideo, the Uruguayan capital.

In the two decades since the September 1994 International Conference on Population and Development (ICPD) in Cairo, demographers have insisted on territorial inequality as one of the key factors in Latin America driving people to leave their homes in search of better quality of life.

The ICPD redirected the emphasis from demographic goals to rights, said Jorge Rodríguez of the Latin American and Caribbean Demographic Centre.

“The focus became more social, and above all, more about rights,” Rodríguez told IPS. “The conference installed the question of rights on the agenda. And in the last 20 years, the importance of international migration for the region changed.”

Since the economic crisis hit Europe in 2008, there have been signs of slowing emigration from this region, and signs that immigrants are returning, Rodríguez said in Rio de Janeiro, at a Jul. 15-17 preparatory meeting for the regional conference.

“Now we are facing an emerging issue: the return of emigrants due to the economic crisis,” he said. “Latin America extended its migration networks. We are always looking at migration to the United States and Europe, but within the region there is a great deal of migration as well.”

This mobility has taken on more specific features in the case of environmental migrants – people forced to leave their home regions due to sudden or long-term changes to their local environment such as natural catastrophes.

“Now the concept is taking on much greater diversity, and it requires special treatment,” Rodríguez said.

Twenty years since Cairo, progress must be made towards respect for migrants, regardless of their legal status, said demographer and economist Duval Fernándes of the Pontifical Catholic University of Minas Gerais in southeast Brazil, who is also a member of the Latin American Population Association.

The situation of immigrants from Haiti, who fled their country after the devastating January 2010 earthquake, is a reflection of the challenges facing Latin America today.

Haiti’s severe environmental crisis was aggravated by the quake, which killed 200,000 people and destroyed tens of thousands of homes, besides public buildings and infrastructure.

To make matters worse, a number of storms may hit the country in the current Atlantic hurricane season (June to November).

Brazil appeared as an alternative destination for Haitian migrants immediately after restrictions were put in place in the neighbouring Dominican Republic – which shares Hispaniola Island with Haiti – and in the United States.

“The children of undocumented Haitians born in the Dominican Republic are not registered at birth, and are left stateless,” Fernandes said. “This prompted people to seek different destinations, and that’s where the possibility of travelling to Brazil emerged.”

Since November 2010, thousands of Haitians without the proper documents have entered Brazil across the northern border. Small cities in the Amazon hinterland were not prepared for the influx of immigrants, who arrived after complex, often harsh, journeys.

“It has become a calamitous situation,” the Brazilian demographer said. “Our countries don’t know how to deal with this problem.”

The legal process in Brazil has been slow-moving, because Haitians were not granted refugee status. An estimated 10,000 have arrived so far.

“They pay ‘coyotes’ (people smugglers) between 2,500 and 4,000 dollars, for the journey,” Fernandes said. “Multiply that by 10,000 people and we’re talking about 30 million dollars or so. This people trafficking racket has to be dismantled. The Haitians are deceived – they believe they’ll earn 2,000 dollars a month in Brazil.”

The solution found by the government was to grant them humanitarian visas. When they cross the border, the Haitians apply for asylum, and in six months the National Refugee Council rejects the request and refers them to the National Immigration Council, which issues the visas.

“The Haitians may be environmental refugees, but there is no official recognition of that condition. The big problem is that when the visas are finally granted, the people are somewhere else, and in some cases they don’t even find out.”

Fernandes proposed humanitarian policies and measures for Haitians and the creation of special mechanisms to regularise their migration status.

A regional agreement is needed to tackle the question of immigration in a more orderly fashion, said another expert interviewed by IPS, Gabriel Bidegain, technical adviser to the United Nations Population Fund (UNFPA) in Haiti.

“A new human geography” was built in Haiti, because of the high levels of migration to the Dominican Republic and the United States, and later, Brazil, he said.

“Because of the crisis in the United States and Europe, Brazil became the new mecca: it began to be promoted as the ‘golden route’ and Portuguese started to be taught; it made sense that they would come,” he said.

However, the number of Haitians in Brazil is still a far cry from the size of the Haitian diaspora in the Dominican Republic – around 800,000 – and the United States – some 600,000.

And in Haiti, an estimated 400,000 environmental refugees are still living in camps around Port-au-Prince.

Bidegain called for a regional agreement on migration capable of providing a response to the vulnerability of those who are forced to leave their countries, especially because of environmental catastrophes.