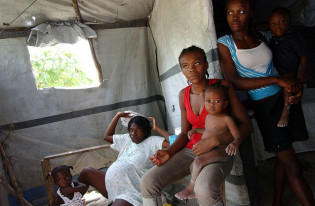 By Correspondents
Almost half of the emergency shelters distributed by the British organisation Tearfund in the mountains above Léogâne remain uninhabited six months after they were built.

By Correspondents
Complete with gallery and garden, the 534 wood and plasterboard houses are arranged in neat rows on a gravel plot of former sugarcane land northwest of the capital.

By IPS Correspondents
The drawdown of hundreds of non-governmental organisations which have been in Haiti since the disastrous 2010 earthquake was inevitable. But with their departure, so too goes their purse and the millions earmarked for cleaning latrines.

By Jim Lobe
International and local human rights groups Tuesday strongly denounced the ruling by an investigating judge in Haiti that former dictator Jean-Claude "Baby Doc" Duvalier should not face charges for massive human rights abuses committed during his 15-year reign, from 1971 to 1986.

By Thalif Deen
The Caribbean nation of Haiti, still struggling to recover from the devastating 2010 earthquake, is once again trying to cope with the sexual abuse of minors by U.N. peacekeepers - for the third time in five years.

By Fabiana Frayssinet
Brazil, for decades a source of migrants to the United States and Europe, is now facing its own humanitarian challenge: applying the international solidarity it trumpets to the Haitians who are arriving in the thousands, in search of a better life.

By Jane Regan and Sylvestre Fils Dorcilus
For two years now, since her husband was one of the estimated 230,000 Haitians killed in the massive earthquake of Jan. 12, 2010 and she and her three children became homeless, little has changed for Dieulia St. Juste.
ADVERTISEMENT ADVERTISEMENT