UNITED NATIONS, Mar 10 2012 (IPS) - In Haitian refugee camps, women are still crammed under plastic or cloth tarps that provide no security and quickly become overheated by the sun. Sexual abuse, harassment, assault and rape run rampant, even as political responses to these dangers have stalled. But KOFAVIV, a women’s organisation founded by and for rape survivors, offers a glimmer of hope. 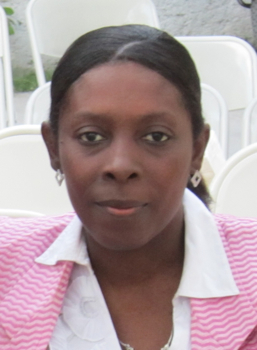 Eramithe Delva, founder of KOFAVIV, a Haitian women's organisation founded by and for rape survivors. Credit: Courtsey of KOFAVIV

“Women are living in harsh and degrading conditions in the displacement camps,” said Eramithe Delva, co-founder of KOFAVIV (Commission of Women Victims for Victims).

The lack of sanitation infrastructure forces women to walk long ways to reach bathrooms and showers, even when it’s “pitch dark after sunset”, she explained, since some camps have no lighting at night.

“Women are scared to walk by themselves at night because of that; they are scared that people will walk into their tent and rob or hurt them,” she added.

Other problems relate to children, education and income. Mothers “have the choice of staying in or around their tents to stay with their children, or leave them behind with a friend or a neighbour to be able to try and make a little bit of money”.

IPS spoke with Delva about how a women’s organisation founded “by and for rape survivors” is trying to make a difference while political decision makers remain, for the most part, idle.

Q: In a recent report, you shed light on survival sex, a problem for displaced women and girls that has gone neglected. What has changed since that report? A: “Survival sex” occurs when women and teenage girls have no other options but to sell their bodies to make a little bit of money to provide for themselves and their families. Although they are similar, we consider “survival sex” to be different than prostitution or sex work, because the person engaging in the sexual exchange did not choose to do it willingly.

Most, if not all, of the women and girls engaged in survival sex have told our outreach workers that they don’t like doing it, and that they would stop if they found another way to provide for themselves and family members.

Since the report, nothing has really changed. Reports aren’t going to change anything by themselves; it is through direct work and activities within the affected communities that we can start seeing changes.

Our network of outreach workers lives in the camps and in the poor communities, so this is part of their daily lives, and they will tell you that not much has changed. KOFAVIV has provided shelter for young women and young mothers who are (or have been) engaged in survival sex, but a lot more needs to be done to change that.

Q: What are main causes of this problem and what must be done to tackle them? A: There are many different causes. We consider poverty, the lack of access to economic opportunities and all the accompanying complexities to be the main ones.

It will be very difficult to solve this problem because it exists on so many levels, but we think that there needs to be an infrastructure created to support and provide relief for the young women engaged in survival sex.

First of all, they need to be able to finish their studies. A lot of the young women and girls who come to the KOFAVIV Centre have told us that they are engaging in these activities to be able to pay for their school fees.

They need to be taken out of the camps and placed in secure housing. There need to be programs and activities where they can receive counselling and medical services, where they can participate in trainings and classes to learn skills that they could apply to income generating activities.

Q: Fighting sexual violence is high on the political agenda in Haiti, at least rhetorically. What kind of governmental support have you observed reaching out to women in camps, including survival sex? A: There have been talks of combating sexual violence but I have not seen any concrete plans or activities being implemented by the government. As a grassroots organisation working directly in the affected areas, we have not seen much change. Most people displaced by the earthquake are still living in horrible conditions.

Q: Where you have seen major progress being made? A: In terms of our organisation, KOFAVIV has been able to make a lot of progress and to make a difference for survivors of sexual violence.

We provide legal services and accompaniment to victims of gender-based-violence (GBV), with the support of the Bureau des Avocats Internationaux (BAI). Through this partnership, our legal unit of outreach workers accompany the survivors to report her attack, to file a complaint and to go to trial to pursue her aggressor.

From 2004 (KOFAVIV’s inception) to 2010, we barely had ten cases make it to the justice system. Since the earthquake, from 2010 to 2012, we have had about 200 cases that have made it through the justice system, five of which are awaiting a ruling.

It might not seem like a lot compared to the number of women and girls that have come forward, but to us that is a great accomplishment.

Because of our presence in the camps and throughout the communities, rape survivors know about us and the type of work that we do; they are coming forward and talking about their attacks.

Survivors of sexual violence (rape, sexual assault, conjugal violence, etc.) are sometimes humiliated and shamed by their communities so they often kept their abuse a secret. But now, to see women and girls come to our centre or call in to our call centre to report abuse and to seek help and justice is great progress.

Furthermore, our emergency shelter in the centre is open to survivors of sexual violence if they feel it is too dangerous for them to go back to their home or tent. They can stay safely at and participate in all the services and activities offered by KOFAVIV.