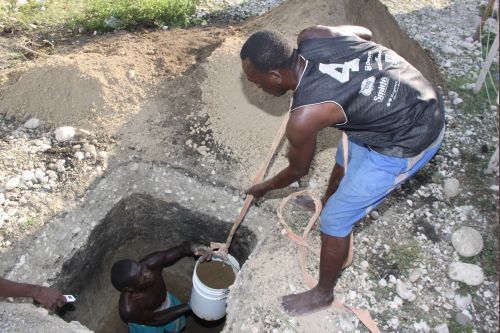 TABARRE, Haiti, Mar 7 2012 (IPS) - Complete with gallery and garden, the 534 wood and plasterboard houses are arranged in neat rows on a gravel plot of former sugarcane land northwest of the capital.

At first glance, all seems normal in this new community, or as normal as anything has been in a country that suffered a 7.0 earthquake 26 months ago.

In most camps, refugees complain because they are still living in tents. Not here.

At the Tabarre Issa camp – built by the Irish humanitarian organisation Concern Worldwide for a total cost of over three million dollars – the complaints centre not on the new 5,000-dollar “transitional shelters” that serve as homes to about 2,500 people. Instead, they target the new-fangled “ecological toilets” inside their homes: one in each of the 534 homes meant to last three years.

“No! I am not used to that sort of thing! No! This is not possible!” said resident Sherline Aldorage about the “UDT” or Urinary Diversion Toilet that came with the two-room home she moved into last year.

In the Cul-de-Sac plain west of the capital, the water table is very close to the surface. The state agency responsible for water and sanitation – the National Directorate Agency of Water and Sanitation (DINEPA in French) – is concerned.

"DINEPA has forbidden people to dig pits for their flush toilets," Johanne Laroche, local liaison for the city of Tabarre, told HGW. "We recommended to all NGOs (non- governmental organizations) use the "TUFF TANK" (giant, easy to empty plastic container) in their camps to avoid contaminating the water table which is very high in that region."

But there are no organizations working at Tabarre Issa. Concern is gone.

Tabarre City Hall and DINEPA don’t know what to do.

"We don’t have any money left, the NGOS are pulling out," Laroche said. "We know that should prohibit people from digging pits, but where are they going to the bathroom?"


Like scores of her neighbours, Aldorage has gone much further than refusing to use the UDT, which separates urine from fecal matter, sending them into, respectively, a plastic bottle and a plastic bin which then need to be emptied. [See box]

Repulsed by the process, Aldorage ripped the gift toilet from its foundations and threw it away.

Worse, she and scores of her neighbours have replaced them with flush toilets that empty into pits they’ve dug themselves into the former farmland.

Camp residents’ refusal to use the UDT system does more than highlight the risks run by aid organisations who fail to get beneficiaries on board a project, it has created a new risk that threatens to spread beyond camp boundries.

Tabarre Issa is not out in the middle of nowhere. It sits right atop the aquifer that supplies much of the capital’s water supply; dozens of trucks fill up in Tabarre every day.

The human excreta landing in the unlined pits likely carries various pathogens and, because of Haiti’s October 2010 cholera outbreak, it may also carry the vibrio cholera germ. The potential health consequences are immeasurable.

But Tabarre Issa residents appear to be more concerned about their immediate situation. The president of the camp management committee, Jean Auguste Petit-Frere, shares Aldorange’s sentiment.

“These toilets spread flies, cockroaches and odors,” he fumed. “They impact health. I can no longer breathe in my house.”

A survey conducted in January by Haiti Grassroots Watch (HGW) of 50 families of the Tabarre Issa camp – about one-tenth of all residents – uncovered three major complaints: odor, pollutants and cockroaches.

And it uncovered much worse: Only two percent of them actually used the UDT toilets and most – 90 percent – said they had already replaced them with flush toilets.

Behind the toilet revolt

Why such distrust – revolt even – against a system which has been proven to be effective, and accepted, around the world?

Certainly, ecological toilets are a novelty in Haiti and require some maintenance. But it is also true that beneficiaries have ingrained sanitary habits and these toilets – for all their ecological logic – demand that people learn new habits.

Concern hired a trainer – Maryse François – to explain to Tabarre Issa residents how to use the new ecological toilets. But she herself was never able to master the system.

“I was a Concern training officer and even I couldn’t adapt to this latrine. For a person who did not follow the training, it was worse!” she said. “No one who was using this system in the camp could adapt to it. It was a waste.”

Concern Worldwide – which has been working in Haiti in many domains since before the earthquake – knows about the problem, but notes that the UDTs were the only toilet option for camp residents, who asked that each small house be equipped with a private privy.

“It’s a transitional shelter, its not a permanent residence… if you look at the options, to put in a flush toilet… the feasibility of it is not there because of the cost,” Concern’s Nick Winn explained.

“If we had wanted to install the necessary water system, we would not have been able to convince a donor,” Concern assistant director Jean Frenel Thom added. Rather than 5,000 dollars each, the cost per house would have gone up to 7,500 dollars, according to Thom.

The UDTs were “the safest and cleanest option that was available as far as security and hygiene,” Winn chimed in. “Hygiene-wise it is just completely 100 percent sound.”

But if Concern gets a 100 percent grade for hygiene, it gets a zero percent for participation.

And there lies the fatal flaw: the Irish organisation appears to have failed to involve the population in its choice of the new toilet system. All 50 of the displaced families questioned by HGW said that they had not been consulted.

Little participation, a lot of condemnation

The need for community participation in development projects – and especially ones involving personal habits – is well established.

Study after study recognise that the idea of new toilets should be culturally accepted by the recipients first.

“The most important factors in getting a public to accept an ecological system are traditional attitudes and taboos related to defecation and excreta,” according to a 1998 study from the Swedish International Development Agency (SIDA). “If users are not implicated in the choice of an alternative ecological toilet system, cultural barriers can result in the blockage of the project.”

“These toilets were imposed,” said Diana Paul, a former Bourdon Valley resident who made a living selling charcoal before the earthquake. “They did not ask our opinion. We would have told the trainers that we didn’t want this model.”

Concern doesn’t deny the allegations, but condemns the actions taken by residents.

“They took it upon themselves to replace the systems that were installed in their homes. Is it Concern’s place to prohibit them from doing this? They’re just replacing them. We can’t do anything about it because officially, Concern doesn’t manage this camp any more,” Thom explained.

Winn is worried: “If you are putting water into a pit, it won’t take a lot to fill it up.”

One of Concern’s partner organisations, the U.S.-based Sustainable Organic Integrated Livelihoods (SOIL), which works in ecological sanitation, was well aware of the environmental danger. At meetings and in emails, SOIL repeatedly warned Concern about the inherent complexities of getting 534 families to accept UDTs.

“We suggested that Concern do a pilot project to receive feedback from the users before embarking on a large scale programme,” SOIL director Sasha Kramer recalled. “But people were already in their homes.”

Concern contacted SOIL just three weeks before the toilets were to be completed, asking for help. The organisation turned down the request, saying that an effective awareness campaign was impossible to complete in only 21 days.

Winn conceded that many camp residents don’t use the UDTs.

“They could be more successful. Definitely… the use could be better,” he said.

His colleague Thom jumped in: “Yes, we are aware there is a problem. We recognise it here at Concern… Like all humans, we made mistakes, but we don’t consider Tabarre Issa a failure.”

And with its 534 homes and their gardens, the camp is not “a failure”.

Not surprisingly however, Concern has changed its practices for other camps.

“We are currently working with SOIL on a smaller camp. We plan to improve our education and see how we must transmit information adapted to the culture,” Winn assured. [See box]

But the improvements are for other camps. It’s too late for Tabarre Issa.

“Officially, we don’t manage the camp anymore. We have no rights over the houses,” Thom explained. “This is why we think that the government or DINEPA (the state water and sanitation agency) should come in.”

But do Haiti’s weak and underfunded authorities have the resources necessary to address the serious environmental threat that hangs over this major water resource for the capital?

*Haiti Grassroots Watch is a partnership of AlterPresse, the Society of the Animation of Social Communication (SAKS), the Network of Women Community Radio Broadcasters (REFRAKA) and community radio stations from the Association of Haitian Community Media.

This report made possible with the support of the Fund for Investigative Journalism in Haiti http://fijhaitienglish.blogspot.com/

It is the second of a two-part series on water and sanitation problems in Haiti.