UNITED NATIONS, Jan 23 2012 (IPS) - The Caribbean nation of Haiti, still struggling to recover from the devastating 2010 earthquake, is once again trying to cope with the sexual abuse of minors by U.N. peacekeepers – for the third time in five years. 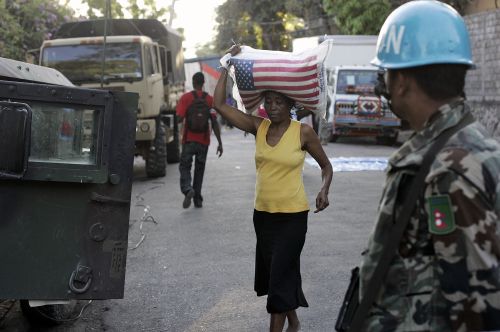 U.N. peacekeepers and U.S. soldiers secure a food distribution point in Haiti in the aftermath of the Jan. 12, 2010 earthquake. Credit: UN Photo/Sophia Paris

“The United Nations is outraged by these allegations and takes its responsibility to deal with them extremely seriously,” U.N. spokesman Martin Nesirky told reporters Monday.

In view of the gravity of the situation – and the recurrence of sexual abuse by peacekeepers in Haiti – the United Nations has already dispatched a team of officials to the Haitian capital of Port-au-Prince “to investigate these allegations with the utmost determination”.

MINUSTAH is emphasising the responsibility and accountability of the chain of command in both preventing and taking prompt action when such allegations arise, Nesirky said.

The mission will take action to support the alleged victims, he added. But he did not disclose the nationalities of the police officers involved.

Unlike cases involving U.N. military personnel – who are answerable only to their home countries – investigations into allegations involving U.N. Police fall under the responsibility of the United Nations.

The civilian and police personnel serving in peacekeeping missions are treated as international civil servants under the authority of the United Nations.

Mariano Fernandez, the secretary-general’s special representative and head of MINUSTAH, said: “I want to reiterate my commitment to uphold the policy of zero tolerance of abuse by the staff of the Mission.”

Each member of the U.N. personnel, whether he or she is a civilian, member of the military or police, must observe a standard of exemplary conduct, he added.

“This is a commitment that is required when joining the United Nations, anywhere in the world.”

“We will continue to take the strictest measures to ensure, where appropriate, that the perpetrators of such acts are punished with the utmost severity,” he added.

Back in November 2007, about 108 military personnel from Sri Lanka serving in Haiti were deported to their home country after being accused of sexual exploitation and sexual abuse of minors.

One of the expelled peacekeepers was quoted in a local newspaper as saying, rather defiantly, “What do you expect us to do when the U.N. is providing us with free condoms?”

Last year, five U.N. peacekeepers from Uruguay were accused of sexually assaulting a Haitian teenager, which was caught on tape, triggering public demonstrations and anti-U.N. protests in the streets of Port-au-Prince.

But early this month, all five were freed by a Uruguayan military court because the 18-year-old Haitian victim could not be traced.

The Uruguayans have promised to re-open the case if the youth appears in court.

In 2007, it was reported that girls as young as 13 were having sex with U.N. peacekeepers in Haiti for as little as a dollar, Ezili Dant, president of the Haitian Lawyers Leadership Network (HLLN), said in a letter to the United Nations.

The continued sexual abuse of minors in Haiti – and also in other peacekeeping missions in the Democratic Republic of Congo (DRC) and Cote d’Ivoire – has alarmed the United Nations.

Allegations of abuse have dogged U.N. peacekeeping missions since their inception over 50 years ago.

The issue was thrust into the spotlight after the United Nations found, in early 2005, that peacekeepers in Congo had sex with Congolese women and girls, usually in exchange for food or small sums of money.

The U.N. peacekeeping department instituted a “zero tolerance” policy toward sexual abuse, a new code of conduct for its more than 110,000 peacekeepers deployed around the world, and new training for officers and all U.N. personnel.

But that has not deterred the continued sexual abuse of women and minors in peacekeeping missions worldwide.

The United Nations says it has done much to confront the problem since 1999, when U.N. peacekeepers in Bosnia were reported to have been involved in a sex-trafficking ring.

In 2003, the United Nations issued a “zero tolerance” policy for sexual exploitation and abuse.

Currently, all peacekeepers undergo extensive training with a major focus on sexual conduct.