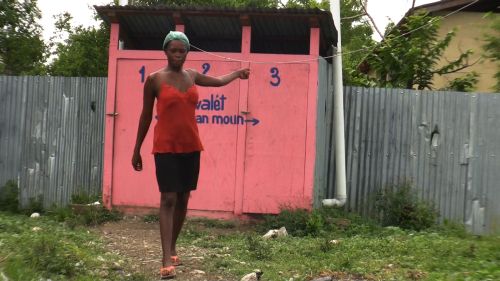 PORT-AU-PRINCE, Mar 7 2012 (IPS) - The drawdown of hundreds of non-governmental organisations which have been in Haiti since the disastrous 2010 earthquake was inevitable. But with their departure, so too goes their purse and the millions earmarked for cleaning latrines.

What does that mean for the half a million displaced still living in camps?

Some 11,000 mobile toilets were installed by a rainbow of international non-governmental organisations (NGOs) following the earthquake. Supplied largely by the Clinton Foundation, the U.S. Agency for International Development and UNICEF, and then redistributed by the NGO community to hundreds of camps, these latrines improved the living conditions and staved off pending health problems for some of the 1.5 million who were displaced.

Now, donor dollars are drying up even as toilets overflow. It’s one thing for the funders to cinch their belt; it’s another for those in the camps.

Because of the sheer number of people and organisations involved in human waste disposal, it’s nearly impossible to calculate how much has been spent over the last two years. Dozens of NGOs signed contracts with local companies to empty the latrines; eight dollars a day per toilet, or 125 dollars to empty a 125-gallon drum of sewage.

Each agency or organisation has its own tab. UNICEF spent 1.4 million dollars cleaning portable toilets over the last two years; the French Action Against Hunger (ACF) invested 2.675 million dollars in sanitation, most of which went for cleaning latrines. The Federation of Red Cross and Islamic Red Cross spent 55 million dollars for water and sewage treatment through September 2011.

“It’s important not to focus on the money but on the sanitary catastrophe that was avoided,” said Moustapha Niang, UNICEF’s hygiene, water and sanitation consultant.

“In an emergency situation, you have to respond quickly to save victims. This is always costly, but not sustainable. Everyone knows that,” said Anne Charlotte Schneider, head of Haiti’s ACF’s mission.

If sustainability were the name of the game, however, everyone would also know this approach was all wrong. Temporary latrines are just that – temporary. But because many of the camps were on private land, a temporary solution was the only one considered.

“When it’s impossible to build a sustainable infrastructure, we went with mobile toilets even though they were most costly,” said Peleg Charles, communications director for OXFAM, which worked on waste disposal in 123 camps.

Sanitary engineer Frantz Benoît, of the Haitian Association of Sanitary Engineering and Environmental Sciences, said that if there had been a sewer system, the task of managing the human waste would have been easier.

Prior to the quake, only 17 percent of the capital’s population had access to a standard flush toilet, so it was foolish to think that suddenly 1.5 million newly homeless could be connected to what was at best an antiquated sewage system. The Haitian authorities had neither the means, nor the technical competence, to do so. “Since there wasn’t (a sewer system), that meant that the NGO community, which came to help us, had to use what was available,” Benoit said. “The only criticism one can make of them is how the toilets were distributed among the camp dwellers.”

Distribution was as erratic as the earthquake’s aftershocks.

ACF identified one hundred families for only two latrines in a southern suburb; in the capital centre the latrines, stamped with the donor’s logo, surrounded camp perimetres like sentinels, but rarely was the international SPHERE standard of one toilet per 20 people – by gender – respected. Most residents use plastic bags.

In the case of Camp Acra, in the residential neighbourhood of Delmas, the ravine behind the camp is the resident “plastic bag” dumping ground.

“Besides the Haitian Red Cross and Samaritan’s purse (who gave us some things), we did not receive any support,” said 27-year old James Pierre, a Camp Acra resident. “And for the last year, they are gone along with their resources. Since then, we’ve been forgotten entirely.”

The most recent NGO to jump ship is the International Rescue Committee (IRC), which, as of Jan. 30, 2012, stopped all water and sanitation related activities in 31 camps in the metropolitan Port-au Prince region. IRC says it transferred its responsibility to either camp management committees, or the state agency: the National Directorate Agency of Water and Sanitation (DINEPA).

ACF will soon follow suit. At the end of the month it will stop emptying the portable toilet units at Champs Mars, across from the crumpled national palace.

To date, ACF has installed some 682 units in about 40 camps. According to its two-year financial sheet, the agency claims 800,000 people benefited from its services. In addition to Champ Mars, Schneider said ACF has also transferred latrine cleaning in all its other sites to DINEPA.

But DINEPA said it is not aware that it’s responsible for the formerly ACF-serviced latrines.

“The only officially registered transfer to date has been that of the Federation of Red Crosses,” said the DINEPA’s director of sanitation, engineer Edwige Petit, when questioned about the number of NGOs still present in the camps.

According to the International Organisation for Migration (OIM), there are still 490,545 people living in over 650 camps in the earthquake zones. Latrine cleaning was down 18.1 percent from the month before. And a bulletin recently published by the U.N.’s Organisation for the Coordination of Humanitarian Assistance (OCHA) states that “356 latrines are going to be removed.”

“We are working with earthquake victims to return home,” said ACF’s Schneider. “We are now working on a multi latrine project (five families per latrine) for a total of 600,000 dollars.”

With the absence of data, it’s hard to compare sanitation before and after Haiti’s earthquake, but with an extensive outreach campaign it appears that there is better sanitation awareness among the population. And more tangibly, there is an excreta treatment center in Morne-à-Cabri north of the capital.

UNICEF, the European Union’s humanitarian branch, OCHA and the American Red Cross have earmarked 2.6 million dollars for the centre, which receives between 30-50 barrels of excreta every day. A soon-to- be released report by the U.N.-led group of non-governmental and governmental agencies working in water and sanitation (the WASH Cluster) says that 17,000 cubic metres of excreta have already been treated since the launch of operations three months ago.

Morne-à-Cabri’s sewage treatment plant is the first of its kind in the country. A second one is under construction in Titanyen, funded by the Spanish cooperation.

Ironically, the new plant does not receive excreta from the camps in the surrounding areas. Like much of the population, residents in nearby camps have no access to functioning latrines. And because public washrooms are not yet part of any national programme, they are also missing from public markets, bus stations, schools and churches.

With bilateral funding and financing from the Inter-American Development Bank, UNICEF and the American Red Cross, DINEPA is executing its 2012-2014 action plan to increase its sanitation work across the country.

But as necessary and ambitious as this plan is, it doesn’t address the challenges facing the 490,545 people living in squalid camps. Where will they go when the need to go?

*This article has been made possible with support from the Fund for Investigative Journalism in Haiti, www.journalismeinvestigationhaiti.blogspot.com.

It is the first of a two-part series on water and sanitation problems in Haiti.