MONTEVIDEO, Aug 16 2013 (IPS) - Representatives of 38 countries of Latin America and the Caribbean meeting this week in the Uruguayan capital urged governments in the region to consider modifying their laws on abortion, which are among the most restrictive in the world.

The Montevideo Consensus on Population and Development calls on “States to consider amending their laws, regulations, strategies and public policies relating to the voluntary termination of pregnancy in order to protect the lives and health of women and adolescent girls, to improve their quality of life and to reduce the number of abortions”.

The document was adopted at the end of the first session of the Regional Conference on Population and Development in Latin America and the Caribbean, which ran Monday through Thursday.

Daptnhe Cuevas, of the Latin American and Caribbean Women’s Health Network, said their reaction to the outcome of the conference was “jubilation.” 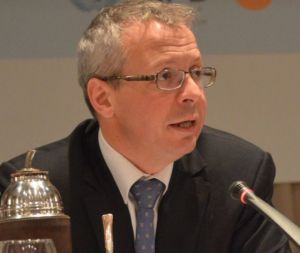 Uruguay’s deputy minister of health, Leonel Briozzo, presided over the regional conference on population and development. Credit: Courtesy of the Public Health Ministry

We feminists came here with a series of clearly outlined proposals that were taken up integrally by the governments, which sent out a strong signal to the world that in Latin America, women’s rights are on the rise.”

Speaking with IPS just after the negotiations came to a close, the Mexican activist described the result as “a resounding success” and praised the governments for “rising to the demands.”

The Montevideo Consensus also urges the governments to “Ensure, in those cases where abortion is legal or decriminalised under the relevant national legislation, the availability of safe, good-quality abortion services for women with unwanted and unaccepted pregnancies”.

In Latin America, first-trimester abortion is only legal on demand in Cuba, Mexico City and, since 2012, Uruguay. In the rest of the countries, it is only allowed in exceptional cases – such as risk to the mother’s life or rape – or under no circumstances at all, such as in Chile, the Dominican Republic, El Salvador and Nicaragua.

This week’s meeting, organised by the Economic Commission for Latin America and the Caribbean (ECLAC) and the Uruguayan government with support from the U.N. Population Fund (UNFPA), also brought together 24 regional and international agencies and 260 non-governmental organisations.

The document contains over 120 measures concerning the eight priority areas to follow up the Programme of Action of the International Conference on Population and Development (ICPD) held in Cairo in 1994.

The recommendations will be the input of Latin America and the Caribbean to the meetings of the U.N. Commission on Population and Development and the General Assembly, to be held in New York in April and September 2014, respectively.

The participants in the meeting numbered over 800, which made it one of the largest intergovernmental conferences in recent years in the region, according to ECLAC.

Cuevas said central demands of the women’s movement were echoed. The final document reaffirmed, for example, the concept that “a secular state is an indispensable condition for the rights of women to be exercised.”

The Montevideo Consensus states that “a secular state is one of the elements fundamental to the full exercise of human rights, the deepening of democracy and the elimination of all forms of discrimination”.

At the close of the conference, Uruguay’s deputy minister of public health, Leonel Briozzo, said the agreement was a sign that “Cairo isn’t moving backwards, but forward.

“We significantly expanded on what Cairo set forth, and we did so from a diversity of viewpoints that were completely respected. As a region that carries the sobriquet of inequality, we are giving an example of democracy,” he said.

“We were able to reach an agreement where no one was trampled on and no one was ignored. This collectively-built construction reflecting agreement on more than 130 points was made by all of us together. It is ours, and it is for the world as a whole.”

The countries also agreed to apply a human rights approach with a gender and intercultural perspective when dealing with population and development matters.

They also committed to spend more on youth, especially in public education, and to implement comprehensive sexual and reproductive health programmes, with a priority on prevention of teen pregnancy.

In addition, they agreed to adopt measures to ensure better quality of life for the elderly.

Another stride forward underscored by Cuevas was the recognition of sexual rights and reproductive rights as separate concepts.

“We took another step forward by recognising them separately,” she said. “What was approved 20 years ago in Cairo referred to reproductive, but not sexual, rights.

“Information has advanced, we have clear concepts, and we know that sexual rights are not necessarily linked to reproduction,” she added. “They’re different issues dealing with different bearers of rights, and on this occasion we managed to get that reflected in the agreement.

“The discussions were very different from discussions at past conferences. I think the tone changed substantially, and it changed because women were seen as people of flesh and blood,” she said.

The declaration also clearly states, she said, “the right to sexual orientations and gender identities. Gender identity can be varied, and the effort had never been made to mention that in a regional accord. That was included for the first time; we had no precedent in any previous consensus, and it is very important.”

Teresa Lanza, head of Católicas por el Derecho a Decidir/Bolivia – the Catholics for Choice partner in Bolivia – told IPS that “the next step is for this to be translated into political will and big enough budgets to ensure that everything that was achieved here truly works and becomes a reality for all women in Latin America and the Caribbean.”

The activists attributed a large part of the advances made to Uruguay’s leadership. Cuevas said that “In the United Nations system, we generally find that the base document doesn’t really tread too much on anyone’s toes, and if you start to compromise, you won’t necessarily win.

“Uruguay set a high starting point, and that made less strident, ideological positions possible in the negotiations and dialogue,” she said.

Point 88 of the declaration calls on countries to “Respect and guarantee the territorial rights of indigenous peoples, including those of peoples living in voluntary isolation and those in the initial phase of contact, with special attention to the challenges presented by extractive industries and other major global investments”.

Chile had initially voiced reservations regarding this point.

Quechua activist Tania Pariona of the Network of Organisations of Indigenous Youth of Peru told IPS that “the work here was collective.”

“The states were fairly open to civil society,” she said. “There has been a good reception, a good vision of what is wanted for the future of the region, and that’s a step forward.”