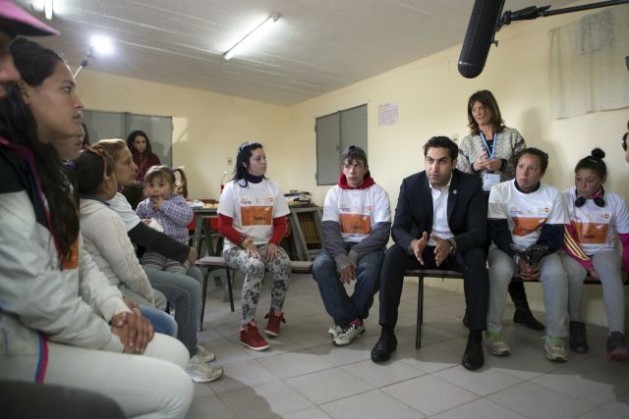 MONTEVIDEO, Aug 13 2013 (IPS) - Shortcomings in the educational system in Latin America and the Caribbean fuel inequalities that remain hurdles to access to the labour market and safe sex for a large part of the region’s youth.

Around half of the region’s sexually active youngsters have never used any form of birth control, and an estimated 20 percent of children in the region were born to mothers between the ages of 10 and 19.

The HIV/AIDS rate, meanwhile, has declined but remains high: some 250,000 Latin Americans aged 15 to 24 are living with HIV.

These statistics were reported at the first session of the Regional Conference on Population and Development in Latin America and the Caribbean, running Aug. 12-15 in Montevideo, the capital of Uruguay.

Marcela Suazo, regional director of the United Nations Population Fund (UNFPA), said the problem is that “there is insufficient access to sex education in the region.

“Sex education is still missing from the basic national curriculum in many public schools, although some private schools are providing knowledge and information,” she told IPS.

Suazo said that as medical care continues to advance, education and information on sexual and reproductive rights remain limited, which makes it difficult for young people to receive adequate attention.

The UNFPA official took part in a forum Monday to mark World Youth Day – observed Aug. 12 – ahead of the regional gathering.

This week’s meeting, which is assessing the progress made in implementing the Programme of Action of the International Conference on Population and Development (ICPD) held in Cairo in 1994, is organised by the Economic Commission for Latin America and the Caribbean (ECLAC) and the Uruguayan government, with support from UNFPA.

“Adults behave differently with people who we consider young and less prepared, who are thus treated in a prejudiced manner,” she said.

But even when good sexual and reproductive services exist, many young women do not use them because they fear they will be judged because of their sexual behaviour, she said.

“We need to overcome this barrier because it’s directly related to teen pregnancy, to the reproduction of poverty and inequality, which is a pending challenge for Latin America and the Caribbean,” she stressed.

Limitations on the sexual and reproductive rights of young women in Latin America directly influence their chances of completing their studies and avoiding poverty.

In this region, between 15 and 40 percent of young women say their first sexual experience was forced, while nearly 30 percent of adolescent girls are married before the age of 18.

“We believe it’s fundamental for young people to know more about their bodies,” he told IPS. “Every six minutes a young person is affected with HIV/AIDS and this is unacceptable. These are dangerous numbers. We believe by providing tools and information we’ll be able to tackle this issue.”

According to figures from the ICPD high-level task force, the region is experiencing the largest youth cohort in history: Of the 600 million people in Latin America and the Caribbean, more than 26 percent are aged 15 to 29 – a demographic boom that should be harnessed, experts say.

But youth unemployment is the expression of a gap between education and the labour market.

“The education system is not equipping young people with the skills and the knowledge that they need to enter the labour market. This mismatch is daunting and shrinking young people’s chances to get decent job opportunities,” Alhendawi said.

“Globally, 73.4 million young people are unemployed, and this is a number that requires all of us to respond quickly to this problem,” he added.

Alhendawi underlined the importance of increasing investment in this age group, and called on governments and private institutions to provide financial services to enable young people to set up their own businesses, so that they can stop being job-seekers and become innovators and job-creators instead.

In Latin America and the Caribbean, only 10 percent of young people work in the formal economy, Suazo noted.

Young people “are the first to lose their jobs when there are cutbacks,” she said. “And when they want to get a formal sector job, they face requisites, like five years of experience, when they are just coming out of the university.”

Besides, she added, “we are facing a new industrial-technological revolution. Education systems should be reviewed so that they allow the development of the necessary skills, capacities and knowledge for young people to take part in this innovation.”

The UNPFA official acknowledged that education has improved in certain respects in Latin America. For example, 95 percent primary school enrolment has been achieved.

“But when we look at the secondary and university levels, the numbers start to come down considerably,” she said.

“Primary education does not manage to develop the necessary competence and skills for people to take part in development processes in productive areas,” she said.

The secretary general of the Ibero-American Youth Organisation (OIJ), Alejo Ramírez, urged governments to put a priority on youth when it comes to spending.

“The economic growth seen in Latin America in recent years has helped develop many sectors. But the youth, who are hardest hit by unemployment and inequality, are the last to be reached by public spending,” he lamented.

Only an estimated 20 percent of social spending benefits people under the age of 30, he said.

The OIJ also presented the First Ibero-American Youth Survey. Ramírez told IPS that the study’s main finding was that two out of three young people believe that in five years they will be better off, “pointing to a strong degree of optimism.”