WASHINGTON, Nov 13 2012 (IPS) - New data from the World Bank shows that the middle class in Latin America has expanded substantially, growing by 50 percent over the past 10 years despite decades of sluggish poverty reduction. 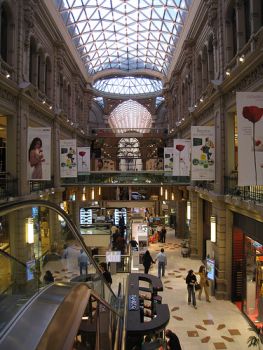 Shoppers at the Galerias Pacifico mall in Buenos Aires. Credit: Alicia Nijdam/cc by 2.0

Yet those optimistic findings are tempered by analysis suggesting that, while some 50 million people are thought to have escaped poverty during that period, many did not move directly into the middle class. Rather, today they make up a demographic that the bank is calling the “vulnerable” class, which currently constitutes the region’s largest socioeconomic group, around 38 percent of the regional population.

Further, much of the region’s growth was fuelled by a strong international economic performance. How the region’s governments move to extend these trends in the face of weaker economic output will do much to determine the extent to which the recent gains can be consolidated.

“Because of the eurozone crisis, many countries are thinking very much in the short term. But Latin America, because of years of efforts, has the luxury to think more long term, and that’s important for the region,” World Bank President Jim Yong Kim said at the bank’s Washington headquarters on Tuesday, unveiling a new report.

“The reasons behind this change include sustained growth, employment generation and falling inequality … but countries must still focus on the seven percent of the population that doesn’t have access to clean water and the 20 percent that lacks access to sanitation.”

By 2009, roughly 30 percent of the Latin American population had moved into the middle class, defined by the bank as having less than a 10-percent chance of falling back into poverty. Some countries posted particularly large numbers, such as Colombia, where 54 percent of the population experienced upward mobility, and Brazil, which on its own made up 40 percent of the overall regional changes.

The new study reports that the Latin American middle class expanded to around 152 million people by 2009, growing from 103 million in 2003. Other analysis has highlighted the important role that women have played in this poverty reduction.

“Latin American women have been responsible for 30 percent of the region’s extreme poverty reduction in the past decade, as a result of their increased workforce participation and higher earnings,” Stephanie Leutert, a research associate at the Council on Foreign Relations, a Washington think tank, wrote Tuesday.

“As in other places, the global economic downturn hit men’s incomes the hardest. In response, Latin American women picked up the slack, causing more than half of 2009’s poverty reduction.”

“Latin America for years was one of the world’s most unequal regions, but now is one of the few, if not the only, regions where inequality is falling – that’s a remarkable phenomenon,” de la Torre says.

“A society with a growing middle class is more likely to reduce … inequalities, and it is widely recognised that the middle class is an agent of stability and prosperity. For a middle-income region such as Latin America, a larger middle class has crucial implications.”

Still, de la Torre is urging caution against “calling this a victory”, for at least three reasons.

First, a weaker international economic situation would require a range of strong policymaking from national governments, with the bank particularly focusing on reforms to social protection systems and creative new investments in education.

Second, while the statistics from the past decade record very little downward mobility across Latin America, there is still very little starting gate equality in the region, with birth circumstances remaining extremely important.

“Sadly, family background still matters too much with regard to how you will do in life in Latin America,” de la Torre says. “In this sense, the poor suffer a double whammy – they’re poor and thus have lower education, but they are also likely to stay there. Now, this has been improving, though perhaps too slowly.”

Third, and perhaps most complicated for policymakers, members of the new middle class have shown little inclination to use their strengthened influence to pressure national governments into improving public services and institutions. Indeed, many are choosing to ignore government services as much as possible.

Around the world, as middle classes begin to make up a larger share of societies, the trend has been to see a strengthening of democratic institutions, lower levels of corruption, and better quality of public services. The bank refers to this as a virtuous circle.

As yet, however, the Latin American middle classes do not appear to be contributing to institutional capacity improvements at rates seen elsewhere.

“This is worrisome – as people enter the middle class in Latin America, rather than engaging in institutional improvement, they tend to opt out from public services,” de la Torre says.

Rather than agitating for better schools, police or electrical grids, for instance, many in the new middle class are choosing to patronise private schools or private security companies, or to purchase a diesel generator.

This results in little appetite from the middle class to pay taxes. Other than Brazil, Latin American governments are currently collecting taxes equivalent to around 17 percent of gross domestic product, while most Western countries take in twice that amount.

“Latin America might be running the risk of moving into an era of poor-quality public services coupled with low use by the middle class, resulting in a low willingness to change,” de la Torre says. “The virtuous circle may be eluding us.”

The new report also calls on lawmakers to explicitly incorporate the goal of equal opportunities into public policy. According to World Bank President Kim, this is not just a moral but also an economic issue.

“Countries that have focused on reducing inequality have seen that this is actually good for economic growth,” he said Tuesday. “Evidence from the last decade in Latin America is clear: the path to growth must include many more people.”