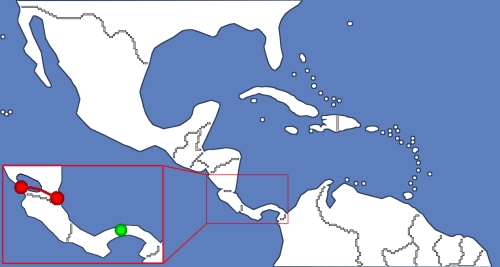 GUATEMALA CITY, Nov 1 2012 (IPS) - From satellites to inter-oceanic canals, the most innovative or ambitious investments in Central America are coming from China – even though six of the seven countries in this sub-region do not have diplomatic ties with the Asian giant.

But Central America is failing to convert China’s major expansion in trade and industry here into increased exports to that giant market.

“China’s interests have grown, and like any world power, what it has to sell is more than it wants to buy,” Jesús Garza told IPS. The cooperative he belongs to forms part of the Association of Non-Governmental Organisations of Honduras, which promotes sustainable business development.

In eastern Honduras, for example, the Chinese state-owned dam builder Sinohydro is building the Patuca III hydropower plant at a cost of 350 million dollars.

And Honduran President Porfirio Lobo met in September with executives of the China Development Bank to explore further investment in energy and communications.

But China’s presence is much more ambitious in Nicaragua, where President Daniel Ortega signed a memorandum of understanding in September with the recently created Hong Kong-based HK Nicaragua Canal Development Investment Co to finance and build a canal linking the Caribbean Sea and the Pacific Ocean – a dream long cherished by Managua.

According to Nicaragua’s estimates, the canal will cost 30 billion dollars, and will take 10 years to build. HK Nicaragua, headed by Chinese telecom mogul Wang Jing who is chairman of the Xinwei Telecom Enterprise Group, is to build a waterway that will serve larger ships than the Panama Canal, as well as a “dry canal” railroad for freight.

It will also construct a deep-water port at Monkey Point, on the Caribbean, and upgrade Corinto, the country’s main Pacific Ocean port.

Managua is also negotiating with the China Great Wall Industry Corporation (CGWIC) for the development and purchase of Nicasat-1, a 300-million-dollar third-generation satellite that will offer modern telecom, internet and digital TV services to Nicaragua and other countries in the sub-region as of 2016.

An agreement for that could be reached before the end of the year in Beijing between the Instituto Nicaragüense de Telecomunicaciones and the CGWIC, which has manufactured satellites for several countries in Latin America, Africa and Asia.

In El Salvador, Costa Rica and Guatemala, China has invested in different industries, including solar energy, oil and telecoms, through companies such as Huawei, Suzhou Guoxin Group and the China National Petroleum Corporation.

Garza said that despite the positive economic effects of this investment flow, it was necessary to monitor “what conditions it takes place in – whether labour rights and environmental standards are respected, because that is the area where negative impacts could be seen.”

In Honduras, for example, the non-governmental Patuca Association denounced irregularities in the environmental permit granted to the Patuca III dam construction project by the Secretariat of Natural Resources and the Environment in 2011.

But Central America does not have competitive conditions to sell its products to China. The enormous difference in population size – 42 million people in this entire sub-region against 1.3 billion in China – is just the most obvious aspect.

Most of what Central America produces is in agriculture. “But it is not cost-effective for China to buy beans or fruit here because of the distances and costs involved,” given that volumes are relatively small, Garza pointed out.

Nor has Central America managed to establish a customs union, which would bring a single tariff and common trade, customs and sanitary regulations and laws, facilitating foreign trade and competitiveness, according to the Secretariat for Central American Economic Integration (SIECA).

And although Central America’s sales to China have increased, the trade balance is still heavily skewed in favour of China.

Five of the sub-region’s seven countries – Costa Rica, El Salvador, Guatemala, Honduras and Nicaragua – sold 196 million dollars in goods to China in 2004. The total went up to 220 million dollars from January to May 2012, according to SIECA figures.

But imports from China by those five countries amounted to nearly 1.44 billion dollars in that same period.

But the benefits to the region “are not as obvious as the benefits seen by Chile, which is the world’s largest producer of copper, with China its biggest buyer.”

Because of the distance and cost of transport, it is not convenient for China to buy commodities from Central America because “the cost would be too high,” De León said.

In his view, the region should focus on the much closer U.S. market.

“We have to look more towards the United States,” he said. “We have a big market one and a half hours away by plane; we also have Mexico and Colombia, with which we have free trade agreements.”

On the other hand, China can benefit the region with investment, because of Central America’s “big needs for energy, for which Guatemala, for example, does not have the necessary capital,” he added.

Central America is also constrained because it has chosen diplomatic relations with Taiwan over mainland China.

But in Costa Rica, the only country in Central America that has official ties with Beijing, things don’t look much different.

In agribusiness, “we’re talking about coffee, sugar and one or two other agricultural products,” Gilbert Ramírez, a member of a farming cooperative, told IPS. In Costa Rica, the establishment of formal relations with China in 2007 “has not had a big impact on trade.”

Nor has the free trade agreement signed by San José and Beijing in 2010.

“We have talked to Chinese companies about selling coffee and sugar, and about microcredit or credit, to consolidate our business model through Costa Rica’s export promotion agency. But even though some time has passed, we haven’t reached an agreement on any specific project,” Ramírez said.

He also said the U.S. market is still the most attractive because “it is closer, and it understands us better,” he said, referring to cultural barriers between Central America and China.

But Central America continues to seek trade opportunities in China.

Pedro Barnoya, a businessman with the China-Guatemala Chamber of Cooperation and Trade, told IPS that on Oct. 19 a trade office opened in Shanghai, China’s financial and commercial hub and the world’s largest cargo port, “to look for buyers for our products.”

He also said “we are working with the China Council for the Promotion of International Trade and with private institutions, to create a permanent committee for negotiations with this region.”

In addition, a Guatemalan delegation was at the sixth China-Latin America and Caribbean Business Summit, held Oct. 17-18 in Hangzhou, 180 kilometres from Shanghai in eastern China.

Barnoya said “the most important thing is to make headway in Asia, because that is where the purchasing power is.”