Small and Large Steps towards Equality for Gays in Cuba 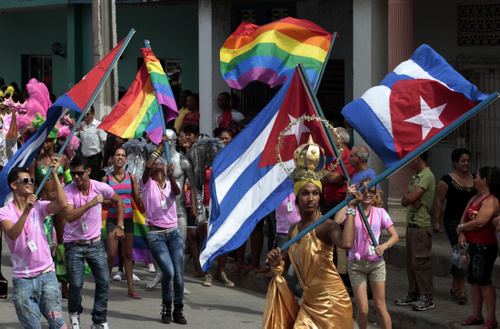 CIEGO DE ÁVILA, Cuba , May 20 2013 (IPS) - The lesbian, gay, bisexual, and transgender community in Cuba has won advances on issues like the change of name of pre-operative transgender persons, while they continue to fight for the right to same-sex civil unions.

For the first time since 1997, a transsexual woman who had not undergone sex-change surgery was issued a photo ID card this year reflecting her chosen name and gender identity, Manuel Vázquez, a lawyer with the National Centre for Sex Education (CENESEX), a government-funded body, told IPS.

“We will continue supporting efforts to attain name changes in other cases, and we hope it will become the norm,” said Vázquez, who is head of the legal services unit in CENESEX, which reports that the family and the workplace are the spheres where the rights of LGBT persons are violated the most.

Up to now, the photo on the national ID card of trans women and men has had to reflect their biological sex.

In 1997, CENESEX managed to reach agreements with the ministries of the interior and justice to change the names and photos on the ID cards of 13 transgender people who had not undergone sex-reassignment surgery, although other civil registry documents, such as their birth certificates, were not modified. But that had not happened again until now.

Transgender people who have undergone sex-change surgery, which is provided free of charge in Cuba since 2008, are allowed to modify their ID cards. In Cuba, 19 people – two of them female-to-male transgender persons – have had sex-reassignment surgery so far, according to CENESEX.

“Now a trans person who has not had surgery is free to seek and win a name change, thanks to this precedent,” Vázquez said.

Speaking to IPS during the month-long events surrounding the International Day Against Homophobia, celebrated May 17, Adela Hernández, the only transgender member of a municipal assembly in Cuba, said she had started the process of applying for a name change on her ID card.

Hernández, a nurse and now a municipal assembly member in the city of Caibarién in the central province of Villa Clara, had to register as a candidate in the October-November 2012 municipal elections under the name José Agustín Hernández and with a photo that looks very different from the woman who won a majority of votes in her district.

Hernández is one of the special guests on this year’s agenda of educational, cultural and – for the first time – sports activities organised by CENESEX, which has led a month of anti-homophobia events every year since 2008.

On this occasion, the central activities took place May 14-17 in the city of Ciego de Ávila, 434 km east of Havana, ending with a festive march down the central avenue Libertad, with the demonstrators waving rainbow and Cuban flags and dancing in a conga line.

Mariela *, a 36-year-old mother, came to watch the conga line with her nine-year-old baby. “I haven’t taken part (in the activities), but I’m not against it,” she told IPS. “These events help families learn about sexual diversity and to respect it more, and help children and young people grow up better.”

But other people are still opposed to the campaign for respect for free sexual orientation and gender identity, which CENESEX carries out all year long, culminating in the May schedule of events, dedicated this year to families.

CENESEX director Mariela Castro said “the hardest thing is to change people’s mentalities,” in a country that is still heavily machista and homophobic. In fact, until the 1990s, “ostentatious public displays of homosexuality” were illegal.

Since 2012, the LGBT community and CENESEX have stepped up their activism demanding recognition of sexual rights as human rights in this country, which has no specific law against discrimination on the grounds of sexual orientation and gender identity.

The Cuban parliament has not yet debated the bill for a new “family code”, sponsored in 2008 by the non-governmental Federation of Cuban Women and other institutions. Among other things, the bill, aimed at updating the family code in effect since 1975, would recognise same-sex civil unions.

In Latin America, same-sex marriage is legal only in Argentina and Uruguay, as well as Mexico City and three states in Mexico. In Brazil, meanwhile, civil unions that confer nearly the same rights as marriage are legal, and on May 14, the National Council of Justice ordered civil registries to allow same-sex couples who apply for a marriage license to marry.

Vázquez called for a law on civil unions in Cuba, and said he supported the creation of a law on gender identity, as advocated by legal experts and activists.

But until such legislation is approved, the 26-year-old lawyer’s strategy is to train attorneys and judges on how to take advantage of existing laws in cases of violations of LGBT rights

“People also have to be brave, and report these crimes,” he said.

He mentioned the first workshop on the question of LGBT rights for lawyers and judges, held in the eastern city of Santiago de Cuba. CENESEX also plans to expand its legal services to other parts of the country.

“There is no law on the rights of homosexuals. There is only very vague language about it,” said Raquel Fernández of the Red de Lesbianas Atenea, a network of lesbians based in Ciego de Ávila. Domestic violence and limited access to housing or jobs due to homophobia are among the limitations that lesbians suffer the most, she told IPS.

*The source asked that her last name not be used.