HAVANA, Nov 11 2011 (IPS) - Communist Party militant, gay rights activist, journalist and blogger Francisco Rodríguez has triggered an online debate in Cuba by calling for sexual diversity to be identified in the next census, due in September 2012. 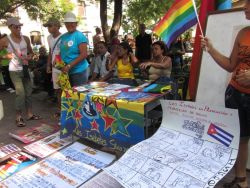 Las Isabelas, the first group of lesbian and bisexual women founded in Cuba, display their work in a central square in Santiago. Credit: Cuba Archive/IPS

Better known by the name of his blog, Paquito el de Cuba, Rodríguez has urged the national statistics office, ONEI, to follow the lead of other countries that have begun to identify same-sex couples and families in the 2010 round of global censuses approved by the United Nations.

“Gay, lesbian, bisexual and transgender (GLBT) people must demand that our families are counted in the census – the largest piece of social research conducted by any given country – notwithstanding the fact that our laws still do not recognise any form of legal union for same-sex couples,” he posted on his blog Monday Nov. 7.

If this happens, Cuba would join countries like Argentina, Australia, Brazil, Chile, Costa Rica, Italy, the United States and Venezuela which, in their separate ways, have incorporated questions related to sexual diversity in their national censuses.

“Those who wish to be recognised as the real families they are, including the possibility that these couples may be raising the biological children of one or both partners, should be given the opportunity to do so,” Rodríguez told IPS in an e-mail. The journalist acknowledged that the point of such a decision would not be to assess the number of same-sex couples, which would be under-reported because of the invisibility that “surrounds these couples as a result of cultural homophobia,” as well as other problems facing people living together, such as the housing shortage. However, he said, “there are many family models that are not socially recognised, that the census could help to count and describe,” to raise awareness about sexual diversity and to contribute key information when political and legislative decisions are made that affect these population groups.

“Paquito’s” latest post began to circulate immediately through social networks like Facebook, and was forwarded to e-mail contact lists and through personal communications on the island by people defending sexual rights as human rights.

It also provoked reactions from people whose outlook remains influenced by the “machista” culture, and who regard heterosexuality as the only acceptable option. In his blog post, Rodríguez said he had access to a letter from Mariela Castro, head of the state National Sex Education Centre (CENESEX), asking ONEI to consider including questions in the census to help identify the different kinds of families.

Earlier, Malú Cano of CENESEX’s Red Trans, a network of transvestite and transgender people, had raised the need to include gender identity in the country’s statistics. “What is nameless does not exist. And we do exist,” said Cano at the Second National Meeting of Transgender Promoters of Sexual Health in mid 2011.

One argument against the proposal is that the pilot trial for the next census was already held last September, to test the methodology that will be used by some 69,000 census takers, mostly volunteer students and teachers in technical and university education.

Rather than delay implementation of the proposal until the next census a decade away, a national survey to gain a broader specific view of sexual minorities could be carried out, but this would require additional resources and political will.

In any case, the proposal by CENESEX and activists like Rodríguez rests on the draft document for discussion at the January 2012 national conference of the governing Cuban Communist Party, which affirms the need to overcome prejudice and discrimination on the grounds of gender and sexual orientation.

“It makes sense to me that if a country wants to know about the social and demographic features of its population, it should take measures to collect reliable statistics. In this case, same-sex couples are a feature just like any other, for instance the number of heterosexual couples living together,” Rogelio Manuel Díaz told IPS.

Díaz, a nuclear physicist and the author of the blog Bubusopia, holds the view that this course of action would allow the 2012 census to “reflect reality, rather than an imaginary picture that would inevitably ignore, exclude and certainly discriminate against part of the population.”

According to Rodríguez, who writes for the trade union weekly Trabajadores, if same-sex couples and families were included in the census, it would be an important tool to persuade parliament to approve a bill recognising equal rights for heterosexual and homosexual couples.

It would also be a key step towards enacting a Gender Identity Law with the aim of guaranteeing full social inclusion for transgender persons.

Yasmín Silvia Portales, a feminist and supporter of the rights of people with different sexual orientations and gender identities, told IPS that “one of the excuses used to justify denying GLBT groups their full rights, and failing to admit that they are victims of discrimination, is that there are so few of us.

“The census is a good opportunity to explode this myth. GLBT people are out there, looking after children and elderly people, living together, getting divorced, studying or working or being supported by our partners,” said Portales, who writes the blog En 2310 y 8225.