Socialists Could Turn to Environmentalist after Candidate’s Death 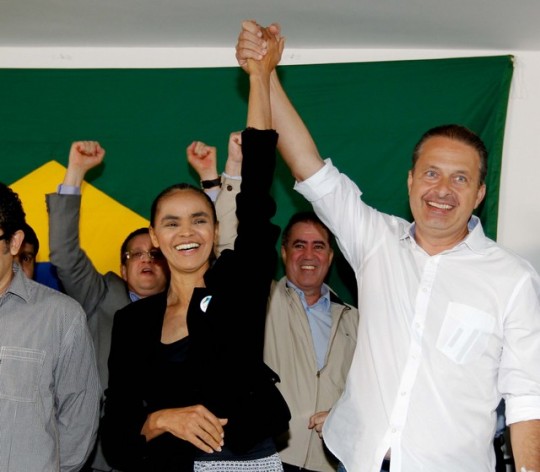 RIO DE JANEIRO, Aug 16 2014 (IPS) - The death of socialist presidential candidate Eduardo Campos opens up an unexpected opportunity for environmental leader Marina Silva to return with renewed strength to the struggle to govern Brazil, offering a “third way” in a highly polarised campaign.

Silva, who was environment minister from 2003 to 2008, won 19.6 million votes in the 2010 presidential elections – 19.3 percent of the total – and is seen by many as someone who can breathe new life into the Brazilian political scene.

The winding road, littered with tragedy, that led to her nomination as vice presidential candidate on Campos’ ticket could thrust her back to the forefront, with a stronger chance of winning.

She has preserved a large part of the popular support she gained in 2010. In addition, opinion polls show that she was the political leader who benefited the most from the mass protests that shook Brazil’s big cities in June and July 2013, which rejected the political class as a whole.

The national commotion caused by the death of Campos in a plane crash on Aug. 13 could also give a fresh impulse to a candidacy aimed at breaking with the two-party system.

The frontrunners in the polls for the Oct. 5 elections are President Dilma Rousseff of the Workers’ Party (PT) and Aecio Neves of the Brazilian Social Democracy Party (PSDB). The PT has governed Brazil since 2003, and the PSDB did so from 1995 to 2002.

Marina Silva’s political career began in the small northwestern Amazon jungle state of Acre, where she was born in 1958. She didn’t learn to read and write until the age of 16, after she left the rainforest to seek healthcare, as she was suffering from hepatitis, malaria and leishmaniosis.

Her close work with rubber-tapper and activist Chico Mendes, who organised his fellow workers in Acre to fight for their rights and became a martyr for the Amazon when he was killed in 1988, was the driver of her first electoral triumphs.

She was environment minister until she resigned in 2008 over policy disagreements with Lula, who she criticised for pursuing “material growth at any cost,” at the expense of the poor and the environment.

A year later she left the PT and joined the small Green Party (PV) to run in the 2010 presidential elections, which were won by Rousseff, Lula’s former energy minister and chief of staff. Silva came in third, but with an unexpectedly strong showing.

She then left the PV as well, over disagreements with its reform proposals, and tried to create a new political grouping, the Sustainability Network. But the electoral court ruled that it had insufficient signatures to qualify.

To avoid being left out of the race, Silva joined the Brazilian Socialist Party (PSB), led by Campos, and became his vice-presidential running-mate.

After Campos’ death, she would seem to be his natural replacement. The PSB has until Aug. 23 to name its new candidate.

If the PSB does not choose Silva, it would be contributing to the two-party system that has reigned for 20 years, and would lose standing in the other levels of power, such as state legislatures and governments. A socialist legislator acknowledged that Campos is “irreplaceable.”

The dilemma for the PSB is that accepting Silva as its candidate would be another kind of suicide, because of the loss of identity it would entail for the party. The environmentalist has numerous discrepancies with the party’s policies.

The PSB, which named the ministers of science and technology during Lula’s two terms, is in favour of nuclear energy and transgenic crops, which are rejected by Silva and other environmentalists.

Campos was one of those ministers in 2004-2005, and his popularity grew when he served as governor of the state of Pernambuco from 2006 to early 2014, thanks to the swift economic growth and industrial development he led in his state, which is in the Northeast, Brazil’s poorest region.

Megaprojects like the Suape Port industrial complex, the diversion of the São Francisco River to bring water to the semiarid Northeast, and the Transnordestina railway were decisive for Pernambuco to have the highest economic growth of any Brazilian state in the last few years.

But environmentalists are opposed to many aspects of these megaprojects, which form part of a development-oriented policy focus that runs counter in many ways to the sustainability touted by Silva’s Network.

The projects were launched or given a new impulse in the last decade by Lula, for whom Campos was an important and loyal ally. His PSB only broke with Rousseff’s PT government last year.

Campos, with popularity ratings of more than 70 percent in Pernambuco, presented himself as an alternative to the PSDB social democrats and the PT labourists. But his criticism was not aimed at the Lula administration; it was strictly reserved for the government of Rousseff.

That distinction could have been based on electoral calculations, because Lula remains extremely popular. But it could have also been due to affinity with the former president. Campos was the political heir to Miguel Arraes, his grandfather, a legendary leader of the Brazilian left who governed Pernambuco for three terms. But he was also a disciple of Lula.

Like Lula, he was a master of dialogue, of building alliances even among disparate groups, forging relations with both business leaders and poor communities, and responding to the forces of the market while introducing strong social policies.

Rousseff, on the other hand, lost support among the business community due to her economic policies.

Campos had to redouble his efforts to win over landowners and ranchers, because of the rejection by those sectors of his running-mate, whose environmentalism is seen as an obstacle to the expansion of agribusiness.

Despite their contradictions, the union of Campos and Silva strengthened the so-called “third way” in Brazil’s elections.

Campos’ death could actually give Silva a boost in the elections, since she is already starting out with a broader electoral base, and will benefit from the fact that many Brazilians are fed up with the way politics is done in this country.

In July, according to the latest poll by the Data Folha Institute, 36 percent of respondents said they would vote for Rousseff, 20 percent for the PSDB’s Neves, and eight percent for Campos.

But analysts are now pointing to two weak points for Silva. One is that she alienates productive sectors with her ecological discourse, and as a consequence loses campaign donations. Another is her membership of the Pentecostal Assemblies of God, which draws her support from the growing evangelical flock but distances the Catholic majority.

In any case, analysts don’t rule out the possibility of a second round between two women who were both former ministers of Lula. But the question is to what extent the PSB’s leaders are prepared to renounce their ideals.