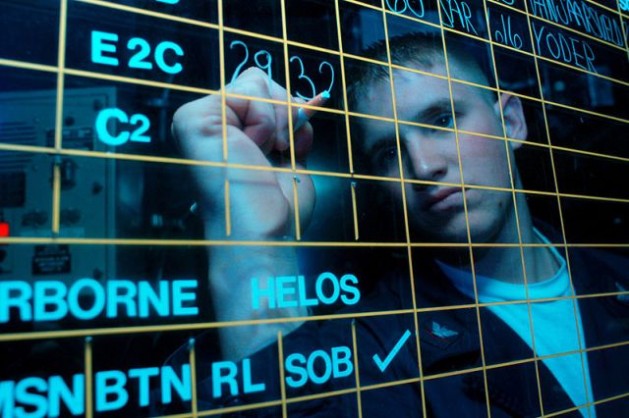 Navy Petty Officer 3rd Class Jeoffrey Keever is bathed in blue light as he writes the status of each aircraft on the status board in the Carrier Air Traffic Controller Center aboard the USS John F Kennedy (CV 67) during flight operations on April 15, 2005. Credit: public domain

WASHINGTON, Sep 15 2014 (IPS) - Despite elite concerns about growing “isolationism” in the U.S. electorate, nearly six in 10 citizens believe Washington should “take an active part in world affairs,” according to the latest in a biennial series of major surveys of U.S. foreign-policy attitudes.

Nonetheless, the number of citizens who believe that the U.S. should “stay out of world affairs” is clearly on the rise, according to the survey, which was conducted in May by the Chicago Council on Global Affairs and released here Monday.

It’s clear that Americans are fatigued by a decade of war, but describing them as isolationist is misleading." -- Chicago Council President Ivo Daalder

Forty-one percent – the highest percentage since World War II — of the more than 2,000 adults polled chose the “stay-out” option, including 40 percent of self-identified Republicans and 48 percent of independents.

“For the first time ever, Republicans are more likely than Democrats to say the U.S. should stay out of world affairs,” said Dina Smeltz, the Council’s chief pollster and co-author of an accompanying report, “Foreign Policy in the Age of Retrenchment”. She noted that the proportion of Republicans who say they want the U.S. to stay out of world affairs has nearly doubled since 2006.

Nonetheless, her co-author, Council president Ivo Daalder, insisted that the public was not turning away from global engagement. “It’s clear that Americans are fatigued by a decade of war, but describing them as isolationist is misleading,” he said.

“They understand that we live in a dangerous world and that our safety and security will at times require a resort to arms. When that clearly is the case, Americans will support using force,” according to Daalder, who served U.S. ambassador to NATO during President Barack Obama’s first term.

Indeed, the survey suggested the public accords a high priority to military power.

Nearly two-thirds of respondents (65 percent) said they believed current defence spending – which makes up almost 40 percent of the world’s total military expenditures – should remain the same or be increased, and nearly six in 10 (71 percent) said they want to maintain or increase the number of as many long-term U.S. bases overseas as there are now, the highest level ever recorded since the Council first asked the question in 1974.

More than half (52 percent) said “maintaining U.S. superior military power” was a “very important” foreign policy goal – lower than the 68 percent who took that position in 2002, but on a par with the findings of the mid-1990’s.

In addition, 69 percent said they would favour military action, including the use of U.S. troops, to prevent Iran from obtaining nuclear weapons, although support for military engagement was considerably less strong (around 45 percent) for other specific cases, such as defending Israel or South Korea against attack or even the Baltic states – despite their NATO membership — against a Russian invasion.

In other findings, the Council’s survey, which has long been considered among the most authoritative on U.S. foreign policy attitudes, found that, by a margin of more than three to one (77 to 23 percent), respondents believe that economic power is more important than military power; and that public support for economic globalisation – particularly among Democrats – has reached a record high.

It also found that that about four in 10 respondents believe China poses a “critical threat” to the U.S. That was down substantially from the mid-50-percent range that prevailed during the 1990s until 9/11 Al Qaeda attacks on New York and the Pentagon.

At the same time, anti-Russian sentiment has returned to Cold-War levels, according to Daalder, who noted the poll was conducted when Russian actions against Crimea dominated the headlines.

The new survey’s release comes amidst renewed concerns here over the threat posed by Islamist extremism, as represented by the Islamic State of Iraq and Syria (ISIS) whose sweep from its stronghold in eastern Syria into central and northern Iraq earlier this summer triggered the first direct intervention by U.S. military forces in Iraq since 2011.

Several major polls released over the last two weeks – and especially following the video-taped beheadings by ISIS of two U.S. reporters — have shown strong public support for U.S. air strikes against ISIS, particularly among Republicans who, as the Council’s survey demonstrated, had previously appeared increasingly divided between its dominant interventionist wing and an ascendant libertarian faction led by Kentucky Sen. Ron Paul.

But the current rallying behind military action may be short-lived, according to Daalder. “It would be a mistake to think that the current public mood will last forever,” he cautioned. “That support [for military action] is highly conditional … on success.”

Nonetheless, the Council’s survey found strong support for air strikes against alleged terrorists already in May when respondents were interviewed.

The notion that the public has become increasingly isolationist has been stoked by a series of surveys over the past year, notably a Pew Research Center poll from last year that, for the first time, found a majority (52 percent) of respondents who agreed with the proposition that “the U.S. should mind its own business internationally and let other countries get along the best then can on their own.”

But that finding was not surprising to Steven Kull, long-time director of the University of Maryland’s Program on International Policy Attitudes (PIPA), who sees it as an expression of public frustration with a “leadership [that] is more invested in American [global dominance] than most Americans are,” especially in the wake of Washington’s experience in the wars in Iraq and Afghanistan.

It may also help explain the sharp rise in the percentage of Republicans who now believe the U.S. should “stay out of world affairs.”

In 2007, 85 percent and 73 percent of Republicans said the wars in Afghanistan and Iraq, respectively, were worth fighting. Seven years later, the respective percentages have fallen to 34 percent and 40 percent. Independents and Democrats, by contrast, have been consistently more sceptical about both wars.

The Council poll also found a more general convergence in foreign-policy views between members of the two parties, particularly with respect to their approaches to China, Iran, and Syria, although Republicans tended to be more hawkish on the use of force, while Democrats were more likely to favour more U.S. support for the U.N. and peacekeeping activities.

The sharpest partisan differences, on the other hand, were on immigration and U.S. policy in the Middle East, with Republicans consistently showing more support for Israel.

“Helping to bring a democratic form of government to other nations” was the least favoured; only 17 percent of respondents cited that as a “very important goal.” That was half the level recorded in 2002 — after Washington succeeded in ousting the Taliban in Afghanistan and just before its invasion of Iraq.

Asked what circumstances might justify using U.S. troops abroad, 71 percent of respondents cited “to deal with humanitarian crises” and “to stop a government from committing genocide and killing large numbers of its own people.” Sixty-nine percent cited “to stop Iran from obtaining nuclear weapons.” Fifty-four percent cited “to ensure the oil supply.”