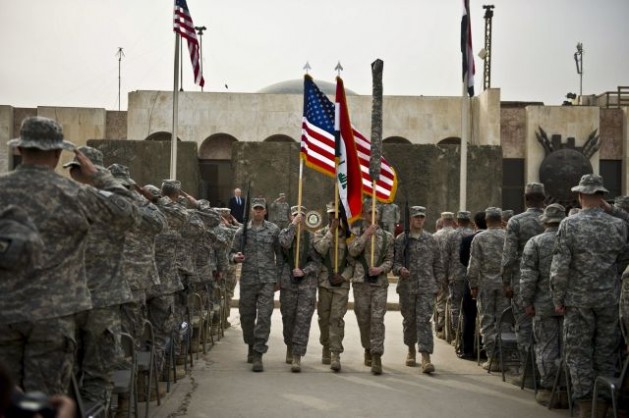 The colours are retired during a ceremony marking the end of the U.S. mission in Iraq in Baghdad on Dec. 15, 2011. Credit: U.S. Defence Department photo by Erin A. Kirk-Cuomo.

WASHINGTON, Sep 10 2012 (IPS) - Disillusioned by wars in Iraq and Afghanistan, the U.S. public is becoming increasingly comfortable with a more modest and less militarised global role for the nation, according to the latest in a biennial series of major surveys.

That attitude is particularly pronounced in the so-called Millennial Generation, citizens between the ages of 18 and 29, according to the poll. They are generally much less worried about international terrorism, immigration, and the rise of China and are far less supportive of an activist U.S. approach to foreign affairs than older groups, it found.

Political independents, who will likely play a decisive role in the outcome of November’s presidential election, also tend more than either Republicans or Democrats to oppose interventionist policies in world affairs, according to the survey, which was released at the Wilson Center for International Scholars here Monday by the Chicago Council on Global Affairs (CCGA).

The survey results suggest that more aggressive and militaristic policies adopted by Republicans at their convention last month may be out of step with both independents and younger voters.

“If you read the whole report,” noted Daniel Drezner, an international relations professor who blogs at foreignpolicy.com, “what’s striking is how much the majority view on foreign policy jibes with what the Obama administration has been doing in the world: military retrenchment from the Middle East, a reliance on diplomacy and sanctions to deal with rogue states, a refocusing on East Asia, and prudent cuts in defence spending.”

For the first time since the Council posed the question in 1994, a majority of its nearly 1,900 adult respondents said they believe that Asia is more important to the United States than Europe.

Reflecting perhaps the so-called “pivot” by the administration of President Barack Obama from the Middle East to Asia, 52 percent of respondents said Asia was more important, a 10-percent increase over the Council’s 2010 survey result. The Pew Research Center found a similar change in its own survey earlier this year.

The survey, which was conducted in late May and early June, also found strong resistance by the public to becoming more deeply involved – especially militarily – in the Middle East, despite the perception by seven in 10 respondents that the region is more threatening to U.S. security than any other.

For the first time since 9/11, majorities said they opposed the retention or establishment of long-term U.S. military bases in Iraq or Afghanistan.

At the same time, 70 percent of respondents said they opposed a unilateral U.S. strike on Iran’s nuclear facilities; and almost as many (59 percent) said the U.S. should not ally itself militarily with Israel if the Jewish state attacks Iran.

The survey, which was released on the eve of the 11th anniversary of the 9/11 attacks on New York City and Pentagon, suggested that the U.S. wars in Iraq and Afghanistan, combined with the continuing hardships of the 2008 global financial crisis, have soured much of the public on foreign intervention, especially military intervention.

“Ten years after 9/11, we see that Americans are in the process of recalibrating their views on international engagement and searching for less costly ways to project positive U.S. influence and protect American interests around the world,” said Marshall Bouton, CCFR’s long-time president.

“Now, with a strong sense that the wars have over-stretched our military and strained our economic resources, they prefer to avoid the use of military force if at all possible,” he noted.

Indeed, the survey found that a record 67 percent of the public now believes the war in Iraq was “not worth it”, while seven of 10 respondents agreed that “the experience of the Iraq war should make nations more cautious about using military force.”

Sixty-nine percent said the war in Afghanistan either made “no difference” to U.S. security (51 percent) or that it made the country “less safe” (18 percent).

The degree of disillusion with foreign affairs in light of the past decade was perhaps most starkly illustrated by the answers to the binary question of whether respondents thought it best for the U.S. to “take an active part in world affairs” or “stay out of world affairs”.

Led by the Millenials (52 percent), 38 percent of all respondents opted for the latter – the highest percentage since just after World War II and seven points higher than in 2010, according to the Council’s analysis. A majority of 61 percent said Washington should take an “active part” – the smallest majority since 1998.

Nearly eight in 10 respondents (78 percent) said they believe the U.S. is playing the role of world policeman more than it should – a figure that has been constant since 2004, a year after the Iraq invasion.

“While they see leadership as desirable,” according to the Council analysis, “Americans clearly reject the role of the United States as a hyperpower and want to take a more cooperative stance.”

Indeed 56 percent now agree with the proposition that Washington should be “more willing to make decisions within the United Nations” even if such decisions are not its first choice. That is a marked increase from a historic low of 50 percent in 2010.

Most respondents said they were not concerned about the growing influence of emerging nations in Asia and elsewhere. Asked for their reaction to increased foreign policy independence of countries like Turkey and Brazil, nearly seven in 10 respondents (69 percent) agreed that it was “mostly good” because of their reduced reliance on the U.S. rather than that it was “mostly bad because then they are likely to do things the U.S. does not support”.

The survey found persistent support for a large military – 53 percent said they believed “maintaining superior military power” is a “very important” foreign policy goal. But that was down from 67 percent in 2002, shortly after 9/11.

And while Republicans continue to attack Obama for “leading from behind” during last year’s intervention in Libya, Bouton said his survey results found that the public was quite comfortable with the low-key role.

Republican politicans have also mocked Obama for offering to negotiate directly with hostile states. But more than two-thirds of respondents said Washington should be ready to hold talks with the leaders of Cuba (73 percent), North Korea (69 percent) and Iran (67 percent).

The survey found that self-described Republicans generally see the world as more hostile and threatening than Democrats.

The most striking differences between members of the two parties were found over immigration, climate change, and the Middle East, particularly on Israel-related issues, with Republicans siding much more strongly with Israel on the Israeli-Palestinian conflict and in the event of an Israeli attack on Iran.