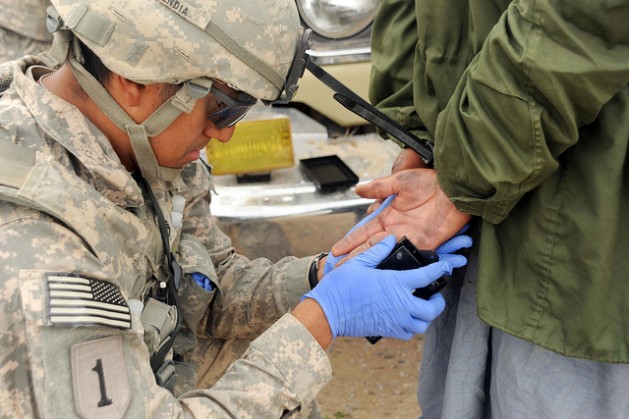 A day after the New York Times reported on U.S. efforts to transfer its detention operations to the Afghan government in accordance with a Mar. 9 Memorandum of Understanding, the Open Society Foundations (OSF) released a report finding that the agreement and U.S.-retained management and authority over parts of the Detention Facility in Parwan (DFIP) at the Bagram airbase have resulted in an “Afghan internment regime” and “differences in understanding” about who controls the handling of suspects and detainees.

“The United States has been using internment in Afghanistan for many years, where detainees are ‘preventatively detained’ for ‘imperative security reasons’, rather than accused of a crime and tried in a court,” notes the study by the New York-based OSF, which was founded by investor and philanthropist George Soros.

“In order to facilitate the transfer of the detainees interned by the U.S. military, the Afghan government created its own internment regime, closely resembling the U.S. system,” state OSF researchers.

Marvin Weinbaum, who served as an analyst on Afghanistan and Pakistan for the State Department from 1993-2003, told IPS that while “there is a recognition that this transfer of responsibility has to go forward in a responsible way” there is “real doubt as to whether the Afghans have the capacity to effectively incarcerate suspects”.

“One of our concerns is that through legal means people who we consider dangerous will be released… we also don’t want to mix security issues with settling of disagreements among Afghans themselves,” he said.

“We want a change of authority but a continuity of policy,” said Weinbaum.

Weinbaum admitted that in trying to transfer control to the Afghan government, the U.S. may need to simply “adjust to the fact that in the end they are going to have
responsibility and our own unease with how Afghan law may come to bear”.

Cori Crider, the legal director of Reprieve, a prisoners’ rights legal action charity, told IPS that “Bagram prison – often referred to as ‘Guantanamo’s evil twin’ – is a monumental insult to the rule of law.

“It leaves a terrible legacy to the Afghan government of detention without charge and the abuse and torture of prisoners,” she said.

Afghanistan’s national security advisor Rangin Dadfar Spanta told the OSF that “we cannot allow our allies and friends to have a detention center in Afghanistan, this is illegal…through night raids and special operations they cannot and should not take new detainees, they must hand over at that place (of capture) to Afghans,” he said.

“The Mar. 9, 2012, Detentions MOU does not limit the authority of U.S. forces to capture and detain the enemy,” said one official quoted by the OSF.

While the U.S. wants to maintain its ability to handle detainees of interest for the time being, explicitly imposing its authority in this way raises questions over who controls Afghanistan.

“That is a concern here because we recognise that the sovereignty issue is a very sensitive one,” Weinbaum told IPS.

“If we have set up conditions that seem to challenge Afghan sovereignty there will be a reaction. We already had some,” he said.

“The U.S. military wants to keep its foot in the door of Bagram, and they’ve been avoiding Afghan demands for sovereignty in order to do so,” notes Rachel Reid, senior advisor on Afghanistan at the OSF.

“But if Afghanistan truly wants to bring legitimacy to national security detentions, creating their own unlawful internment regime is a bad way to start,” she said.

The Hamid Karzai government has stated that the MOU, which was initiated by Karzai following heated domestic criticism over deadly U.S. night raids, indicates a complete halt of transfers to the U.S. controlled base in Parwan province.

“After Sep. 9, no one will be transferred into the U.S. side of the DFIP,” Aimal Faizi, President Karzai’s spokesperson, told OSF researchers.

The Times report references a recent interview with William K. Lietzau where he states that the U.S. had “insisted” during the negotiation process that “the Karzai administration embrace a system of no-trial detention for wartime prisoners deemed too difficult to prosecute but too dangerous to release”. That agreement was not ratified by Afghan lawmakers.

While the Times states that the Afghan government considers the no-trial system “legal” and suggests that most Afghan officials understand and continue to cooperate with the U.S. position even while President Karzai protests and postures to the contrary, the OSF report includes contradictory assessments from Afghan experts.

According to the head of the Commission on the Constitution, Gul Rahman
Qazi, the Afghan internment regime that is holding some transferred detainees without charge or trial is not “legally sufficient” as a matter of Afghan domestic law.

“This is illegal,” noted Qazi to the OSF. “Even if it were just one person detained like this, it would be illegal.”

The Times report also reveals that the U.S. will “maintain control over dozens of foreign detainees in Afghanistan for the indefinite future” and “continue to hold and screen newly captured Afghans for a time”.

The U.S. is especially unwilling to give up control over Pakistani detainees.

“If we keep these people with us in this current situation and deal with them, this will create more problems for us…Therefore it is better for the Americans to keep them,” Afghan General Ghulam Farouk told the Times.

Crider cites the lack of attention to the rights of non-Afghan prisoners.

“One example is Yunus Rahmatullah, who was detained by UK forces in Iraq in 2004 before being rendered to Afghanistan,” she told IPS.

“Can he expect another eight years of imprisonment without charge or trial, or will the UK government see him home?” she said.