Fred Abrahams is a special adviser at Human Rights Watch and a contributor to Foreign Policy In Focus. 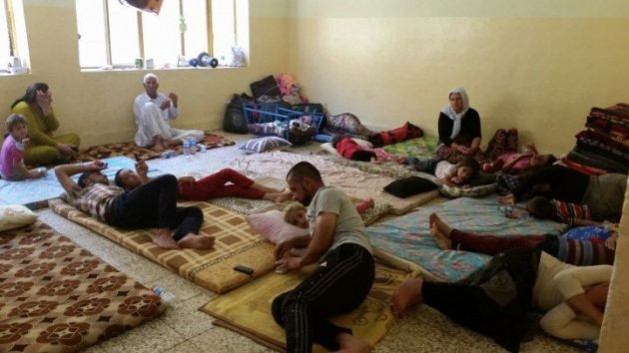 The U.S. can help the Yazidis and their Kurdish hosts by increasing financial support for desperately needed shelters and schools. Credit: Fred Abrahams / Human Rights Watch

ERBIL, Sep 9 2014 (IPS) - Using schools for shelter was a natural. When the Islamic State drove waves of people from the Sinjar area of Iraq in early August, most of them members of the Yazidi minority group, they fled first to the mountains and then to the relative safety of Iraqi Kurdistan. They camped out in whatever unoccupied structures they could find.

Now more than 600 schools are filled with desperate families struggling to come to terms with the trauma of the mass killings, abductions, and sexual violence by the Islamic State that decimated their communities. They sleep in classrooms, hallways, and the courtyards of facilities intended for children’s education.

The impact is double-edged. With no prospect for them to return home soon, these people need better shelter and care for the long term, including education for the tens of thousands of children among them. Yet the children of accommodating host communities also need access to their schools.

The school year under the Kurdish Regional Government (KRG) is due to start on Sep. 10. But hundreds of schools will not be able to open that day.

According to the KRG Education Ministry, 653 schools in the Dohuk governorate, which has borne the brunt of the crisis, are being used to shelter displaced Yazidis and others, with schools playing a similar role in the cities of Sulaimaniya and Erbil. Across Iraq, around 2,000 schools are being used to shelter the displaced, the United Nations says.

The northwestern Duhok governorate, with its 1.3 million residents, has absorbed 520,000 displaced people, according to the U.N. That’s in addition to 220,000 refugees from the conflict in neighboring Syria already in KRG areas. Around the country, 1.8 million people are internally displaced.

The immediate answer to the crisis gripping Duhok schools is to build camps, and that is happening. But it will take months before the 14 planned camps in KRG areas are up and running, and they will only serve half of the displaced. More funds are urgently needed to expedite and expand the work.

The United States and other countries can help the Yazidis and other Iraqis by increasing their financial support for desperately needed humanitarian aid.

Compounding the problem is an ongoing budget dispute between the KRG and Iraq’s central government, which has blocked central government funding for displaced people in the Kurdish region and kept teachers there from getting regularly paid for months. Children should not be held hostage to the political crisis gripping Iraq.

The dispute includes differences in curriculum between the Iraqi central government and the Kurdish-run region. To promote education and reduce tension, the Baghdad authorities and the KRG should rapidly find ways to deliver textbooks and administer exams.

The logistical and political hurdles are daunting. But the children here, both residents and the displaced, need all the help they can get to turn the shelters back to schools.