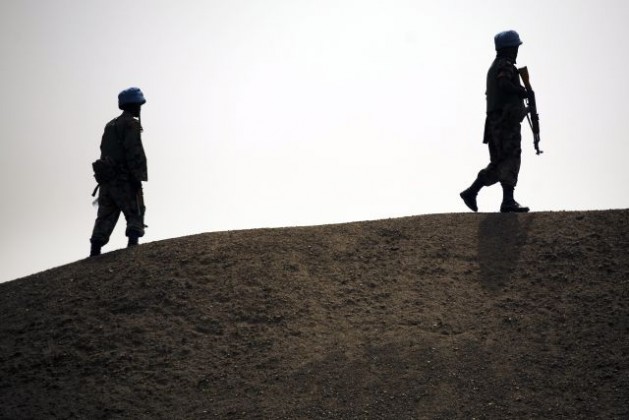 The leaked expert team report, dated Nov. 3, 2013, begins by stating, “Sexual Exploitation and Abuse has been judged the most significant risk to U.N. peacekeeping missions, above and beyond other key risks including protection of civilians.”

Victims of sexual assault may not feel confident to come forward, particularly if “they fear that the system doesn’t work, that justice will never be served and that they may be in a worse situation than if they hadn’t reported.” -- Paula Donovan

AIDS-Free World, which released the report, is concerned it “contains valuable material that differs profoundly from the Secretary-General’s own annual report on progress.”

Some of the key issues highlighted by AIDS-Free World include problems with the way the U.N. collects information about sexual exploitation and abuse by U.N. peacekeepers; delays in action taken which lead to effective impunity for U.N. peacekeeping personnel; and what the expert’s report described as “a culture of extreme caution with respect to the rights of the accused, and little accorded to the rights of the victim.”

In an open letter addressed to “Ambassadors of All United Nations Member States” sent Monday, AIDS-Free World wrote, “We know that the UN has never disseminated the Expert Team’s Report. We therefore suspect that few if any governments are aware that independent experts, commissioned by the Secretary-General, made pointed criticisms about the way sexual violations in UN peacekeeping missions are handled.

“We are releasing the Report today because we believe it contains valuable material that differs profoundly from the Secretary-General’s own annual report on progress. It should be seen by all the Member States of the United Nations.”

IPS spoke with Paula Donovan, co-director of AIDS-Free World, who said that the expert team that compiled the 2013 report had the required expertise to address the complex problem of abuse by U.N. peacekeepers and asked pressing questions.

Donovan explained that by contrast, the secretary-general’s recent report used inadequate and incomplete reporting mechanisms that didn’t account for the complexities of addressing an institutional culture of impunity towards sexual exploitation and abuse.

“Each year the secretary-general is required to report to the General Assembly on how he is doing. Are these special measures for protection against sexual exploitation and sexual abuse working? Are we getting closer to zero [cases]?”

However, the expert team reported that were a number of reasons for underreporting of sexual exploitation and abuse and that “U.N. personnel in all the missions we visited could point to numerous suspected or quite visible cases of SEA that are not being counted or investigated.”

“The U.N. does not know how serious the problem of SEA [sexual exploitation and abuse] is because the official numbers mask what appears to be significant amounts of underreporting of SEA,” the report said.

Donovan said that the secretary-general’s focus on reporting a decrease in the number of allegations was problematic for a number of reasons. “One thing that people who understand these issues know is that when numbers go down, it doesn’t necessarily indicate that incidents have gone down. It may be a lack of confidence in the reporting process.”

Donovan added that experts on sexual violence would advise that, “when you put a programme in place that actually begins to prevent and punish sexual exploitation and abuse, one indicator that your programme is working is that people feel safe enough to come forward.”

She said that U.N. peacekeepers were working “to protect the most vulnerable people on earth.”

For many reasons, therefore, victims of sexual assault may not feel confident to come forward, particularly if “they fear that the system doesn’t work, that justice will never be served and that they may be in a worse situation than if they hadn’t reported.

“If you make it clear to people that you can demonstrate that it is a safer decision to report than to stay silent, that’s an indication that your programme is working,” Donovan siad.

Donovan added that the U.N.’s focus on reporting “allegations” as against actual cases meant that its reporting bears no resemblance to reality.

She also added that the numbers reported by the secretary-general were incomplete as well as inaccurate, because they did not include data from UNICEF, which has its own separate reporting mechanism.

There are hopes that the High-Level Independent Panel on Peace Operations will help find practical solutions to issues of impunity and transparency within U.N. Peace Operations, including those raised in this report.

Noting that the review panel was not entirely independent, given one of it’s members had been simultaneously U.N. under secretary-general in charge of Field Support for the first several months of the panel’s work, Donovan said that she still had hope that the review could address these complex issues.

Donovan said that Aids-Free World has sent a copy of the expert team’s report to panel chair José Ramos-Horta and that “if he chooses to independently take this on and insist that the U.N. take this on than there is the possibility of success.

“Under the leadership of José Ramos-Horta, it is possible that it won’t just be another panel,” she added.

Ramos-Horta shared a link to an article about Sexual Abuse by U.N. Peacekeepers with his more than 30,000 Facebook followers on Mar. 6.

Donovan told IPS that when Aids-Free World originally learned that there had been an expert inquiry, they wrote to the U.N. and asked for a copy of the report.

“We were told that it was not a public document,” she said.

Most governments have quite a clear Freedom of Information policy, which includes ways of categorising classified and unclassified documents. That is not necessarily so for the U.N. so it is unclear why this particular report was not released, Donovan said.

Asked for a response, the Office of the Spokesperson for the U.N. Secretary-General said in a statement, “The proposals and initiatives presented to the General Assembly in A/69/779 reflect an integrated approach aimed at strengthening prevention, enforcement and remedial action in connection with sexual exploitation and abuse by United Nations personnel.

“The report also revisits a number of proposals set out in the seminal 2005 Secretary-General report to the GA ‘A comprehensive strategy to eliminate future sexual exploitation and abuse in the United Nations peacekeeping operations’ which was prepared by a special task force chaired by Prince Zeid Ra’ad Zeid Al-Hussein, then Permanent Representative of the Kingdom of Jordan to the United Nations.

“The report included recommendations for holding courts martial in host countries and establishing a trust Fund for Victims. Prevention, combatting and remediating acts of sexual exploitation and abuse are a top priority for the organization and will continue to be focus of sustained efforts to address the issue.”