Eighty-Three Percent of Lights Have Gone Out in Syria 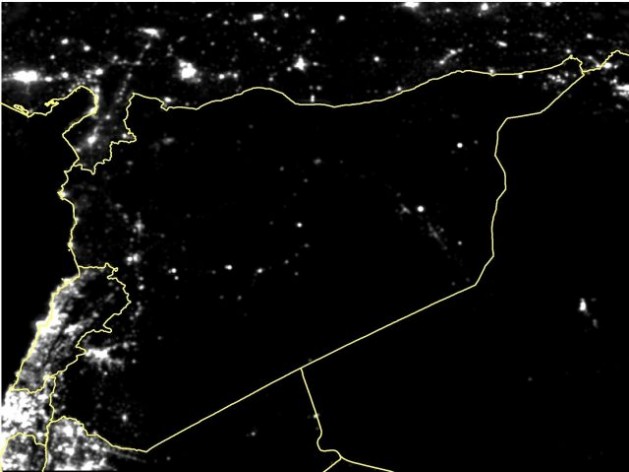 UNITED NATIONS, Mar 11 2015 (IPS) - A single image can be more powerful, more descriptive and more potent than an entire essay – ‘ a picture says a thousand words,’ as the cliché goes.

So it is in Syria, where despite the undoubted millions of words penned about atrocity after atrocity, bombing after bombing, a newly-released set of satellite images spell out the true devastation wrought on the nation.

“People are functioning the same way as in the Middle Ages. Modern technology, which we take for granted, cannot be used. Even the lucky ones with a generator have to ration it." -- Dr. Zaher Sahloul

Since the start of the conflict in 2011, more than four-fifths of lights across Syria have gone out.

With Syria, a coalition of 130 non-governmental organisations, launched the sobering statistic on Thursday. Research by Dr Xi Li, of Wuhan University in China, showed between March 2011 and February 2015, the number of lights visible over Syria has fallen almost 83 percent.

“I have analysed other countries, but Syria is the worst case I’ve ever seen of nighttime lights going out like this,” Li told IPS. “It is very similar to the figures of the Rwandan genocide. Rwanda and Syria are the two most impacted and most suffering countries I’ve seen.”

Li says the astonishing lack of light in the country is due to three factors; the displacement of citizens from towns and cities, the destruction of buildings and their lights, and disruption of electricity supply, all of which have hugely damaging and potentially deadly effects.

“Electricity is one of the basic needs for people, but basic supplies have been cut off. Most people there are living in darkness,” Li said.

Destruction and disruption of power supply is not unfamiliar for Dr. Zaher Sahloul. President of the Syrian American Medical Society (SAMS), Sahloul – a Syrian himself, with family still in the country – and his organisation provide medical care in trauma centres and clinics around the country.

SAMS also provides diesel, to fuel power generators in areas without steady electricity supply. Sahloul said a lack of basic utilities is one of the biggest issues faced by citizens and aid groups looking to assist on the ground, claiming that areas like Ghouta – near Damascus – have been without power for over 860 days.

“Some of the shortages are intentional, by fighting groups. When they circle an area, or start a siege, they cut off the power. Some government controlled areas have electricity a few hours a day, usually after midnight, because of rationing,” he told IPS. “Aleppo and Ghouta have a complete dependence on generators and diesel fuel.”

Sahloul said SAMS provides funding for facilities to purchase diesel fuel, but it is scarce and expensive – up to 12 dollars per gallon, “the highest in the world,” he claims.

“People are functioning the same way as in the Middle Ages. Modern technology, which we take for granted, cannot be used. Even the lucky ones with a generator have to ration it. Many functions have stopped in the cities under siege,” Sahloul said.

“The basic functions of any village, like garbage management, water, bakeries and schools – with no power, how can you do those? It is a formula for disaster.”

Syria has just shivered its way through a harsh winter, with temperatures plunging to -7 degrees Celsius (20 degrees Fahrenheit). Many Syrians battled the cold in tents in refugee camps, or in the shells of destroyed houses, with no way to keep warm. Sahloul’s family was one of those.

“They have been trying to get fuel for months, but have not been able to, so they can’t use the heating in their house,” he said.

“Tens of thousands of displaced people have no heat. There were children dying, freezing to death. Nowadays, nobody can live without electricity.”

Sharif Aly, Advocacy Counsel for Islamic Relief USA, said his group’s recent efforts had also focused on helping Syrians survive a brutal winter without heat, power or even secure shelter. Due to security concerns, Islamic Relief was only able to provide basic blankets and coats in some parts of the country.

“People being displaced have to brave the elements, a very cold winter with snow and ice. There were deaths from freezing,” Aly told IPS. “Our winter work has been to try and provide gas or fuel to families. Hopefully the problems are starting to alleviate with spring, but it has been a big challenge.”

Aly said a lack of electricity, as well as ongoing dangers from gunfire, bombings and other military activity had made providing medical care hugely difficult; but while emergency trauma care for wounds is the most obvious medical emergency, he said psychological and emotional injuries were all but ignored in the region.

“There are huge mental health problems, a lot of psychological impact for these innocent people caught in the conflict,” he said.

“Getting health aid is challenging. We recently started a kidney dialysis service in Lebanon, because due to the situation in Syria and a lack of health services, there is not a lot of opportunity to get good treatment for urgent things like dialysis.”

Sahloul said many members of the medical community are fleeing Syria as the conflict becomes even bloodier. Former U.S. Secretary of State Madeline Albright, addressing a telebriefing on the release of the ‘lights out’ figures, said 2014 was “the bloodiest year yet” of the conflict, bringing the total death toll since 2011 to over 200,000 lives.

“Every physician I know in Syria is thinking about leaving, even in so-called stable areas,” Sahloul said.

“The continuation of violence is adding strain to the medical community. There has been systematic targeting of health facilities by fighting group. There is a flight of doctors and nurses out of Syria.”

A report released Wednesday by Physicians For Human Rights claimed 610 medical staff had been killed in Syria since 2011, with 233 attacks on 183 medical facilities.

The group said the Syrian government “committed the vast majority of these attacks,” responsible for 97 percent of medical personnel killings, including 139 by torture or execution.

Sahloul said the exodus of medical staff has led to the spread of diseases such as typhoid and tuberculosis, parasites including lice and scabies, malnutrition, and chronic diseases going untreated due to a lack of access to healthcare and medication.

March 2015 marks four years since the beginning of the Syrian conflict. Despite a death toll in the hundreds of thousands, 11 million people displaced, and an untold number of wounded, an end to the violence is not in sight.

“People on the ground are not hopeful. There are rumblings in the NGO community that this could be an eight or 10-year conflict,” Aly said. “There is no expectation of a resolution anytime soon.”

Li, drawing another parallel between Syria and the Rwanda, said he hoped the international community would act before the Syrian conflict became as infamous as the 1994 genocide.

“The international community ignored Rwanda, and after, they regretted it. I don’t want people to have any more regrets after this conflict ends,” he said.

“In areas like Aleppo, the situation is as bad as always, or even worse. Nobody is optimistic, and nobody is taking the crisis as seriously as they should be,” he warned.

“They are thinking Syria can be contained. It is not contained. This is the tip of the iceberg. If it continues, the situation in the whole region will explode.”