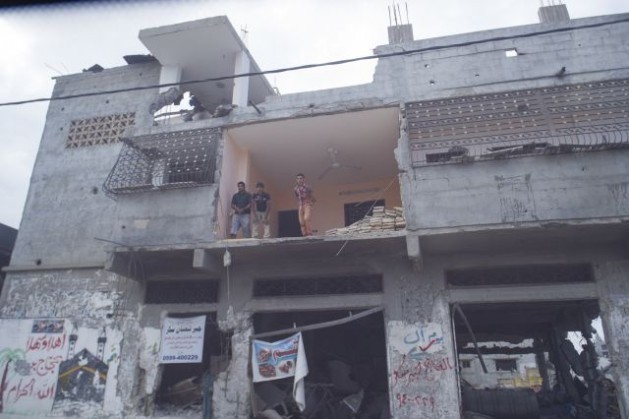 Scenes of the aftermath of the devastating Gaza conflict, which took place during the previous summer. Credit: UN Photo

UNITED NATIONS, Mar 3 2015 (IPS) - Despite all the political hoopla surrounding an international pledging conference in Cairo last October to help rebuild Gaza, the reconstruction of the Israeli-devastated territory is apparently moving at the pace of paralytic snail.

“It is utterly deplorable that the international community is once again failing the people of Gaza when they need it most." -- Catherine Essoyan of Oxfam

“The blockade of Gaza is collective punishment, and donors to Gaza should not just fulfill their pledges but pressure Israel to lift it and Egypt to stop supporting it,” she said.

In several cases, Whitson said, children have died from hypothermia in winter storms due to lack of shelter and heating.

Oxfam International, reaffirming the time frame, said it could take “more than 100 years to complete essential building of homes, schools and health facilities in Gaza — unless the Israeli blockade is lifted.”

Quoting aid agencies on the ground, the London-based charity said Gaza needs more than 800,000 truckloads of construction materials to build homes, schools, health facilities and other infrastructure required after repeated conflicts and years of blockade.

Yet in January, only 579 such trucks entered Gaza. This is even less than the 795 trucks that entered the previous month, Oxfam said, in a statement released here.

Around 100,000 people – more than half of them children – are still living in shelters, temporary accommodation or with extended family after their homes were destroyed. Tens of thousands more families are living in badly damaged homes.

Catherine Essoyan, Oxfam’s regional director, said, “Only an end to the blockade of Gaza will ensure that people can rebuild their lives. Families have been living in homes without roofs, walls or windows for the past six months.”

She said many have just six hours of electricity a day and are without running water. Every day that people are unable to build is putting more lives at risk.

“It is utterly deplorable that the international community is once again failing the people of Gaza when they need it most,” Essoyan said.

In a joint statement titled “We must not fail Gaza”, they said: “As UN agencies and international NGOs operating in Gaza, we are alarmed by the limited progress in rebuilding the lives of those affected and tackling the root causes of the conflict.”

The Israeli-imposed blockade continues, the political process, along with the economy, are paralysed, and living conditions have worsened, the groups warned.

Reconstruction and repairs to the tens of thousands of homes, hospitals, and schools damaged or destroyed in the fighting has been woefully slow. Sporadic rocket fire from Palestinian armed groups has resumed.

Overall, the lack of progress has deepened levels of desperation and frustration among the population, more than two-thirds of whom are Palestinian refugees, they said.

The 30 organisations also included U.N. agencies such as UN Relief and Works Agency (UNRWA), U.N. Women, World Food Programme (WFP), World Health Organisation (WHO), the U.N. Office for the Coordination of Humanitarian Affairs (OCHA) and the Office of the U.N. High Commissioner for Human Rights (UNOHCHR).

When the 54-day conflict between Hamas and Israel ended last August, there were 1,976 Palestinians, mostly civilians, and 459 children who were killed largely by aerial bombings. In contrast, 66 Israelis were killed, including two soldiers.

The hostilities also left about 108,000 people homeless, completely destroyed 26 schools and four primary health centres, and destroyed or damaged 350 businesses and 17,000 hectares of agricultural land, according to a U.N. assessment. Additionally, about 7,000 homes were destroyed and 89,000 damaged.

Cash assistance to families who lost everything has been suspended and other crucial aid is unavailable due to lack of funds. A return to hostilities is inevitable if progress is not made and the root causes of conflict are not addressed.

The aid agencies said Israel, as the occupying power, is the main duty bearer and must comply with its obligations under international law. In particular, it must fully lift the blockade, within the framework of U.N. Security Council Resolution 1860 (2009).

“The fragile ceasefire must be reinforced, and the parties must resume negotiations to achieve a comprehensive settlement of the Israeli-Palestinian issue. All parties must respect international law and those responsible for violations must be brought to justice.”

Also imperative, Egypt needs to open the Rafah Crossing, most urgently for humanitarian cases, and donor pledges must be translated into disbursements.

Under the blockade, Oxfam said, exports of agricultural produce from Gaza have fallen in the last year to just 2.7 percent of the level before the blockade was imposed.

Fishermen are still restricted to an enforced fishing limit of six nautical miles – far short of where most fish are – and farmers are restricted from accessing much of the most fertile farmland.

Gaza continues to be separated from the West Bank, and most people are still prevented from leaving. The border with Egypt has also been shut for most of the past two months, preventing thousands of people from travelling.