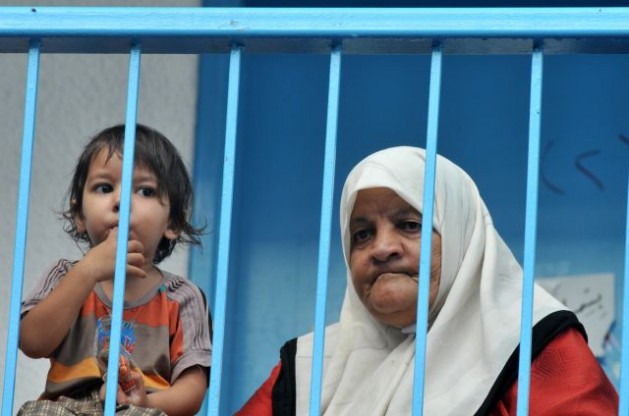 Displaced Palestinians gather at a United Nations school in Beit Lahiya in the northern Gaza Strip, Aug. 26, 2014. Families found refuge after fleeing their homes in an area under heavy aerial bombardment in the besieged Palestinian territory. Credit: UN Photo/Shareef Sarhan

UNITED NATIONS, Oct 13 2014 (IPS) - When the international pledging conference to rebuild a devastated Gaza ended in Cairo over the weekend – the third such conference in less than six years – the lingering question among donors was: is this the last of it or are there more assaults to come?

"Donors who keep footing the bill to rebuild Gaza should insist that Israel lift unjustified restrictions that are worsening a grim humanitarian situation and needlessly punishing civilians." -- Sarah Leah Whitson

The total amount pledged at the Cairo conference was around 5.4 billion dollars.

Sarah Leah Whitson, executive director, Middle East & North Africa Division at Human Rights Watch (HRW), told IPS many of the participants in the Gaza reconstruction have proclaimed their understanding that money is not enough to Israel’s never-ending cycle of death and destruction in Gaza.

“What’s still missing is the international community’s commitment to opening the borders of Gaza so that people there can have a basis of normal life, develop their economy, and take one step away from poverty and handouts,” she added.

Nadia Hijab, executive director of Al-Shabaka: The Palestinian Policy Network, told IPS Ban Ki-moon is right that reconstruction followed by destruction is an exercise in futility, but he appears to feel no responsibility in making sure the destruction doesn’t happen.

“The United Nations was set up to avoid the gross violation of rights that Israel has repeatedly visited upon Gaza – and upon the Palestinian people over nearly seven decades.”

Ban, in particular, is well-placed to hold Israel accountable under many legal instruments, she pointed out.

“But for decades the U.N. secretary-general has never acted until world powers asked him to do so. And world powers only act in their own interests,” she said.

Hijab also said the reconstruction conference on Gaza is an attempt by these same world powers to be seen to be dealing with the aftermath of an Israeli assault that provoked worldwide outrage. But if the “international community” really cared about the Palestinians of Gaza, they would order Israel to lift its blockade without delay, she declared.

“And follow that by cutting back on their trade and military ties with Israel until it quits the occupied Palestinian territory,” said Hijab.

When the 54-day conflict between Hamas and Israel ended last August, there were over 2,000 Palestinians, mostly civilians, and 73 Israelis killed.

The hostilities in July-August significantly worsened a humanitarian crisis in Gaza, according to HRW. They left 108,000 people homeless, completely destroyed 26 schools and four primary health centres, and destroyed or damaged 350 businesses and 17,000 hectares of agricultural land, according to a U.N. assessment.

U.S. Secretary of State John Kerry, who participated in the pledging conference, was constrained to remark, “This is the third time in less than six years that together with the people of Gaza, we have been forced to confront a reconstruction effort.

“Now, I don’t think there’s any person here who wants to come yet again to rebuild Gaza only to think that two years from now or less were going to be back at the same table talking about rebuilding Gaza again because the fundamental issues have not been dealt with,” Kerry declared, taking a passing shot at Israel.

Ban said “whatever we may reconstruct this may not be sustainable if it is not supported by political dialogue. That is why peace talks are the most important. There is no alternative to dialogue and resolving all these underlying issues through political negotiations,” he noted.

He said this must be the last Gaza reconstruction conference.

“The cycle of building and destroying must end. Donors may be fatigued but the people of Gaza are bruised and bloody. Enough is enough,” he added.

Israel’s unwillingness to lift such restrictions will seriously hinder a sustainable recovery after a seven-year blockade and the July-August fighting that damaged much of Gaza.

“The U.N. Security Council should reinforce previous resolutions ignored by Israel calling for the removal of unjustified restrictions,” HRW said.

Meanwhile, Israel’s blockade of Gaza, reinforced by Egypt, has largely prevented the export and import of commercial and agricultural goods, crippling Gaza’s economy, as well as travel for personal, educational, and health reasons, according to HRW.

“Donors who keep footing the bill to rebuild Gaza should insist that Israel lift unjustified restrictions that are worsening a grim humanitarian situation and needlessly punishing civilians,” HRW’s Whitson said.