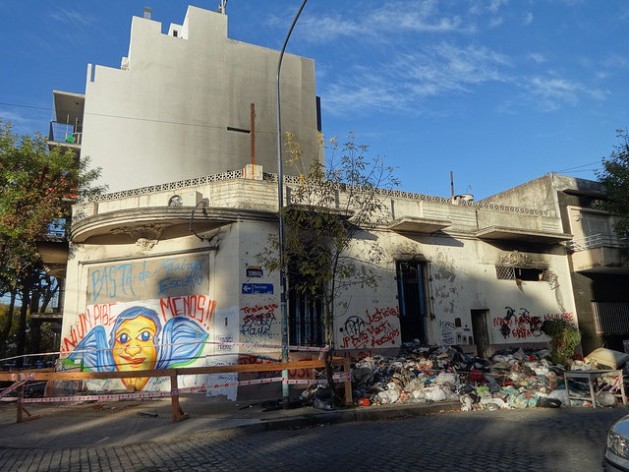 A clandestine textile sweatshop in the Flores neighbourhood of the Argentine capital that suffered two fires: one on Apr. 27 that killed two Bolivian boys, aged seven and 10, and the second on May 7, which gutted the building and was apparently intentionally set to eliminate evidence of illegal activities. Credit: Fabiana Frayssinet/IPS

BUENOS AIRES, May 30 2015 (IPS) - The death of two Bolivian boys in a fire and the mistreatment and sexual abuse of a young Bolivian woman put the problem of slave-like labour conditions in clandestine sweatshops back in the headlines in Argentina.

The state, the textile and fashion industries, and consumers mutually blame each other for the problem.

The two brothers aged seven and 10 died on Apr. 27 in a fire in one of the numerous clandestine garment workshops in Flores, a Buenos Aires neighbourhood, where their parents, immigrants from Bolivia, were living and working.

A few days earlier, Rosa Payro, a 21-year-old from Bolivia, was rescued from another sweatshop on the outskirts of Buenos Aries after nearly three years of being raped, beaten, tortured and held captive by distant relatives she was working for.

These two cases reflect a complex situation, Juan Vásquez, a former sweatshop worker who now forms part of Simbiosis Cultural, a collective of Bolivian immigrants seeking to draw attention to the appalling conditions in the clandestine workshops, told IPS.

“When people talk about slave labour, they think of it as a ‘Bolivian’ thing and they don’t associate it with consumerism, with local working class people, with the connivance of the national and city governments,” said Vásquez. “We are merely the leftovers, the excluded, the exiled.”

According to the Alameda Foundation, there are some 3,000 sweatshops in and around Buenos Aires alone, with an average of 10 employees each. The majority of the roughly 30,000 workers are from Bolivia, South America’s poorest country. But there are also Peruvians, as well as workers from other Argentine provinces.

“They live in the same place where they are exploited, and they work over 16 hours a day,” said Lucas Schaerer, spokesman for the Alameda Foundation, which fights slave and child labour and the trafficking of persons for sexual exploitation. “They are completely under the control of their boss.”

He told IPS that “they’re forced to pay taxes, they eat in the same place they work, in inhumane conditions. Their meals, discounted from their wages, are skimpy, which is why they have a high incidence of tuberculosis. They live in concentration camp-style dormitories with bunkbeds and bathrooms shared by 30, 50, 60 people.”

In Argentina, a country of 41 million people, including 1.8 million foreign nationals, the law on immigration guarantees the right to work, education and healthcare for South American immigrants. But many of these modern-day slaves are undocumented. And according to estimates by non-governmental organisations, 90 percent of them work in agriculture or the textile industry.

“They often traffic them without documents or identification,” said Schaerer, referring to the sweatshop owners, who are sometimes relatives or acquaintances of the trafficking victims.

“Many don’t want to try to legalise their status because they think they’ll be deported,” Alfredo Ayala, the president of the Asociación Civil Federativa Boliviana, told IPS.

Schaerer said that the sweatshops are the last link in the garment industry chain, and that nearly 80 percent of the industry depends on them.

He cited a 2006 internal audit by the Defence Ministry, which found that the army procured supplies from clandestine workshops.

“Many different parties share responsibility for this criminal activity,” where national and municipal laws are violated, Schaerer said. “A large number of immigrants come into the country illegally in buses. They enter from Bolivia (over the northern border), and ride across nearly half of Argentina without running into any kind of controls,” he added.

He also said the racket is closely linked to drug trafficking, which uses the sweatshops to launder money.

Schaerer said the national government was responsible for failing to codify the Law on the Prevention and Punishment of Trafficking in Persons, and the Buenos Aires city government for failing to monitor and carry out inspections, and for protecting the clothing brands that have been denounced.

Ayala complained that members of the police “guarantee that the sweatshops will be safe from problems in exchange for bribes.”

One example was the workshop where the two boys died. Despite the police guard after the first fire, it was set ablaze on May 7, in an apparently intentional fire aimed at eliminating documents and evidence.

Buenos Aires Mayor Mauricio Macri blamed the sweatshop problem on the lack of jobs, “combined with illegal immigration,” and said the factories often do not let the city inspectors in.

In 10 years, the Alameda Foundation received some 5,000 complaints of slave and child labour, mistreatment and sexual abuse, as in the case of Payro.

But although 110 national and international brands – some of them famous – have been named in legal proceedings for allegedly buying from sweatshops, only one was found guilty.

“It’s a complex system…that is necessarily nourished by immigration” – in other words, a segment of the population without a social safety network or money, said Vásquez.

“When you come here you’re very vulnerable because you don’t know the place…they tell you ‘this is where you’ll work, and we’ll bring your meals,’ and you start to just accept the situation as normal. You don’t question anything because they’re giving you a solution after things were really hard back in your own country,” he said.

He was nine years old when he came to Argentina with his brother and his mother, who pawned their house to find a job. “The idea was to come here and not go back, because we didn’t have money. My last memory of Bolivia is being hungry. I remember her desperation to find some money,” he said.

After a complicated border crossing, they made it to the small factory where his father worked. For three months the family shared a single bunk.

These hardships were compounded by discrimination. At school Vásquez was teased and bullied for his accent and dark skin.

At the age of 16, he started to work in a sweatshop, and his parents opened their own.

“It’s all just seen as normal, and it doesn’t have to do with cultural characteristics,” he said. “When my mom opened up her workshop she didn’t think: now I’m going to exploit people and make money off of them. She had learned how the system worked. She saw working 16 hours, in those conditions, as something normal.

“It’s capitalism overlapping with the issue of immigration,” Vásquez said.

“My fellow Bolivians are often unfamiliar with the laws, and break them,” Ayala said. “They don’t know for example that what they’re doing is trafficking in persons. Sometimes they bring over a relative, thinking they’re doing them a favour, without knowing that they’re committing a crime.”

The Alameda Foundation proposes alternatives like textile cooperatives in workshops that have been confiscated or recovered by the workers.

They are also calling for an obligatory label to guarantee to consumers that what they’re buying was not made in a sweatshop, with slave labour. The governmental National Institute of Industrial Technology tried to adopt a voluntary label, but only one big clothing store accepted it.

Ayala is asking the government “to raise awareness about the laws so people don’t keep bringing people in” and to monitor the big clothing manufacturers, “because without them slave labour wouldn’t exist.”

For its part, the government encourages people to report sweatshops and cases of abuse to the special prosecutor’s office to fight human trafficking and exploitation.

“We say that instead of closing the workshops, we have to open them up, in order to find the solution together with the main actor: the textile worker,” said Vásquez.