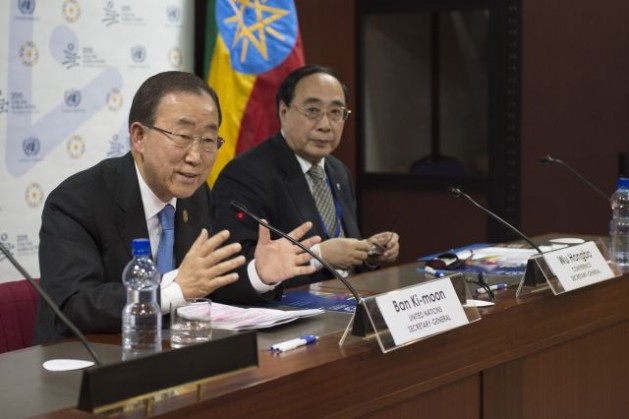 Secretary-General Ban Ki-moon (left) addresses a press conference before departing from Addis Ababa, after attending the Third International Conference on Financing for Development. At his side is Wu Hongbo, UN Under-Secretary-General for Economic and Social Affairs. Credit: UN Photo/Eskinder Debebe

UNITED NATIONS/ADDIS ABABA, Jul 15 2015 (IPS) - Despite high expectations, the third International Conference on Financing for Development (FfD) ended on a predictable note: the United Nations proclaimed it a roaring success while most civil society organisations (CSOs) expressed scepticism over the final outcome.

Hours after the conclusion of the conference in the Ethiopian capital, the United Nations trumpeted the Addis Ababa Action Agenda (AAAA) as a “ground-breaking agreement that provides a foundation for implementing the global sustainable development agenda that world leaders are expected to adopt this September.”

“The outcome will not deliver the reforms we need in areas like tax, that most in civil society had hoped for and, that are needed to increase the resources available for development." -- Dr. Danny Sriskandarajah

U.N. Secretary-General Ban Ki-moon sounded optimistic when he said the agreement was a critical step forward in building a sustainable future for all since it provides a global framework for financing sustainable development.

But Dr. Danny Sriskandarajah, Secretary-General of the Johannesburg-based CIVICUS, was blunt: “This week we saw a further sign that we are at the beginning of the end of the post-World War II (WWII) development world order.”

Rich countries seem unable or unwilling to increase official aid flows, which stand at a fraction of what they themselves promised years ago, he said.

“We are disappointed that the FfD process has not yielded new resources to fund the investments needed to end poverty or taken meaningful steps to address problems in the international financial system,” he said at the conclusion of the conference Wednesday.

He added: “The outcome will not deliver the reforms we need in areas like tax, that most in civil society had hoped for and, that are needed to increase the resources available for development.”

Asked about the failed proposal for the creation of a global tax body, ActionAid’s international tax power campaign manager, Martin Hojsik, told IPS: “The decision is an appalling failure and a great blow to the fight against poverty and injustice.”

He said it means that developing countries, which are losing billions of dollars a year to tax dodging, are not being given an equal say in fixing unjust global tax rules.

“This lost money could have gone to the provision of education, healthcare and other poverty-reducing public services. While the multinationals prosper, the poor and marginalised will suffer,” he said. “The fight for a fair global tax system should not and cannot falter.”

In a statement released here, Oxfam International said unresolved rigged tax rules and privatised development are the major drawbacks of the FfD outcome.

However, after such tense negotiations there can be no doubt that developing countries’ determination to call for true global tax reform and tax cooperation has been noted, and cannot go unheeded for long.

Oxfam International Executive Director Winnie Byanyima said: “Today, one in seven people live in poverty and Addis was a once in a decade chance to find the resources needed to end this scandal. But the Addis Action Agenda has allowed aid commitments to dry up, and has merely handed over development to the private sector without adequate safeguards.”

She said developing countries held firm in Addis on the need to set up an intergovernmental tax body that would give them an equal say in how the global rules on taxation are designed.

“Instead they are returning home with a weak compromise meaning rigged rules and tax avoidance will continue to rob the world’s poorest people.”

Byanyima said fair taxation is vital in the fight against poverty and inequality.

“Citizens must be able to depend on their own governments to deliver the services they need. But it is just not logical to ask developing countries to raise more of their own resources without also reforming the global tax system that prevents them doing this,” she added.

Eric LeCompte, executive director of the Jubilee USA Network, told IPS “while compromised language on a tax committee was reached, we have the first global agreement that notes the harm of illicit financial flows and calls to stop them by 2030.”

Right now the developing world is losing a trillion dollars a year to corruption and tax evasion, he said, pointing out, “those are resources we need to end poverty.”

For the first time international consensus was reached on the importance of an issue that has been at the forefront of efforts by hundreds of research and development organisations for the last 10 years.

Specifically, the FfD3 Outcome Document requires member states to “redouble efforts to substantially reduce illicit financial flows (IFFs) by 2030, with a view to eventually eliminate them, including by combatting tax evasion and corruption through strengthened national regulation and increased international cooperation.”

Additionally, the final text calls on “appropriate international institutions and regional organizations to publish estimates of IFF volume and composition”

The statement said the ability to measure illicit flows was at the heart of significant disagreement during the FfD3 preparatory negotiations in New York earlier this year with the 132-member Group of 77 developing countries calling for country-level estimates of illicit flow volumes.

It also addresses all sources of finance, and covers cooperation on a range of issues including technology, science, innovation, trade and capacity building.

The Action Agenda builds on the outcomes of two previous Financing for Development conferences, in Monterrey, Mexico, and in Doha, Qatar.

Wu Hongbo, the Secretary-General of the Conference, said, “This historic agreement marks a turning point in international cooperation that will result in the necessary investments for the new and transformative sustainable development agenda that will improve the lives of people everywhere.”