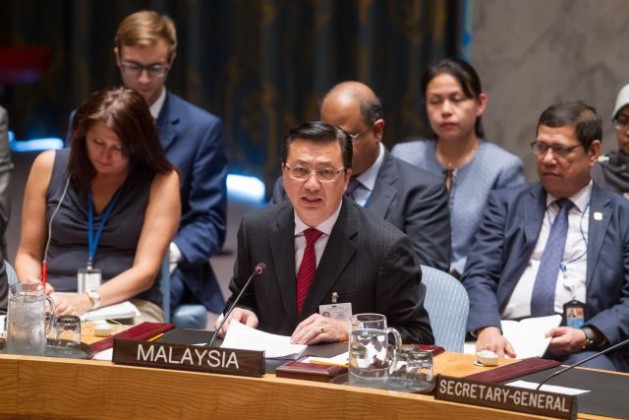 Liow Tiong Lai, Minister of Transport of Malaysia, addresses the U.N. Security Council on July 29, 2015. The Council failed to establish a tribunal on the downing of Malaysian Airlines Flight MH17 due to a veto by Russia. Credit: UN Photo/Loey Felipe

MOSCOW, Aug 10 2015 (IPS) - We refer to the IPS article posted by Mr. Somar Wijayadasa, a former Representative at the United Nations.

Now that the tribunal fiasco is over, let us examine the legal aspects of the inquiry into the crash of Malaysian Airlines Flight MH17 still being conducted by Dutch experts.

Here the question arises: why demand the establishment of an international tribunal, when results of the investigations are still not complete?

As Mr. Wijayadasa correctly pointed out, the toxic game of political football has, unfortunately, dragged this on for over a year without any honest attempt to find out what happened.

The United States and its allies are ever ready to use any excuse to blame Russia. They often abhor any moral imperatives.

There are many questions that demand clarification from a legal point of view.

(a) What rules should be applied in situations of such tragic incidents?
(b) What legal steps should be taken by the State in whose airspace the tragedy took place?
(c) What is the legal status of ongoing investigations?

From an international law perspective, the incident affected the interests of the State of Ukraine, in whose airspace the tragedy took place; the State of Malaysia as owner of Malaysia Airlines; the Netherlands and other States whose nationals died in the tragic incident. Thus, it should be stressed that this tragedy does not affect Russia at all.

In such tragic situations the rules of the Convention on International Civil Aviation, adopted on 7 December 1944 in Chicago, U.S. (Chicago Convention) are to be applied. All U.N. Member States are parties to this Convention, including those affected by this tragedy.

Article 9 of the Convention states that “each contracting State may, for reasons of military necessity or public safety, restrict or prohibit uniformly the aircraft of other States from flying over certain areas of its territory.”

A vivid example is the tragedy that occurred in 2001 in international airspace over the Black Sea, when Ukrainian air defence forces fired a missile and shot down a Russian plane TU-154 with passengers on board.

In this case, the Ukrainian authorities were obliged to follow the Convention requirements of preventive character by immediately providing the description of restricted areas to other contracting States and the International Civil Aviation Organization (ICAO).

Article 9 of the Convention further requires each contracting State establishing such restricted area to require any aircraft entering such areas to effect a landing at a designated airport within its territory.

But the Ukrainian authorities announced a no-fly zone only after this tragic event occurred on 17 July 2014.

Article 26 of the Convention states that “In the event of an accident to an aircraft of a contracting State occurring in the territory of another contracting State, and involving death…, the State in which the accident occurs will institute an inquiry into the circumstances of the accident, in accordance, so far as its laws permit, with the procedure which may be recommended by the International Civil Aviation Organization (ICAO).”

However, the Ukrainian authorities did not initiate an inquiry into the circumstances of the accident, and they did not appeal to ICAO regarding the procedure for the investigation into the tragedy.

Article 26 further states that “The State in which the aircraft is registered shall be given the opportunity to appoint observers to be present at the inquiry, and the State holding the inquiry shall communicate the report and findings in the matter to that State.”

It is evident that Malaysian authorities could not appoint observers because the Ukrainian authorities failed to establish an investigation into the tragedy.

Also, the Convention does not provide for another State the right (other than the State in which the tragedy occurred) to conduct inquiry into its circumstances. If so, what is the legal basis for Netherlands to make any investigation into the Malaysian Airline tragedy?

Therefore, any agreements between the authorities of the Ukraine and the Dutch authorities, including those related to the inquiry into the circumstances of the catastrophe of the Malaysian airplane – inside Ukraine’s airspace – are contrary to the rules of the Convention.

Article 83 of the Convention states that even arrangements “not inconsistent with the provisions of this Convention shall be forthwith registered with the ICAO Council, which shall make it public as soon as possible.”

Notably, the ICAO Council did not publicise any such agreement. We wish to stress that even with such “secret” agreement between the Ukrainian and the Dutch authorities, the latter do not have the right to investigate the circumstances of the tragedy.

The whole irony of the situation lies in the fact that visiting the crash site by experts from the Netherlands and other countries, picking up debris and other evidence to shed light on the causes of the tragedy was made possible only thanks to the support of the militia of Donetsk People’s Republic.

What is surprising here is the lack of professionalism on the side of the Dutch experts who selectively chose some wreckage, dismembered it into several parts, and took them to study, which is categorically unacceptable in terms of the methods of collecting and studying of material evidence of a catastrophe.

This case is further complicated by the fact that many important aspects of the investigation are not conducted by the Dutch experts (who lack appropriate qualification), but in the laboratories of the UK, which has no relation to the case.

Here the question arises: why demand the establishment of an international tribunal, when results of the investigations are still not complete? And how is it possible to rely on the findings of the investigation, if the process itself raises concerns regarding the controversial actions (and omissions) of those who have usurped the right to investigate the circumstances of the disaster?

Against the background of the hypocritical policy exercised by the U.S. and its allies, what surprises us most is that the Dutch authorities, acting under the written scenario of the United States, are not being shy of their mockery targeting the victims of the disaster of the Malaysian airlines in the airspace of Ukraine.

It should be remembered that such actions commensurate not only with the imperatives of international law and morality, but also the canons of God.