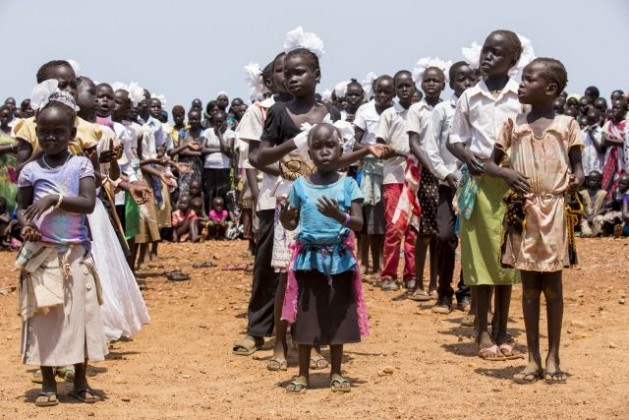 The worst offenders are warring parties in “the world’s five most conflicted countries”, namely Syria, Iraq, South Sudan, Central African Republic (CAR), and most horrifically, Yemen, where civilian casualties have been rising almost by the hour.

The 1949 Geneva Convention, which governs the basic rules of war, has also continued to be violated in conflicts in Afghanistan, Libya, Gaza, Nigeria, Myanmar, Somalia, and the Democratic Republic of Congo (DRC), among other military hotspots.

The U.N. children’s agency, UNICEF, says some 230 million children grow up caught in the middle of conflicts, involving both governments and “terror groups” such as Boko Haram, Islamic State (IS), and Lord’s Resistance Army (LRA).

According to a new report by UNICEF, one of the worst cases is Yemen where an average of eight children are being killed or maimed every day.

The study, titled Yemen: Childhood Under Threat, says nearly 400 children have been killed and over 600 others injured since the violence escalated about four months ago.

In the conflict in Gaza last year, according to U.N. statistics, more than 2,100 were killed, including 1,462 civilians. And the civilian killings included 495 children and 253 women compared with the death toll of 72 Israelis, including seven civilians.

Addressing the Security Council during an open debate on children and armed conflict last month, U.N. Secretary-General Ban Ki-moon said there was “a moral imperative and a legal obligation” to protect children — and they should “never be jeopardized by national interests.”

He said 2014 was one of the worst years in recent memory for children in countries devastated by military conflicts.

The conflict in Yemen is a particular tragedy for children, says UNICEF Representative in Yemen, Julien Harneis. “Children are being killed by bombs or bullets and those that survive face the growing threat of disease and malnutrition. This cannot be allowed to continue,” he added.

As devastating as the conflict is for the lives of children right now, says the UNICEF report, “it will have terrifying consequences for their future.”

Across the country, nearly 10 million children – 80 per cent of the country’s under-18 population – are in need of urgent humanitarian assistance. More than 1.3 million people have been forced to flee their homes, the report said.

The New York office of the Tokyo-based Arigatou International, which has taken a lead role in protecting children at the grassroots level, is hosting a forum on “Religious Ideals and Reality: Responsibility of Leadership to Prevent Violence against Children,” in Geneva next week.

The forum is being co-hosted by ECPAT International (End Child Prostitution, Child Pornography and Trafficking of Children for Sexual Purposes), a global network dedicated to protecting children.

Rebeca Rios-Kohn, director of the Arigatou International New York Office, told IPS interfaith dialogue can play a critical role in bringing about behavioural change in areas of the world affected by armed conflicts.

“Religious leaders who have strong moral authority and credibility can influence positive change,” she added.

She pointed out the example of “corridors of peace” promoted by UNICEF which allowed vaccination of children to take place in conflict areas.

“However, while this is an important and tragic issue which receives great attention by the media, we must not forget that the issue of violence is global and affects many more children within the home, school and community, as well as orphanages, detention centres and other institutions where children are residing.”

Also, she said, the phenomenon of online exploitation of children, which will be addressed at the Forum, is a huge problem that has the attention of experts including Interpol due to its growing magnitude and the fact that the perpetrators can get away with it so easily.

“In other words, the work that we are doing focuses more on the broader dimensions of the problem,” she noted.

“We collaborate closely with the Global Network of Religions for Children (GNRC), another Arigatou Initiative that is led from Nairobi.”

Together, she said, the initiatives draw on the religious teachings and values of all major religions and on the power of prayer, meditation and diverse forms of worship to mobilise concrete actions for children.

Jo Becker, advocacy director at Human Rights Watch, points out that children’s education has also suffered, as armed forces or groups damaged or destroyed more than 1,000 schools around the globe last year.

The most affected schools were in Palestine, where Israeli airstrikes and shelling damaged or destroyed 543 schools in Gaza, and Nigeria, where the Islamist armed group Boko Haram carried out attacks on 338 schools, including the abduction of 276 girls from their school in Chibok, Borno, in April 2014.

The result: hundreds of thousands of children are denied an education, she said.

Meanwhile, the UNICEF report outlines the different dimensions of the crisis facing children in Yemen including:

At least 398 children killed and 605 injured as a result since the conflict escalated in March.

Children recruited or used in the conflict has more than doubled – from 156 in 2014 to 377 so far verified in 2015; 15.2 million people lack access to basic health care, with 900 health facilities closed since March 26; and 1.8 million children are likely to suffer from some form of malnutrition by the end of the year.

Additionally, 20.4 million people are in need of assistance to establish or maintain access to safe water and sanitation due to fuel shortages, infrastructure damage and insecurity, and nearly 3,600 schools have closed down, affecting over 1.8 million children.

Over the past six months, the children’s agency has provided psychological support to help over 150,000 children cope with the horrors of the conflict. Some 280,000 people have learnt how to avoid injury from unexploded ordnances and mines.

Yet despite the tremendous needs, UNICEF says its response remains grossly underfunded.

With only 16 per cent of the agency’s funding appeal of 182.6 million dollars met so far, “Yemen is one of the most under-funded of the different emergencies UNICEF is currently responding to around the world.”

“We urgently need funds so we can reach children in desperate need,” said Harneis. “We cannot stand by and let children suffer the consequences of a humanitarian catastrophe.”