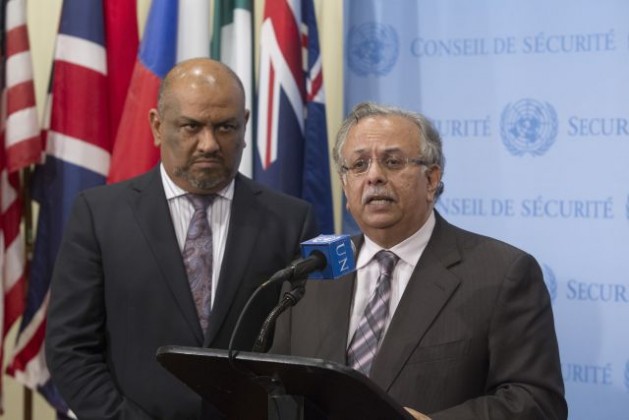 UNITED NATIONS, Aug 21 2015 (IPS) - The United States is providing a thinly-veiled cover virtually legitimising the use of cluster bombs – banned by an international convention – by Saudi Arabia and its allies in their heavy fighting against Houthi rebels in Yemen.

“These weapons can’t distinguish military targets from civilians, and their unexploded sub-munitions threaten civilians, especially children, even long after the fighting.” -- Ole Solvang of HRW

“Any recipient of U.S. cluster munitions has to agree not to use them in populated areas.  Saudi Arabia may be violating that requirement.  State and Defence Department officials are looking into that,” he said.

The 80 non-signatories to the convention include all 10 countries, plus Yemen. The United States, which is providing intelligence to the Saudi-led coalition, is also a non-signatory.

Asked whether it would be alarming or disconcerting if the coalition, is in fact, using American-supplied cluster bombs, Kirby told reporters early this week: “I would just tell you that we remain in close contact, regular contact with the Saudi Government on a wide range of issues in Yemen.

“We’ve urged all sides in the conflict – you’ve heard me say this before – including the Saudis, to take proactive measures to minimize harm to civilians. We have discussed reports of the alleged use of cluster munitions with the Saudis,” he added.

Goose said a U.S. Defence Department official has already said the U.S. is aware that Saudi Arabia has used cluster munitions, so there is no real need for the State Department to confirm or deny.

“Cluster munitions should not be used by anyone, anywhere, at any time due to the foreseeable harm to civilians,” Goose added.

He also said the States Parties to the Convention on Cluster Munitions are meeting for the first Five Year Review Conference of the convention next month and are expected to condemn Saudi use and call for a halt.

Cluster bombs have also been used in Syria, South Sudan, Ukraine and by a non-state actor,

the Islamic State of Iraq and Syria (ISIS), among others.

The Convention on Cluster Munitions, which was adopted in 2008, entered into force in 2010. A total of 117 states have joined the Convention, with 93 States parties who have signed and ratified the treaty.

The convention, which bans cluster munitions, requires destruction of stockpiles, clearance of areas contaminated by cluster munition remnants, and assistance to victims.

Human Rights Watch, a founding member of the international Cluster Munition Coalition, the civil society campaign behind the Convention on Cluster Munitions and publisher of Cluster Munition Monitor 2014, said last May that banned cluster munitions have wounded civilians, including a child, in attacks in Houthi-controlled territory in northern Yemen.

HRW is preparing another report on new use of cluster munitions, scheduled to be released next week.

On Sep. 3, the Cluster Munition Monitor 2015, which provides a global overview of states’ adherence to the ban convention, will be released in Geneva.

An HRW team, in a report released after a visit to the Saada governorate in northern Yemen, said the Saudi-led coalition and other warring parties in Yemen “need to recognise that using banned cluster munitions is very likely to harm civilians.”

In one attack, which wounded three people, at least two of them most likely civilians, the cluster munitions were air-dropped, pointing to the Saudi-led coalition as responsible because it is the only party using aircraft.

In a second attack, which wounded four civilians, including a child, HRW said it was not able to conclusively determine responsibility because the cluster munitions were ground-fired, but the attack was on an area that has been under attack by the Saudi-led coalition.

In these and other documented cluster munition attacks, HRW has identified the use of three types of cluster munitions in Yemen and called upon the United States to denounce their use.

HRW also said the discovery of cluster munitions in Houthi-controlled territory that had been attacked by coalition aircraft on previous occasions and the location within range of Saudi artillery suggest that Saudi forces fired the cluster munitions, but further investigation is needed to conclusively determine responsibility.