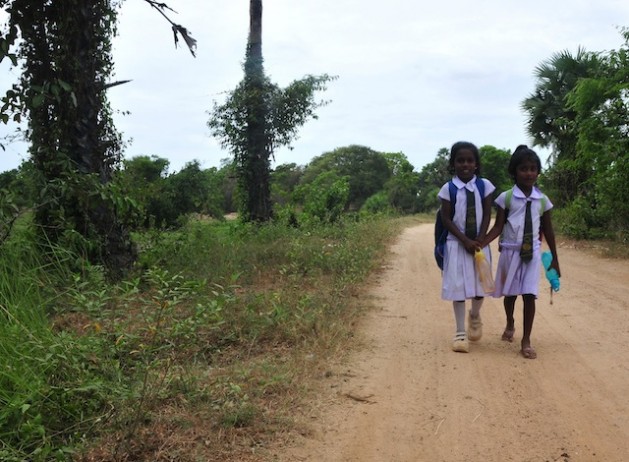 Despite six years of peace, life is still hard in areas where Sri Lanka's war was at its worst, especially for internally displaced people (IDPs). Credit: Amantha Perera/IPS

JAFFNA, Sri Lanka, Aug 30 2015 (IPS) - The new Sri Lankan government that was voted in on Aug. 17 certainly didn’t inherit as much baggage as its predecessors did during the nearly 30 years of conflict that gripped this South Asian island nation.

"Do you know how it feels to live in other people's houses for so long? You are always an outsider. I am getting old [...]. I want to die in my own house, not somewhere else." -- Siva Ariyarathnam, an IDP in northern Sri Lanka
But six years into ‘peacetime’, the second parliament of President Maithripala Sirisena will need to prioritize some of the most painful, unhealed wounds of war – among them, the fate of over 50,000 internally displaced people (IDPs), some of whom have not been home in over two decades.

Though the fighting between government forces and the separatist Liberation Tigers of Tamil Eelam (LTTE) ended in 2009, closing a 28-year-long chapter of violence, Siva Ariyarathnam is still waiting for a government official to tell him when he can go home.

Like tens of thousands of others, Ariyarathnam fled with his family when the military took over his land in the country’s Northern Province in the 1990s as part of a strategy to defeat the LTTE, who launched an armed campaign for an independent homeland for the country’s minority Tamil population in 1983.

The outgoing government says it plans to give the land back to 50,000 people, but has not indicated when that will happen, and Ariyarathnam says he is running out of time.

“Do you know how it feels to live in other people’s houses for so long? You are always an outsider,” Ariyarathnam told IPS. “I am getting old and I want to live under my own roof with my family. I want to die in my own house, not somewhere else.”

Ariyarathnam’s tale is heard too frequently in the former war-zone, a large swath of land in the country’s north comprising the Vanni region, the Jaffna Peninsula and parts of the Eastern Province, which the LTTE ran as a de facto state after riots in 1983 drove thousands of Tamils out of the Sinhala-majority south.

During the war years, displacement was the order of the day, with both the LTTE and the Sri Lankan government forcing massive population shifts that would shape ethnic- and communal-based electoral politics.

For ordinary people it meant that the notion of ‘home’ was a luxury that few could maintain.

The cost of the conflict that finally ended in May 2009 with the defeat of the Tigers by government armed forces was enormous.

By conservative accounts over 100,000 perished in the fighting, while a report by the United Nations estimates that as many as 40,000 civilians died during the last bouts of fighting between 2008 and 2009.

According to the Ministry of Resettlement, Sri Lanka’s post-war IDP returnees stood at an impressive 796,081 by the end of June.

But the same data also reveal that an additional 50,000 were still living with host families and in the Thellippali IDP Centre, unable to return to villages still under military occupation.

These militarized zones date back to the 1990s, when the army began appropriating civilian land as a means of thwarting the steadily advancing LTTE.

By 2009, the military had confiscated 11,629 acres of land in the Tamil heartland of Jaffna – located on the northern tip of the island, over 300 km from the capital, Colombo – in order to create the Palaly High Security Zone (HSZ).

This was the area Ariyarathnam and his family, like thousands of others, had once called home.

Many hoped that the war’s end would see a return to their ancestral lands, but the war-victorious government, helmed by former President Mahinda Rajapaksa, was slow to release civilian areas, prioritizing national security and continued deployment of troops in the North over resettlement of the displaced.

A new government led by President Maithripala Sirisena, Rajapaksa’s former health minister who took power in a surprise January election, promised to accelerate land release, and turned over a 1,000-acre area from the Palaly HSZ in April.

But top officials tell IPS that genuine government efforts are stymied by the lack of public land onto which to move military camps in order to make way for returning civilians.

“The return of the IDPs is our number one priority,” Ranjini Nadarajapillai, the outgoing secretary to the Ministry of Resettlement, explained to IPS. “There is no timetable right now, everything depends on how the remaining high security zones are removed.”

The slow pace of land reform has kept IDPs mired in poverty, according to the Internal Displacement Monitoring Centre (IDMC), an arm of the Oslo-based Norwegian Refugee Council.

“The main reasons why there are higher poverty levels among IDPs include the lack of access to land during displacement to carry out livelihood activities, [and] the lack of compensation for lost or destroyed land and property during the war, which was acquired by the military or government as security or economic zones,” Marita Swain, an analyst with IDMC, told IPS.

An IDMC report released in July put the number of IDPs at 73,700, far higher than the government statistic. Most of them are living with host families, while 4,700 are housed in a long-term welfare center in Jaffna, the capital of Sri Lanka’s Northern Province.

The lingering effects of the policies of the previous administration led by Rajapaksa, which prioritized infrastructure development over genuine economic growth for the war-weary population, has compounded the IDPs’ plight, according to the IDMC.

Despite the Sirisena government taking office in January, it has been hamstrung over issues like resettlement for the past eight months as it prepared to face parliamentary elections that pitted Rajapaksa-era policies against those of the new president.

Nadarajapillai of the Ministry of Resettlement said the new government is taking a different approach and reaching out to international agencies and donors to resolve the issue.

The Office of the U.N. High Commissioner for Refugees (UNHCR) is helping the government devise a plan to resolve the IDP crisis, added Dushanthi Fernando, a UNHCR official in Colombo.

Still, these promises mean little to people like Ariyarathnam, whose displacement is now entering its third decade with no firm signs of ending anytime soon.