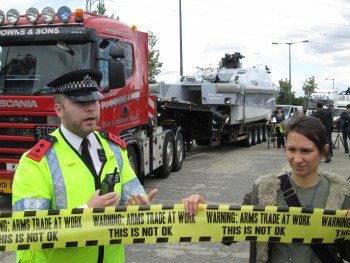 Participants in what is officially known as the Defense and Security International (DSEI) include 61 countries that violate human rights, such as Saudi Arabia, Egypt, Angola and Algeria. According to the website, some 30,000 visitors are expected.

More than 1,500 companies will exhibit their military wares, including the U.S. and UK giants Lockheed Martin, Boeing, Raytheon and BAE Systems. Forty foreign governments will have pavilions. Sponsors and co-sponsors of the event include Turkey, South Africa, Northrup Grumman and Hewlett Packard.

The four-day fair has drawn furious debate between human rights activists and those who say the arms industry provides thousands of jobs and valuable exports.

Citizen activist groups using Twitter and other social media have jumped into action to condemn the fair. Traders at previous arms fairs, they note, have been able to buy and sell equipment used for torture including electric shock stun guns and batons, leg-irons, and belly-, body- and gang-chains. There has also been a range of illegal cluster-munition weaponry advertised at the fair.

Nine, companies which have attended the DSEI fair between 2005 and 2013, have breached UK law, according to human rights campaigner Amnesty International.

This year’s DSEI comes as the UK government ramps up its effort to sell weapons to countries in the Middle East, including Saudi Arabia, by far its most lucrative single arms market.

The UK headquarters of Amnesty also spoke up: “In the past, torture equipment has been on offer right on our doorstep. Things like illegal leg irons and electric-shock batons have been shamelessly advertised and it’s blindingly obvious the law needs tightening up.

“We need strengthened laws – and crucially we need proper enforcement – to stop Britain being used as a showroom for torturers to advertise their disgusting wares…” the group said.

Groups organizing on Twitter against arms sales include Stop the Arms Fair!, Stop DSEI, Pax Christi and the Campaign Against Arms Trade, among others.