Ian Williams is Senior Analyst, Foreign Policy in Focus and columnist for the Tribune, and who recently completed a new edition of The U.N. for Beginners

UNITED NATIONS, Sep 23 2015 (IPS) - Will Tokyo’s bid for a permanent seat on the U.N. Security Council be frustrated by its Foreign Ministry’s undiplomatic and uncalled for attack on U.N. Secretary General Ban Ki Moon?

Japan’s attempt certainly will not be helped by the Japanese Foreign Ministry official who complained sniffily that the world body “should take a neutral position on events that focus mostly on the past” and expressed “strong displeasure” at Ban’s attendance in Beijing for the 70th Anniversary of the end of the Second World War. 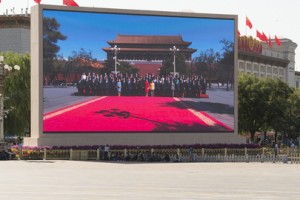 The churlish rebuff, with overtones of anti-Korean sentiment came just as the issue of reforming the Security Council is having a periodic upsurge of interest in this 70th session of the United Nations. It is of course no accident that the 70th Anniversary of the U.N. coincides with the 70th Anniversary of the end of the War. It was World War Two that gave birth to and shaped the United Nations, which is why China is on the Security Council and Japan is not.

But the U.N. Charter is about controlling inter-state aggression of the kind that the defeated nations in the Second World War indisputably started. Japan invaded its neighbors, not the other way round, and in general its occupations were brutal, despite the rhetoric about co-prosperity.

The U.N. is not neutral, it was an organization founded to defeat the Axis powers, particularly Germany and Japan and that is explicit in the U.N. Charter still. Although Poland moved a pious resolution in the General Assembly after the reunification of Germany declaring that the “enemy states” clause in the U.N. Charter no longer applies, the clause is still in the Charter – and the unrepentant attitude from the Abe administration is calculated to remind the Chinese, and indeed the Russians that because of the war they have a veto on all reform proposals.

Certainly, Poland realized that the reunified Germany was not the same country as in 1939 and was expediently magnanimous in its declaration. One can hardly imagine either of the Koreas emulating that with Japan, which had to be pressured by the other members of the Council to vote in the end for the Korean Secretary General to make it unanimous.

There is no end of skeptical comments one can make about the seventieth anniversary of Axis defeats. Historically, maybe Ban should have gone to the Chiang Kai Shek memorial in Taiwan – or the Republic of China as Beijing prefers they call themselves! It was after all the ROC not the PRC that was the official combatant and final victor in the war and which was accordingly granted a seat on the Security Council.

But then it was the USSR and not Russia that won a permanent seat and did so much to defeat the Nazis that we, as much as Moscow, tend to overlook the Stalin Hitler pact just before. Each of the victors has skeletons in their cupboards, from the massacre of Polish officers at Katyn Wood to Dresden and Hiroshima.

After 70 years, it is indisputably time to reform the Security Council, but it is also indisputable that the permanent five have a veto on that process and that many other members have mutually contradictory plans for how to reform it. It is highly likely that the Japanese comments have given ammunition to those hostile to its bid for a permanent seat.

There are in fact very good reasons, for justice and efficiency, not to expand the number of permanent seats on the council. Many countries have braved the displeasure of big neighbors who are candidates to say so, and to demand that at best the contestants be eligible for re-election or to have a longer mandate. The likely result is a stalemate in the reform process and Tokyo’s intemperate response has made that outcome even more likely. Chinese hostility and potential veto make the other reform proposals.

Speaking before the Beijing parade, Ban’s office said he “believes that it is important to reflect on the past, look at the lessons we have learned and how we can move ahead to a brighter future based on these lessons.” Shinzo Abe should have drawn some lessons. He would have been better accompanying his former colleague Tomiichi Murayama to Beijing and reinforcing his historic apology for the war in 1995 in Beijing.