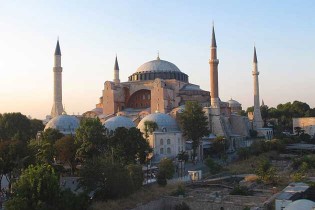 By Ian Williams
President Erdogan’s “reconversion” of the Hagia Sophia, into a mosque is a very Trumpian move, making a populist gesture to his base evoking shared misconceptions of history, reckless of its actual diplomatic and economic cost.

By Ian Williams
An old adage passed on by veteran U.N. staff to younger recruits is, “Do nothing whenever possible. It’s safer.” For a junior officer that might indeed be career-enhancing.

By Ian Williams
Looking at the deserved outpouring of eulogies over Kofi Annan I could not help remembering the advice of the old Latin saying, “Say nothing about the dead unless it’s good.”

Bolton: Is He the Walrus –Goo goo g’joob?

By Ian Williams
President Trump’s nomination of John Bolton as his National Security Advisor highlights the deep irrationality of this White House’s global agenda. Apparently, the world has hitherto been spared Bolton’s robust sabotage only because the President has an eccentric visceral antipathy to his mustache, but so far could not find another, clean-shaven, candidate in the rapidly draining pool of applicants for White House jobs.

By Ian Williams
Will Tokyo’s bid for a permanent seat on the U.N. Security Council be frustrated by its Foreign Ministry’s undiplomatic and uncalled for attack on U.N. Secretary General Ban Ki Moon?

By Ian Williams
The Yeosu Expo 2012 exemplifies how the Republic of Korea (ROK) has made its debut on the world stage.
ADVERTISEMENT ADVERTISEMENT