Ian Williams is a former President of the UN Correspondents’ Association (UNCA) and author of UNtold: The Real Story of the United Nations in Peace and War 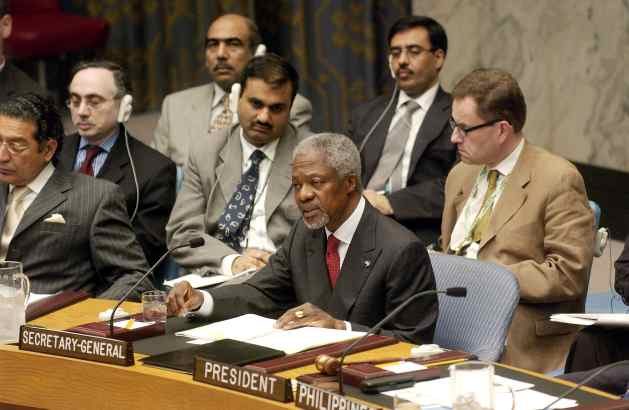 UNITED NATIONS, Aug 27 2018 (IPS) - Looking at the deserved outpouring of eulogies over Kofi Annan I could not help remembering the advice of the old Latin saying, “Say nothing about the dead unless it’s good.”

But one can’t help wishing that there had been more support of Kofi Annan when he was alive, not least when the Murdoch media Faux News fabricators persecuted him with the spurious Oil For Food scandal.

It was one of the greatest Fake News concoctions in history, almost up there with Iraqi WMDs, perhaps unsurprisingly since many of the sources for both were the same based on alleged UN corruption in the program that delivered food to Iraqi civilians in the face of US insistence on maintaining sanctions against the Iraqi regime.

They knew what they were doing: it was not just an individual they were slandering. Kofi Annan epitomized several facets of the role of a UN Secretary General, but none better than being an inspiring public face for the organization whose manifested dignity and integrity helped mitigate the sad reality of a body often hamstrung by the self-seeking sordid squabbles of its member states.

The attack was both an attempt to punish him for his temerity in saying that the Iraq war was illegal, and to challenge the prestige of the UN and the whole concept of international order.

The attack was both an attempt to punish him for his temerity in saying that the Iraq war was illegal, and to challenge the prestige of the UN and the whole concept of international order.

The onslaught was all the heavier because they sought to demolish the reputation of someone who was the archetypal nice guy, who would have made a good electoral candidate. He remembered families and people, greeted everyone of all ranks affably and kept his cool.

The only time I saw him lose his temper was when he reprimanded the juvenile behavior one of the Murdoch press corps who was baiting him about trivia associated with the Oil For Food scandal. Some of the correspondents were shocked that when this animal was attacked he fought back. Others welcomed the well-merited comeuppance.

His original election had come about against the background of the Balkan Wars and it must be remembered that it was the result of an American veto against the reappointment of Boutros Boutros-Ghali, who suffered from a bipartisan alliance of Madeleine Albright and Republican Senator Jesse Helms, who were both incensed by the Secretary General’s refusal to bow to Washington.

Of course, that made Kofi Annan the American candidate, subject to some suspicion from other nations, and indeed his ideas of world governance and policy were not too far from the stated principles of the Clinton administration. However, as he was well aware, that just because an administration loudly declared lofty ideals did not necessarily mean it would implement them in practice, and was guaranteed to take umbrage if anyone pointed out the shortfall.

Boutros-Ghali was also the subject of posthumous eulogies from many who stayed silent when he was under attack, since he confronted the same quandary as Annan: how to cope with a US that wanted to treat the UN as, not just an instrument of foreign policy, but as a foil in domestic politics.

The White House wanted to make reassuring liberal noises about stopping atrocities to one wing of American politics, while promising the isolationist wing that it would trim spending on the UN and would not risk American lives to implement policies that the US supported.

At the time of Rwanda, that entailed a Presidential Directive from Clinton that was in essence more isolationist than anything most of the Republicans could dream up: that the US would veto any peacekeeping operation that did not directly benefit US foreign policy objective, which did not at the time seem to include the prevention of genocide, as untold thousands of Bosniaks and Rwandans discovered.

It was at first unsure whether Kofi Annan’s years of service in the UN were an asset or a disadvantage, but it became clear how useful they were, since he knew just how the organization worked and was all too aware of the competing pressures on UN staff, not least the political pressures.

And among those pressures was the major one: how to accommodate the US, which was essential for the effective functioning of the organization, while preventing the organization from becoming a mere instrument of US policies often opposed by most of the members.

He was no mob orator. He was not cut out for the bully pulpit or the soapbox. When he was first elected, his advisors pushed him into being coached for public speaking but gave up and people realized that his quiet authority was in some ways more effective than soaring rhetoric and inspired but content-free demagoguery. People had to strain to listen to him – and they did, because what he had to say was worth listening to.

His statements were carefully weighed  before delivery and designedly non-provocative. They aspired to higher things, but they were definitive and authoritative, and usually soundly based both in ethics and his own pragmatic sense of what was possible. He was an accomplished tightrope walker, even he was wobbling by the end, since while most of the member states recognized the competing imperatives, American administrations, of all complexions, have a notorious lack of empathy for other agendas beyond the re-election of the President.

People sometimes say that he was not outspoken enough, not loud enough, but that was actually a strength. When he spoke, it was not just a trite soundbite, he said what had to be said even it was sometimes unpopular.

When he came back from negotiating with Saddam Hussein and said it was a testament to the efficacy of diplomacy, not enough people listened to his corollary– when backed with the threat of force.

His other breakthrough was teamwork. He had risen through the UN ranks without acquiring the pompous self-importance of many promoted above their capabilities and assembled an articulate and confident team who could push out the envelope on events and say what needed to be said, without implicating him directly.

One of his landmark changes to UN culture was to open up a degree of transparency: Before only designated spokespeople were allowed to talk to the media but he mandated staff to respond to journalists’ enquiries as long as they did not purport to represent the organization’s views.

That posture of dignity allowed him to steer the landmark Responsibility to Protect resolution through the sixtieth anniversary summit and it is still a landmark even if many of those who did not have the political courage to oppose him and it at the Summit have done so much to frustrate it since. It allowed him to rally support for an ambitious world development agenda backed by a wide spectrum of disparate constituencies.

All idols have feet of clay, but for some the mud goes much higher than others. No one is perfect, high office demands compromises for practical achievements to win allies and majorities. But in office, on development goals, poverty, human rights, gender equality, Rwanda, Cyprus and many other issues, he advanced the UN agenda even as he rewrote it.

After leaving the UN he continued to do so, with the Elders and his own foundation. He was no mere bureaucrat, he was not after the big desk and the title, he wanted to contribute to the world and thought the SG’s office was the best place to do so.

His legacy  will survives for sometime, but one must wonder how he would have coped with the present President who, unlike Clinton, is unable to betray his principles, since he does not seem to have any.

But it is perhaps not too late for the present Secretary General to study and emulate Kofi’s tradition of quietly but prominently presenting himself on behalf of the organization, and the team work that made it possible.

Ian Williams is also a senior analyst who has written for newspapers and magazines around the world, including the Australian, The Independent, New York Observer, The Financial Times and The Guardian.