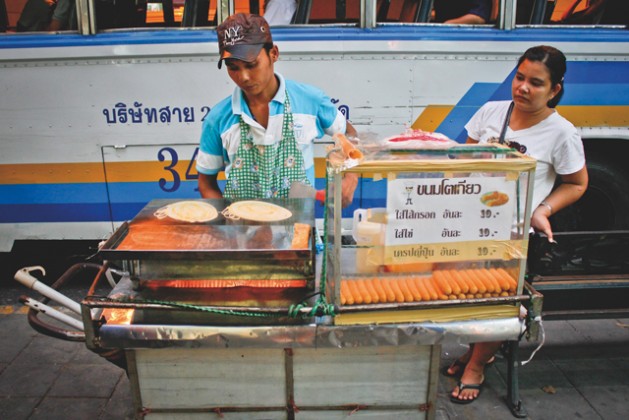 A better quality of life should be the business sector’s concern, too. Credit: S Li.

KUALA LUMPUR, Oct 29 2015 (IPS) - When his father drove back to pay the 47 Malaysian cents they owed to the food stall they had just left, then nine-year-old Anis Yusal Yusoff, today president and chief executive officer of the Malaysian Institute of Integrity, learned the meaning of standing firm by one’s values.

“To me, that was having integrity, having values,” Yusoff recalled while speaking at the ASEAN Responsible Business Forum held here this week in the Malaysian capital. “We had to drive back so we can pay the stall owner what we owed him, even if it was only 47 sen (less than one US dollar) he said.

It may sound cliché, he continued, but integrity should be taught early in life so that it is carried to adulthood, and especially when a person joins the corporate world.

He asked parents and schools to teach children to be “God-fearing and law-abiding,” so that they have firm ethical foundations in life. A walk in a public park, for instance, can teach a child not to throw trash or vandalise flowers because the park belongs to everyone and should be cared for by all who use it.

Simple things like these may be far removed from what business people usually discuss in boardrooms or pay attention to in the world of negotiations, dividends and profit margins. But Yusoff said that business integrity is seen in how people work, in corporations and organisations big and small.

Doing good and practising integrity when doing business resonated through the three-day forum, which was organised by the Singapore-based ASEAN CSR Network. The conference aims to have the public sector, private sector and civil society advance responsible business practices and partnerships as deeper economic integration takes root in the 10-member Association of Southeast Asian Nations (ASEAN) with the launch of the ASEAN Economic Community in December 2015.

Attended by some 250 participants from governments, civil society groups, trade unions, academe and business, the forum discussed issues that businesses in the region have identified as important to their brand of “corporate social responsibility”: responsible business practice in agriculture, respect for human rights, assurance of a decent workplace and a path toward a corruption-free ASEAN business community.

“Businesses are widely recognised as the engine for economic growth and poverty eradication,” said Yanti Triwadiantini, chair of the ASEAN CSR Network. “The forum can provide answers by helping transform companies from merely profit-driven entities into agents of change for responsible and sustainable development.”

As agents of change that have a stake in the betterment of the societies they do business in, businesses take an active role in ensuring equitable, inclusive and sustainable development, speakers at the forum explained.

A business can be good if it has good people running it, stressed Lim Wee Chai, founder and chairman of Top Glove Corp, which produces rubber gloves. “We create awareness in the workforce on how to be good in the conduct of business – from picking up rubbish daily to wearing an anti-corruption badge,” he said.

“We encourage our people to do good. We educate them,” he told the forum. But in the wider world of ASEAN and its partner governments and organisations – as ASEAN companies get more opportunities to go across national borders – “being good alone is not good enough; make sure your neighbouring countries are also doing good,” he pointed out.

Yanti stressed that the need for the private sector to be involved in defining responsible business practices and adhering to these values, against the backdrop of the momentum of economic integration at the launch of the ASEAN Community this year.

The ASEAN Community will officially be launched by ASEAN leaders at their 27th Summit in November in this city. It marks the progression of the Southeast Asia’s main regional grouping into a community of more than 600 million people in economic, socio-cultural and political terms. If it were one single economy, ASEAN would be the seventh largest economy in the world with a combined GDP or 2.4 trillion dollars in 2013. “2015 is a milestone year for ASEAN,” said Yanti.

At the same time, Yanti asked participants to be mindful of the need to narrow the development gap among the richer and poorer ASEAN countries, and the gap within these countries, by ensuring protection for the most vulnerable groups such as children, women and migrant workers.

“Many of the problems we face today are also caused by irresponsible companies who take advantage of the prevailing conditions to earn maximum profits at the expense of people and the environment,” she said. “The current haze (is) as prime example of such a phenomenon,” she added, referring to how the drive for profits has pushed plantation owners and companies with concessions in Indonesia to use burning practices that annually pollute the air across several countries in Southeast Asia and cause regional tensions. This year’s haze episode has been the worst since 1997.

Corruption, the concern of many ASEAN citizens and a touchy topic among governments, also drew lively discussion.

“More often, corruption occurs when the government transacts business with the private sector,” said Francesco Checchi, regional anti-corruption adviser of the Southeast Asia and the Pacific office of the UN Office of Drugs and Crime. International mechanisms such as the UN Convention against Corruption (UNCAC) could be a guide to not just eliminate but to prevent corruption in business, he added.

The forum’s guest of honor, Sen. Paul Low Seng Kuan, minister for governance and integrity of the prime minister’s department of Malaysia, pointed that there are “businesses that partner with corrupt political institutions.”

“Corruption has eroded the integrity of almost all institutions,” explained Jose Cortez, executive director of Integrity Initiative Inc in the Philippines. In his country, he said, a trust-building movement has been mounted where institutions are trying to win the public’s confidence by signing “integrity initiative pledges” that commit to transparency and honesty in doing business.

“If transparency is prevalent in a company’s culture, then it is easier to detect corrupt practices,” he said.

From a larger perspective, the quest for “human dignity” is still any businessperson’s aspiration, added Thomas Thomas, chief executive officer of the ASEAN CSR Network. “I’ve heard the quest to doing good many times in this forum, and the difficulty of being good, but it is attainable,” he pointed out.

This feature is part of the ‘Reporting ASEAN: 2015 and Beyond’ series of IPS Asia-Pacific and Probe Media Foundation Inc.