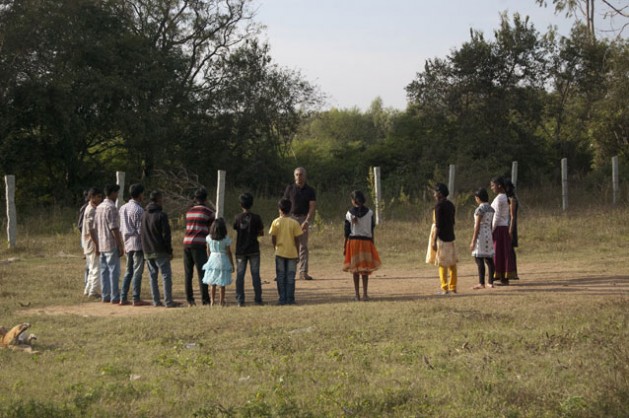 As the globe marks World AIDS Day, December 1, experts say still there is much to do to end the spread of HIV and Aids. Ending the Aids epidemic is part of the UN’s Sustainable Development Goals, to be reached by 2030.

UNAIDS says Asia and the Pacific have the second largest population of people living with HIV, at an estimated 4.8 million [4.1 million–5.5 million] people. Figures for India are difficult to pin down as there is a wide gap in data collection and dissemination.

According to a UNAIDS Gap report from 2014 said India has the third largest HIV epidemic in the world. In 2013, HIV prevalence in India was an estimated 0.3%. This equates to 2.1 million people living with HIV. In the same year, an estimated 130,000 people died from AIDS-related illnesses.

Children living with HIV face tremendous challenges. IPS correspondent Malini Shankar spent time with some of these children in Bangalore and this is what they shared with her (the names of all the children have been changed to protect their privacy):

Dr. Ashok Rau, the Chief Executive Officer and Executive Trustee of the Freedom Foundation in Bangalore said, spending time with these children “certainly helps, if done in a very sensitive way, because children and people living with HIV and AIDS still suffer from stigma and discrimination with social acceptance still very poor.”

Neethi, 12, is new to the Freedom Foundation orphanage and is still feeling the difficulty of the transition.

“I am studying in the 6th Standard (grade). I was 2 ½-years-old when my mother died. I do not remember her face either. She died of HIV/AIDS. No I do not know how old she was or if she had it first or Dad had it first. After my mother’s death my father left me in the care of my maternal grandparents.”

She described how her father remarried and his second wife also had HIV. She went to live with them but she said she entered a hostile environment. She said at some point after her mother died, she was diagnosed with HIV.

“In the hospital I was admitted to the female paediatric ward. I had been put on a drip and my hand was swollen. So my dad was feeding me the evening supper. At 8.00p.m. the hospital staff sent my father packing because visiting hours were over. He was made to sit outside and my dad asked my step mother to feed me because no men were allowed to stay in the female paediatric ward. But my step mother refused to feed me and instead she took it and ate it herself,” said Neethi.

After this Neethi’s father decided to move her to the Freedom Foundation. “My father realised that my step mother was ill-treating and abusing me. My father brought me here and admitted me here. He is still alive, he visits me, showers me love, and calls me once a week. I am desperate and I crave for love because I feel the world does not care for people like me, counsellors tell me to be brave and to face the world.”

Hamsini, 16, is fighting hard to come to terms with her future. Her father died a decade ago and her mother six years ago. “I did not know that my parents were HIV-positive. It was when my younger sister too succumbed to HIV that I was tested. It was not known for sure if I was HIV-positive because the test results were not conclusive.”

She described the stigma attached to the disease and how she suffered. “After my parents and sister died, I was being stigmatised and discriminated, emotionally abused and insulted by relatives. I felt confounded at this new reality. Then I was brought here to Freedom Foundation and about three years ago when the tests confirmed that I too am HIV-positive.”

Basavalinga, 15, comes from Gulbarga one of the northernmost districts in the state of Karnataka. “I came to the Freedom Foundation orphanage in 2009. My father died of HIV/AIDS in 2005 and my Mother died of HIV/AIDS in 2007. But I remember in 2004 when I was only four years old, someone had come and told me that I was suffering from an incurable disease. My parents took me to someone who branded me on my stomach with a hot iron rod. The scars are still there,” he said.

“After both my parents succumbed to HIV/AIDS my uncles were taking care of me, but they started ill-treating me and discriminating me among other children. That is when I sensed that something was wrong. In 2007 I was tested for HIV and it was positive but my uncles took care of me till 2009 and that was when I was brought to Freedom Foundation orphanage. “

Tejas and his 14-year old brother Tarun come from Malur in Kolar district near Bangalore. Their entire family was hit hard by the disease. Both have been at the Freedom Foundation for six years. Tejas is not sure if he is HIV positive. “But my younger brother Tarun is HIV-positive. My father had three wives and he had two sons with each of his three wives but all my parents are now dead and gone, they all died of HIV/AIDS. I do not know if my stepbrothers are also HIV-positive,” he said.

Ashok Rau, the Freedom Foundation’s CEO told IPS, “Children need school fees, books, uniforms for effective integration. The criterion of seamless integration is education and life skills besides medication and effective counselling; many have got married and are living productive lives as young adults.”

“Our counselling and support for integration has had some amazing success stories: some of our HIV orphans have gotten married, some others are working in leading multinationals, and corporate sector; it vindicates the need for education, training in life skills and mainstreaming these orphans.” Rau said funds are badly-needed to keep the orphanage going.