By May Carolan Reprint | | 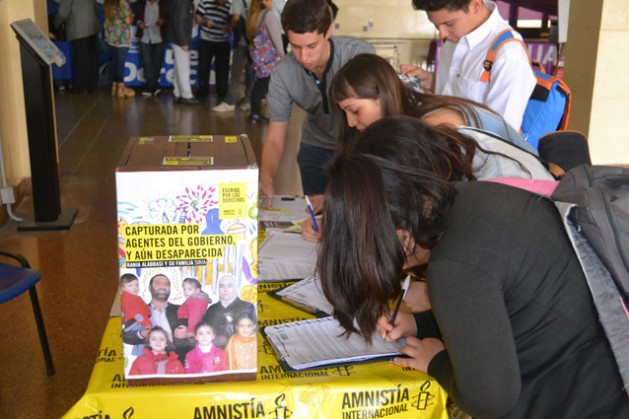 LONDON, Dec 25 2015 (IPS) - “How would you like it if you were just expressing your feelings and someone just put you in jail?” This is how an eight-year-old American schoolchild asked King Salman of Saudi Arabia not to flog imprisoned blogger Raif Badawi.

This was one of millions of messages sent on behalf of Raif during the 2014 Write for Rights campaign, the world’s biggest human rights campaign held every year by Amnesty International. Letters, emails, SMS messages, faxes and tweets sent by hundreds of thousands of people around the world express support for the victims of human rights abuses like Raif Badawi, and call on the authorities to put right their wrongs.

This December, Amnesty International supporters around the world are campaigning on 12 cases of human rights abuses. Several of them illustrate the abusive lengths governments will go to in their efforts to stymie freedom of expression.

Malaysian cartoonist Zulkiflee Anwar Ulhaque, or Zunar, faces jail for tweets he sent. In Myanmar, student leader Phyoe Phyoe Aung is detained and faces imprisonment after being arrested at a peaceful protest. Congolese activists Fred Bauma and Yves Makwambala face jail and potentially the death penalty for encouraging young people to get involved in politics.

These are the faces of a global clampdown on human rights defenders and freedom of expression.
Around the world, governments are cracking down on dissent, increasingly targeting people who promote or protect human rights and stand up to abuses.

But their crackdown reveals their fear of free expression. Words have the power to frighten the most repressive governments, and bring comfort to victims of the most egregious abuses and injustices.

The campaign helps people like Zunar, Phyoe, Fred and Yves by mobilizing a secret weapon that governments fear: your voice.

Change does not happen overnight. It takes constant hard work to keep up a flow of small acts of solidarity and letters to authorities that together build up the pressure. Often we start with small victories: better conditions for a prisoner, such as gaining access to medical care, or being able to see their families.

We try to keep the case alive, we ask our supporters to write to the authorities, we contact journalists to keep the story active. Anything to make sure the person’s case remains in the spotlight. We mark their birthdays and the anniversaries of their arrest or conviction. We broadcast the voices of family members calling for justice and seeking redress. When leaders who can make a difference embark on high-level foreign visits, activists are there so that they cannot forget prisoners of conscience who languish in jail.

And while we bring the injustice to light, we work to help people survive the darkness of their cell. In schools, in community centres and on the streets, ordinary people take a moment from their day to hear stories of injustice and write a personal message to someone they don’t know.

The results are a testament to the power of a story to mobilize solidarity across borders and societies.

Time and time again prisoners of conscience tell us how much support from the outside world meant to them.

LGBTI activist Ihar Tsikchanyuk from Belarus says the letters from school children had an unexpected outcome. When he showed the letters to his neighbours, they were able to see that in other parts of the world children learn about homosexuality and it is not considered scary or criminal. This led to one neighbour setting up a support group for parents to help them understand that homosexuality is nothing to be afraid of.

On good days, higher authorities are moved, or shamed, to re-investigate a case, or allow a prisoner to see their family. On great days, authorities bombarded by tens, sometimes hundreds of thousands of messages relent and set a prisoner of conscience free. Those are days that remind us why we fight for human rights.

Just last month Filep Karma was released after being unjustly jailed for more than a decade for simply raising an independence flag at a political ceremony in Indonesia. Amnesty International supporters sent more than 65,000 messages of support to Filep and called on the authorities to release him during the 2011 Write for Rights campaign. At first we saw incremental steps. His family told us that his prison conditions improved, and they had better access to him. He was allowed to go to his daughter’s wedding. “That gave us hope and spirit”, he says. “I still need the support of Amnesty International because the fight for the human rights in Papua has not yet finished, the release is only the beginning.”

Filep’s is one of many lives immeasurably helped by the power of a pen.

Cynics may say that these individual victories are not enough to turn the tide of repression. But we cannot see people abandoned to despair. Every victory gives hope to other prisoners that the day when justice is done will come and they will go free.

In the end, this is about ensuring that victims are not alone. It is about international solidarity: ordinary people being ready to spring into action when leaders and governments fail to respect human rights. No victim of injustice need never be completely alone, even if their only ally is a schoolchild on the other side of the world writing a letter on their behalf.

If you want to do something about human rights, use the most powerful weapon for justice at your disposal: your voice. It is not too late to make a difference. You still have time to add your voice to the millions of messages sent this year. Go online, or pick up a pen, and write a letter like someone’s life depended on it. It often does.

Write for Rights, Amnesty International’s annual letter-writing marathon, runs until 17 December, but you can still send messages of support to victims of human rights abuses or call on governments to act by taking part in the campaign here.