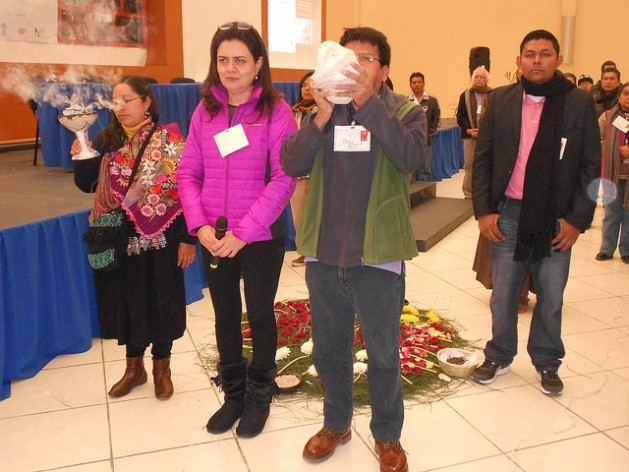 Participants in a Latin American indigenous conference on the "Laudato Si" encyclical give thanks to the four cardinal points of the compass in the opening ceremony of the two-day forum in the city of San Cristóbal de las Casas in the southern Mexican state of Chiapas. Credit: Emilio Godoy/IPS

Pravia, a Misquito indigenous woman from Honduras, was taking part Feb. 13-14 in a gathering of native people from Latin America in San Cristóbal de las Casas, in the southern Mexican state of Chiapas.

The forum was part of the activities organised ahead of the pope’s Monday Feb. 15 visit to this impoverished state with a mainly indigenous population.

“With the ‘Laudato Si’ encyclical we defend the rights to land, territory and forests,” was the theme of the two-day gathering, which referred to the first encyclical in history dedicated to the environment, published by the pope in June 2015.

“We want tangible results, for each country to take the pope’s message on board,” Pravia, the representative of the non-governmental organisation Asla Takanka Miskitia-Moskitia Unity of Honduras, told IPS.

Honduras and Nicaragua are home to some 280,000 Misquito Indians. Like all indigenous peoples, they have fought, and continue to fight, in defence of their identity, culture, territory and natural resources, in the face of a model of development that marginalises them, after surviving genocide at the hands of the European conquistadors and colonialists.

In particular, Misquito lands are vulnerable to the effects of climate change, such as unusually heavy rainfall, intense drought, flooding and a rising sea level, all of which impact agricultural production and have led to the appearance of emerging diseases.

That is why native peoples identify with Laudato Si, which translates to “Praise Be to You” in medieval Italian, in which Pope Francis reflects “On Care for Our Common Home” – the planet.

The encyclical, which takes its title from Saint Francis of Assisi’s 13th-century Canticle of the Sun, does not make any specific reference to native peoples, but recognises that “There is a need to respect the rights of peoples and cultures, and to appreciate that the development of a social group presupposes an historical process which takes place within a cultural context and demands the constant and active involvement of local people from within their proper culture.”

The pope’s letter to the faithful denounces pollution, the unsustainable exploitation of natural resources and an economic model that exacerbates inequality, stressing that “Nor can the notion of the quality of life be imposed from without, for quality of life must be understood within the world of symbols and customs proper to each human group.”

During Pope Francis’ first visit to Mexico, which began Friday Feb. 12 and ends Wednesday Feb. 17, some 80 indigenous representatives from 15 countries and delegates of civil society and academia met in San Cristóbal to discuss the connection between the encyclical and indigenous people’s causes. 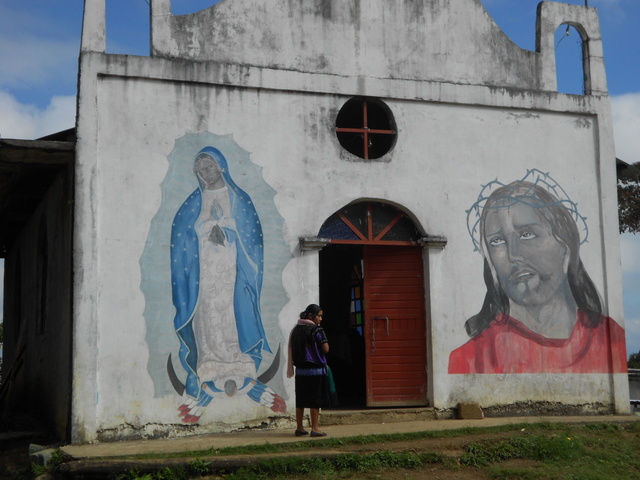 Native peoples identify with the “Laudato Si” encyclical, in the defence of their territories, culture and natural resources. An indigenous woman outside a Catholic church in the village of Acteal in the southern Mexican state of Chiapas. Credit: Emilio Godoy/IPS

Jorge Mario Bergoglio, who is from Argentina and adopted the name Pope Francis when he was elected in March 2013, reached out to indigenous people on his visit Monday to this city more than 900 km south of Mexico City, with a population of over 200,000, 66,000 of whom are indigenous according to official statistics.

Chiapas, one of Mexico’s poorest states, is home to 13 different indigenous groups representing a total of 1.32 million people out of the state’s total population of 5.1 million.

Thousands of indigenous people gathered Monday in a field where the pope presided over a mass in three native languages. He later had lunch with local bishops and representatives of indigenous communities.

The gathering was the first activity organised at the level of institutions to analyse Laudato Si and its link to the struggle of indigenous people. The participants discussed issues like the protection of native territory and natural resources, as well as the risks they face, such as climate change and the extractive industries.

The encyclical “has points in common with our agenda and our doctrine. It’s not just about defending indigenous peoples, but also about the Catholic Church defending a more just and environmentally sustainable society,” Jorge Pérez, president of the Regional Organisation of Indigenous Peoples of Eastern Peru, told IPS during the event.

There are 54 different indigenous peoples in Peru, who live on a combined total of 100,000 sq km of territory that they collectively own and another 100,000 to which they do not yet have legal title.

Peru’s native territories are threatened by the oil and mining industries, deforestation, and pollution.

Although indigenous organisations and their leaders are familiar with the encyclical, an ongoing task is bringing the content to native communities.

“We have been worried about how to generate a profound conversion in the communities, among the new generations, because it isn’t just about reading a document, but about living and preaching it, so we can be stronger, with a word of encouragement,” Pedro Gutiérrez of the Tzetzal indigenous community, a member of the non-government Institute of Intercultural Study and Research (INESIN), based in San Cristóbal, told IPS.

Mexico is the Latin American country with the largest indigenous population, which is variously estimated to make up between 11 and 30 percent of the country’s 120 million people (the smaller, official, estimate is based on the number of people who actually speak an indigenous language). They are divided among at least 54 different groups.

Here, as in the rest of Latin America, indigenous people face discrimination, marginalisation, and the pillage of their natural resources.

The native people at the gathering wanted Francis to hear their demands and express support for their cause, and bring the content of the encyclical to life and not just leave it as good intentions on paper, said the representatives of Latin American indigenous peoples meeting in the Chiapas capital.

“It touches the conscience of people who have not given importance to our struggle. That way we will have more arguments to reflect on with those who are not committed to respecting and caring for our territories,” Pravia said.

Pope Francis received a message from the participants in the gathering, with their reflections on the encyclical and the request that he back them in their struggles, as a direct manner of defending “our common home”.

“Our message is one of gratitude for referring to our rights, and because it reaches out to indigenous peoples; we hope it will be lasting and effective, with clearly defined goals and targets,” said Pérez, whose organisation belongs to the Interethnic Association for the Development of the Peruvian Rainforest (AIDESEP).