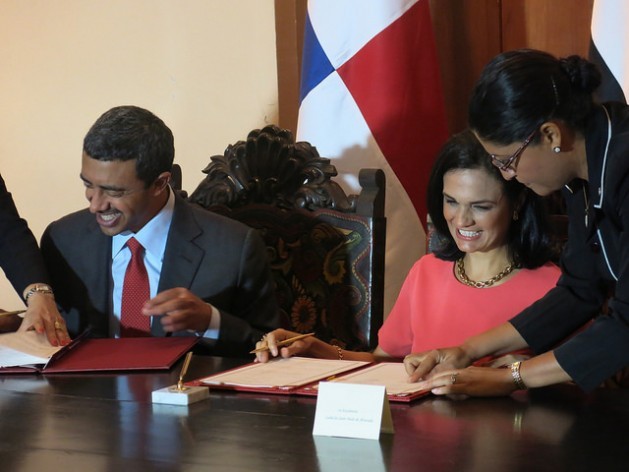 The United Arab Emirates foreign minister, Sheikh Abdullah bin Zayed Al Nahyan, and the vice president and foreign minister of Panama, Isabel de Saint Malo, smile as they sign an agreement for the creation of a Joint Cooperation Committee, at the end of their meeting in the Panamanian capital on Thursday Feb. 11. Credit: Guillermo Machado/IPS

The committee will serve as “the legal base for launching joint investment projects, including the participation of Emirati companies in the public tenders of this government’s five-year investment plan, especially in the areas of energy and shipping cooperation,” said the vice president and foreign minister of Panama, Isabel de Saint Malo.

Al Nahyan said the UAE is interested in getting involved in areas of common interest, such as banking, logistics, energy, airports and infrastructure.

In a joint press conference, the Emirati minister added that his country is not only interested in studying initiatives to carry out in Panama, but in pushing ahead with projects that would reach out to other markets from this Central American country.

As stated during the meeting, the new committee “will promote and coordinate programmes on the political, economic, trade, cultural, judicial, security, social, environment, tourism, technology and humanitarian aid fronts and in other areas of interest” to the two countries.

On Thursday Feb. 11, the Emirati minister visited Panama as part of a Latin America tour that took him to Argentina and Colombia and ends Friday Feb. 12 in Costa Rica.

Prior to the signing of the accord creating the committee, the two ministers held a private meeting in Panama’s foreign ministry, before presiding over a meeting with their delegations.

The UAE’s decision to open an embassy in Panama in 2017 was confirmed in the meetings, while this country will upgrade its consulate in the Gulf nation to embassy.

Al Nahyan’s visit was preceded, in November 2014, by a trip by Saint Malolto the UAE capital, Abu Dhabi, where she was received by Sheikh Mohamed bin Zayed Al Nahyan, crown prince of Abu Dhabi and commander of the UAE armed forces, and where ties between the two countries were strengthened.

That same year, negotiations began on three bilateral agreements: the elimination of the visa requirement, investment protection and aviation.

In this last area, an agreement was reached to create a direct flight between the Panamanian capital and the Emirati city of Dubai.

The Emirates airline route will begin to operate on Mar. 31 and is the longest in the world – nearly 18 hours, the company reported. Panama will be the first Central American country with a flight to Dubai, where the Emirates is the largest airline hub in the Middle East, with connections to Africa, Asia and Europe.

According to a statement by Panama’s foreign ministry, the air link between the two countries is important because “it opens the doors to innumerable economic, trade and cultural opportunities…and lays the foundation for the possible establishment of the headquarters of multinational companies.”

Vice President Saint Malo said there are important similarities between Panama and the UAE, especially in logistics and the shipping business, in foreign direct investment, and as countries that promote peace and stability.

“With the opening of the two embassies, not only will these projects quickly take shape, but it makes us gateways to Latin America and the Middle East, respectively,” she said.

Lawyer and international consultant Rodrigo Noriega also welcomed the boosting of relations between this Central American country and the rich Gulf nation, although he noted that the benefits will not be seen in the short term.

“This visit is very productive and strengthens Panama’s reputation as an open country that is not xenophobic and is not anti-Muslim,” he told IPS.

The expert described it as a “win-win” relationship, but one that will begin to give fruit in five, 10 or 20 years.

“We are taking the first steps towards interregional diplomacy with a bloc of countries with which we have not normally had ties,” he said.

In his view, the fact that the UAE is looking to Panama “indicates that there are questions of common interest, such as the expansion of the canal and of the Tocumen international airport, the logistics hub, the dollarised economy and the Colon free zone.”

“They see possibilities for investment and see us as a platform for their products and services, as a strategic ally in the region,” Noriega said.

Saint Malo took advantage of the meeting to present to her guest the Regional Logistics Centre for Humanitarian Assistance in Panama, an initiative “that benefits all of Latin America and the Caribbean and is aimed at addressing the effects of climate change.”

As her office stated, the logistics centre brings together the emergency operations of different agencies in one single location, at the Panama Pacific International Airport, some 20 minutes from the capital.

Al Nahyan, meanwhile, stressed that the UAE’s hub offers aid to Southeast Asia and Africa, among other regions, and that its experience could support Panama’s hub. “Our experts will be exchanging ideas and will provide support for the third phase of this Panamanian initiative,” he said.

Noriega said Panama could take into account successful aspects of the UAE, such as its great experience as a logistics, financial and energy hub, as well as its heavy spending on education.

“They have sent their people to study at the best universities in the world. Universities like Massachusetts, Harvard and Cambridge have campuses in the Emirates, because they want to stop being a country that only produces raw materials, like oil, to become a producer of knowledge,” the analyst said.

Noriega said Panama must stop thinking only as an “exporter of water through the canal” and start thinking as “a country that produces knowledge,” a lesson in which it has a lot to learn from the UAE, which the world has stopped seeing as a mere oil exporter.

Another important issue discussed in the bilateral dialogue was energy.

In response to a question from IPS in the press conference, the vice president said that with respect to energy, the delegations discussed the shared aim of diversifying the energy mix and boosting the production of clean energy, to explore areas of cooperation in the future.

Al Nahyan, for his part, said there are international initiatives in which Panama and the UAE could participate, that move away from the traditional development of oil and gas.