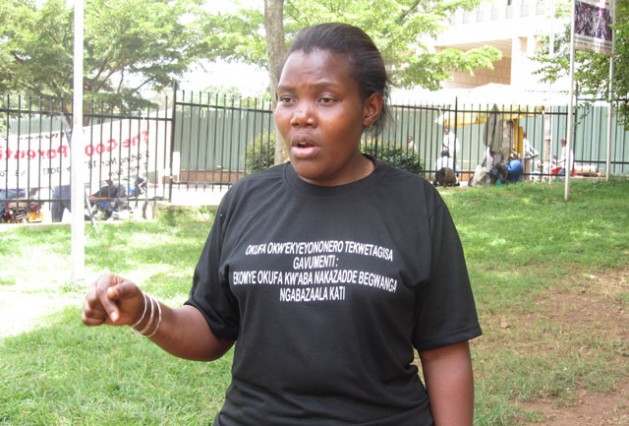 Rose Nakanjako, she is the Chairperson of Mama Clubs. Rose is HIV positive but she was lucky that she was not sterilised and both of her children were born HIV negative. Credit: Wambi Michael/IPS

KAMPALA, Uganda, Feb 18 2016 (IPS) - Mayimuna Monica* has been living with HIV for over 10 years and wants to have a baby. But she can’t because her uterus was removed against her will at a government hospital where she had gone to deliver her last child now aged eight. “My uterus was removed in 2007. When I got pregnant and went for medical check-up, the doctor asked me why I was pregnant. I told him I want to have a third child. The doctor said, you people living with HIV at times annoy us because you understand your situation but you come to disturb us.” Mayimuna narrates.

“I had the baby delivered through a caesarean operation. At that time I did not know they had removed my uterus. The time came when I wanted another baby. I waited for one or two years but did not conceive. I went to hospital to find out why. That was when they told me that my uterus was removed. I was hurt and wondered why the doctors did not inform me or give me an explanation. ” said Mayimuna.

Mayimuna is one of the women whose case was documented in the survey conducted by the International Community of Women living with HIV/AIDS Eastern Africa (ICWEA) under a campaign to improve the sexual reproductive health rights of one million young people affected by HIV across five countries in Africa and Asia. The survey was conducted in nine districts drawn from Uganda’s four administrative regions. It surveyed 744 women living with HIV and was the first of its kind to document alleged cases of forced sterilisation. ICWEA and other groups have documented about 50 cases of coerced sterilisation in Kenya.

Dorothy Namutamba, of the ICWEA told IPS of the 72 reported sterilisations, 20 women had been coerced or forced to undergo the irreversible operation. “Most cases occurred in government hospitals during childbirth when the woman got a C-section. The average age at which sterilisation took place was 29 years. Eleven women were forced to undergo sterilisation. Health workers had failed to inform them properly about the procedure. They didn’t sign a consent form. Some of them only found out years later when they failed to conceive,” she said.

According to her, nine women were coerced to undergo sterilisation. “In these cases mothers were misinformed. For example, they understood that the procedure would be reversible: ‘tied’ tubes could be ‘untied’ later on. Or health workers convinced them that sterilisation would be the best option regarding their health,” she explained. The most common and significant effects of coerced or forced sterilisation include psycho-social (trauma), loss of female identity, abandonment by spouses and gender-based violence due to the inability to conceive children. “A number of the women reported social isolation – inability to fit in the community and family. The demands from husbands for more children greatly impacted on their social wellbeing.” Namutamba told IPS

Lillian Mworeko, the Executive Director of ICWEA told IPS that some of those sterilisation were as recent as 2014 and that most of the cases happened when the affected mothers were undergoing caesarean births. She said women living with HIV in Uganda experience a wide range of sexual and reproductive rights violations, ranging from misinformation regarding their sexual reproductive health and rights, mistreatment during the process of seeking reproductive health services from health facilities and coerced or forced sterilisation.

She felt that further research was needed to find out why health workers were coercing or forcing mothers into sterilisation: “Our interest was mainly on women living with HIV. But from what we found out, it seems like forced sterilisation is a widespread practice with incentives to health workers. The community mobilisation for these long-term methods is so high and supported by some organisations. It is like bring women, let them be sterilised and the health worker gets money.”

Women living with HIV in Uganda were being coerced or forced to undergo sterilisation despite scientific advances that have seen HIV positive women delivering children who are HIV negative, adding that the government has not moved proactively to review some of its policies on HIV management and care. “We cannot continue working under the policies designed at the time when we did not have treatment. We must move with science with evidence. If we are saying that women can have babies who are HIV negative, what are our policies saying? Because the health worker still knows that since this woman is HIV positive, the only solution is to make her stop giving birth so that we stop having babies who are HIV positive.” Mworeko told IPS.

Babirye Joy*is another victim of coerced or forced sterilisation. She was 23 years in 2010 when the health worker connived with her sisters to have undergone permanent birth control method. “My sister took me to the doctor when I was due to give birth. I did not request sterilisation but my sister told me the doctor recommended it. I was not given any information about the procedure and I did not have an opportunity to ask any questions. I found out later what was done to me when I went to Joint Clinical Research Centre for a check-up; the machine showed that my fallopian tubes were cut. I had not been told and did not sign a consent form.” She said.

Dr. John Baptist Wanyayi, the Health officer of Mbale District, one of the district where the survey was conducted told IPS that sterilisation of women under the existing policies could only take place with the consent of the woman or couple. “In most cases the doctors consider the dangers that the expectant mother is going through during that period which may have been the driving factor for those sterilisations at that stage. Because you fear that the next pregnancy might be dangerous to this mother and probably the HIV status was not the overriding factor.” Said Wanyayi Wanyayi told IPS that during antenatal, women may go through the consent process and consent to permanent birth control method but they later turn around after some time when they feel like having another child.He said findings of the survey bring into focus the contradictions between the HIV management and care policies and the family planning programming in Uganda.

Uganda in the early 2000 developed policies with a four-prong approach aimed at promoting the prevention of mother-to-child transmission of HIV (PMTCT). The second prong aimed at preventing unwanted pregnancies in women living with HIV because many of the children who were born to HIV positive women were being born positive. Health workers aimed at bringing down the number of children who were being born positive. Uganda has since moved from PMTCT and now focuses on elimination of mother to child transmission of HIV (EMTCT) after a successful PMTCT campaign.

Dr. Patrick Tusiime, the District Health Officer of another district where the survey was conducted told IPS that forced or coerced sterilisation was a gross violation of the mother’s reproductive health rights: “Many of these are individual actions. But we need to engage midwives and bring them to order. Because when we are being trained at medical school whether nurses or doctors, we are not told to go and sterilise people against their consent.” The survey recommended that tubal legation protocols need to be developed and should be communicated during antenatal clinic visits. It urged for the training of health workers in offering professional care without violating women’s rights, ensuring that informed consent processes are of high quality.