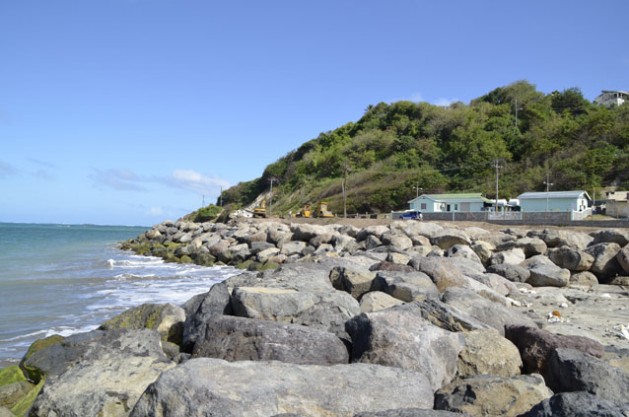 UNITED NATIONS, Feb 2 2016 (IPS) - The world is still celebrating the Paris Agreement on Climate Change, the main outcome of the 21st Conference of the Parties of the United Nations Framework Convention on Climate Change. Its ambitions are unprecedented: not only has the world committed to limit the increase of temperature to “well below 2°C above pre-industrial levels,” it has also agreed to pursue efforts to “limit the temperature increase to 1.5 °C.”

This achievement should be celebrated, especially by Small Island Development States (SIDS), a 41-nation group—nearly half of them in the Caribbean—that has been advocating for increased ambition on climate change for nearly a quarter century.

SIDS are even more vulnerable to climate change impacts —and risk losing more. Global warming has very high associated damages and costs to families, communities and entire countries, including their Gross Domestic Product (GDP) according to the Intergovernmental Panel on Climate Change.

What does this mean for the Caribbean? Climate change is recognised as one of the most serious challenges to the Caribbean. With the likelihood that climate change will exacerbate the frequency and intensity of the yearly hurricane season, comprehensive measures are needed to protect at-risk communities.

Moreover, scenarios based on moderate curbing of greenhouse gas emissions reveal that surface temperature would increase between 1.2 and 2.3 °C across the Caribbean in this century. In turn, rainfall is expected to decrease about 5 to 6 percent. As a result, it will be the only insular region in the world to experience a decrease in water availability in the future.

The combined impact of higher temperatures and less water would likely result in longer dry periods and increased frequency of droughts, which threaten agriculture, livelihoods, sanitation and ecosystems.

Perhaps the most dangerous hazard is sea level rise. The sea level may rise up to 0.6 meters in the Caribbean by the end of the century, according to the Intergovernmental Panel on Climate Change. This could actually flood low-lying areas, posing huge threats, particularly to the smallest islands, and impacting human settlements and infrastructure in coastal zones. It also poses serious threats to tourism, a crucial sector for Caribbean economies: up to 60 percent of current resorts lie around the coast and these would be greatly damaged by sea level increase.

In light of these prospects, adapting to climate change becomes an urgent necessity for SIDS—including in the Caribbean. It is therefore not surprising that all Caribbean countries have submitted a section on adaptation within their Intended Nationally Determined Contributions (INDCs), which are the voluntary commitments that pave the way for the implementation of the Paris Agreement.

In their INDCs, Caribbean countries overwhelmingly highlight the conservation of water resources and the protection of coastal areas as their main worries. Most of them also consider adaptation initiatives in the economic and productive sectors, mainly agriculture, fisheries, tourism and forestry.

The United Nations Development Programme (UNDP) has been supporting Caribbean countries in their adaptation efforts for many years now, through environmental, energy-related and risk reduction projects, among others.

This week we launched a new partnership with the Government of Japan, the US$15 million Japan-Caribbean Climate Change Partnership (J-CCCP), in line with the Paris Agreement on Climate Change. The initiative will be implemented in eight Caribbean countries: Belize, Dominica, Grenada, Guyana, Jamaica, Saint Lucia, Saint Vincent and the Grenadines, Suriname, benefitting an estimated 200,000 women and men in 50 communities.

It will set out a roadmap to mitigate and adapt to climate change, in line with countries’ long-term strategies, helping put in practice Caribbean countries’ actions and policies to reduce greenhouse as emissions and adapt to climate change. It will also boost access to sustainable energy and help reduce fossil fuel imports and dependence, setting the region on a low-emission development path, while addressing critical balance of payments constraints.

When considering adaptation measures to the different impacts of climate change there are multiple options. Some rely on infrastructure, such as dikes to control sea level rise, but this can be particularly expensive for SIDS, where the ratio of coastal area to land mass is very high.

In this context, ecosystem-based adaptation activities are much more cost-effective, and, in countries with diverse developmental priorities and where financial resources are limited, they become an attractive alternative. This means healthy, well-functioning ecosystems to boost natural resilience to the adverse impacts of climate change, reducing people’s vulnerabilities as well.

UNDP, in partnership with national and local governments in the Caribbean, has been championing ecosystem-based adaptation and risk reduction with very rewarding results.

For example, the Government of Cuba partnered with UNDP, scientific institutes and forestry enterprises to restore mangrove forests along 84 km of the country’s southern shore to slow down saline intrusion from the sea level rise and reduce disaster risks, as the mangrove acts as a protective barrier against hurricanes.

In Grenada, in coordination with the Government and the German International Cooperation Agency, we supported the establishment of a Community Climate Change Adaptation Fund, a small grants mechanism, to provide opportunities to communities to cope with the effects of climate change and extreme weather conditions. We have engaged with local stakeholders to develop climate smart agricultural projects, and climate resilient fisheries, among other activities in the tourism and water resources sectors.

UNDP’s support is directed to balance social and economic development with environmental protection, directly benefitting communities. Our approach is necessarily aligned with the recently approved 2030 Sustainable Development Agenda and its associated Sustainable Development Goals, delivering on protecting ecosystems and natural resources, promoting food security and sanitation, while also helping reduce poverty and promoting sustainable economic growth.
While there is significant potential for climate change adaptation in SIDS, it will require additional external resources, technologies and strengthening of local capacities. In UNDP we are ideally placed to continue working hand-in-hand with Caribbean countries as they implement their INDCs and find their own solutions to climate-change adaptation, while also sharing knowledge and experiences within the region and beyond.