This is the second of a two-article series on the soy industry in Paraguay. 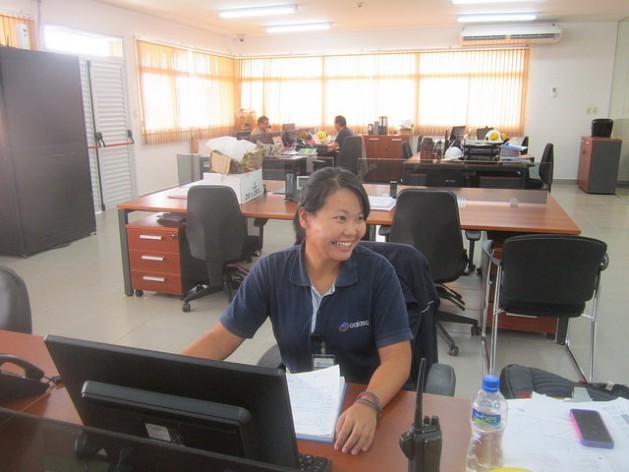 Chemical engineer Negumi Kosaka has been training for over a year, learning to manage each stage of the production of soybean oil and soymeal in the Angostura Agroindustrial Complex (CAIASA) in the industrial park in Villeta, Paraguay. Her parents, Japanese immigrants, grow soybeans in another region in this country, which is taking steps towards industrialisation with projects like this one. Credit: Mario Osava/IPS

VILLETA, Paraguay , Mar 26 2016 (IPS) - “I worked in many companies, in construction, fertilisers, chemicals, but none of them were as good as this one,” said Dario Cardozo, who works in the Angostura Agroindustrial Complex (CAIASA) grain reception facility.

The way he is treated by the owners and managers – “very educated people” – the better wages and the good working environment are the advantages stressed by the 32-year-old father of two – a veteran among the young people who work with him receiving and monitoring the trucks that come from the Paraguayan countryside laden with soybeans to be turned into oil and soymeal.

“We’re the face of CAIASA,” he told IPS, describing his job at the entrance to the complex, the biggest soybean crushing plant in Paraguay. Keeping things moving quickly as 500 trucks – the average traffic during harvest season – a day come in to unload their cargo is an important task, he said, because “for truckers, time is gold.”

Hired by the company after the plant began to operate in 2013 in Angostura, he has been able to build a house in a new neighbourhood of Villeta, where the plant is located in the industrial park on the banks of the Paraguay river. The home is modest, and unfinished: it still needs plaster and paint.

“We used to live with my father-in-law, but he died,” said Cardozo’s wife Lourdes Ramírez, who is happy about the health insurance and other benefits offered by CAIASA. “The bus brings my husband to the two-lane avenue” a few hundreds of metres away, “but when it rains they drive him all the way home,” she said, standing in front of her house.

Local shopkeeper Marina Cáceres, the owner of the La Carapegueña 2 Supermarket, told IPS that “My sales have gone up, there’s more money in the city in the past couple of years; in this block alone there are three CAIASA employees.” The La Carapegueña 1 Supermarket, “which belongs to my father-in-law”, is at the entrance to the city, she said.

Villeta, 45 km from Asunción, is still mainly a rural municipality. Half of its estimated 40,000 inhabitants still live in the countryside, Mayor Teodosio Gómez told IPS.

But the arrival of dozens of industrial companies, which have invested a combined total of 800 million dollars here in the last five years, is changing the landscape and living standards in this municipality in Paraguay’s Central department. 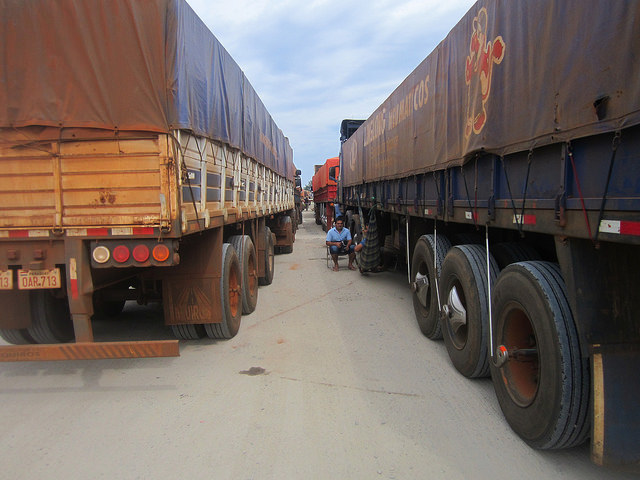 Two truck drivers rest while waiting to unload their cargo in the Angostura Agroindustrial Complex (CAIASA) soy crushing plant in Paraguay. Some 2,000 trucks haul soybeans to the plant, which receives an average of 500 trucks a day during the peak harvest season, and where it takes less than a day to unload even during the busiest periods. Credit: Mario Osava/IPS

Besides CAIASA, which is a joint venture between two global agribusiness giants, the U.S. Bunge and France’s Louis Dreyfus, another U.S.-based food corporation, ADM, has also set up an agroindustrial plant in the municipality, which is attractive because of its location where the Paraguay river narrows and deepens enough to handle large barges with a cargo capacity of over 2,000 tons.

The result is “low unemployment and violent crime levels,” said the mayor. Besides creating direct jobs, the industries have generated a market for different services and locally produced foods.

The town, founded in 1714 around a river port, where mainly oranges were shipped out, is now at the centre of a diversified economy which includes stockbreeders and small farmers, and is becoming “the industrial capital of Paraguay,” said Gómez.

A skilled local workforce is taking shape through training, of workers, technicians and managers, to prepare them to work in the new industrial plants.

Megumi Kosaka, a 28-year-old chemical engineer, has been in training for the past 15 months, learning to manage any sector of CAIASA, from the reception of soybeans, quality control, the furnace and water treatment to the production of soymeal, oil, and soybean husk pellets.

She is learning all of this “in theory and in practice,” sometimes filling in for the manager of a section for several days or weeks. “For me it’s great – I see all of the operations, I learn everything, I have the chance to work with a wide range of professionals,” she told IPS.

Her favourite area, however, is production. “The machines are like living things, which with small differences in what we do produce something different, in terms of the quality of the sub-product,” Kosaka said.

“If we dry them too much, the soybeans crack, they don’t produce as much oil as possible; you have to know the exact level of moisture…it’s interesting to see the changes, what works best,” she said. 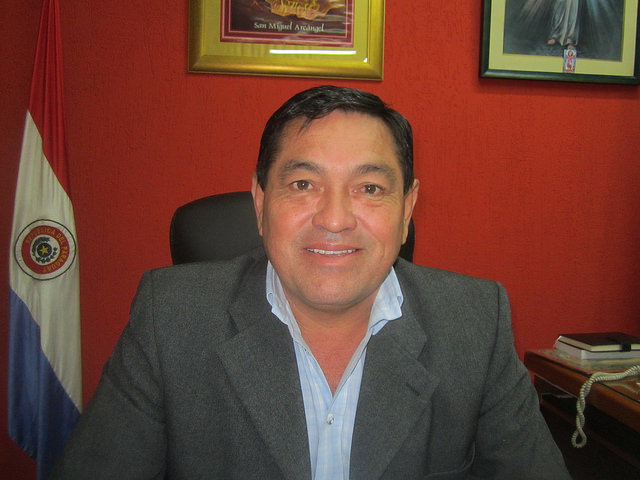 Villeta Mayor Teodosio Gómez, seen here in his office, says his municipality will be the industrial capital of Paraguay, thanks to its location on the Paraguay river and its flourishing industrial park, just 45 km from Asunción. Credit: Mario Osava/IPS

The daughter of Japanese immigrants, Kosaka already worked in a small soy crushing plant. “In a big one like CAIASA they pay me a better salary to learn more; later I’ll pay them back for what I learned, with my work.”

Her long-term dream is to open a factory in Colonia Iguazú, where her parents and 200 other Japanese families live, in southeast Paraguay, near the border with Brazil. Like 90 percent of the country’s soy producers, farmers there grow soy but do not process it.

A crushing plant would generate skilled jobs and would make it possible for young people who study to stay in the area. Today, with no chance of finding a decent job, “they leave,” Kosaka said.

“The question of human resources is extremely important in Paraguay, and CAIASA made an intelligent decision to train local people, which is a slow process,” said Julio Fleck, head of production in CAIASA, who was in charge of selecting workers and technicians for training, to form a payroll of 200 people.

Workers from other fields, people from the world of business and trade, and some local mechanics and electricians were selected. “We sent them to Argentina for training,” said Fleck, who was involved in the construction of the complex since 2012.

“I come from a different school,” he told IPS, referring to his previous job in the Colonias Unidas Cooperative in southern Paraguay, which is dedicated to diversified agriculture and has a small factory that produces cooking oil from different raw materials.

In CAIASA, he said, he found the “focus” he was seeking, “the big industry where I can learn more in-depth know-how,” to reach maximum productivity. “The good thing in CAIASA is that it offers an opportunity for improvement in a modern, new industry with a high level of mechanisation. But it requires the setting of priorities among the many fronts that must be attended.” 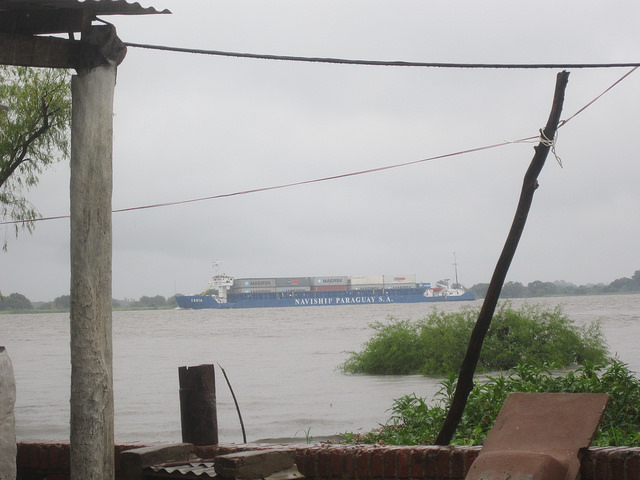 A barge makes its way down the Paraguay river, one of South America’s most important rivers, past the town of Villeta, which has several public and private ports and an industrial park that has become the hub of agroindustry in Paraguay, focused on processing soy, of which this small country is one of the world’s leading exporters. Credit: Mario Osava/IPS

One priority was the fuel to fire the furnace. The fact that there is little demand in Paraguay for soybean husk pellets, a sub-product of soy, and that they are not export quality, helped lead to their choice as a fuel, since the idea was to avoid the use of fossil fuels.

But the excess ashes generated by the burning of the pellets hurt the productivity of the furnace, driving up maintenance costs. For this reason, wood chips continued to be used as well, a sustainable option, since the companies that provide them are certified as deforestation-free.

The challenge is how to boost the productivity of the furnace with these two raw materials, said Fleck, a 44-year-old chemical engineer who described himself as obsessed with competitiveness. Logistics, for example, affects Paraguayan soy and its by-products in terms of competition with neighbouring Argentina, which is closer to the markets abroad.

As Paraguay is surrounded by two giant soybean producers, Argentina and Brazil, the expansion of CAIASA depends on what those competitors do, he said.

The truckers, who make up the biggest group of workers among those linked to CAIASA, say the company brought them better pay in the past, but that this has changed since global soy prices plunged.

“I used to earn between eight and nine million guaranis (between 1,400 and 1600 dollars) a month; now I’m earning just 3,500 (615 dollars),” complained Mario Ortellano in the CAIASA parking lot, while waiting to unload the soybeans in his truck.

But the alternative for this 41-year-old who has driven a truck for 13 years is to return to his hometown of Villa Rica, 160 km from Asunción, and to a job as a machine and forklift operator, earning just the minimum wage, 315 dollars a month.