This is the first of two articles on the soy agribusiness in Paraguay. 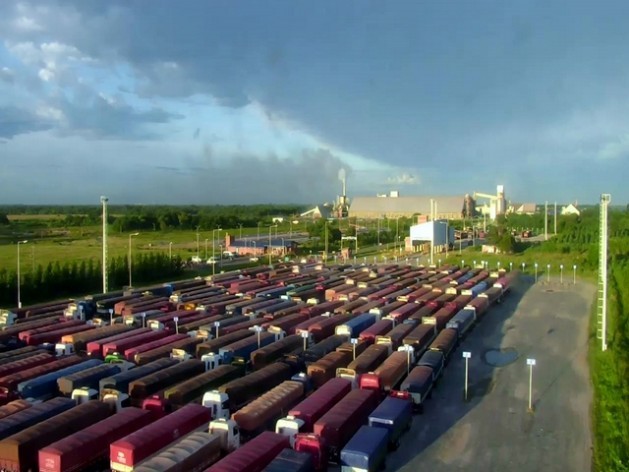 The packed truck parking lot at the Angostura Agroindustrial Complex SA (CAIASA), where an average of 500 trucks a day arrive, bringing in soybeans from Paraguay’s fields. The soy crushing plant, which began to operate in 2013 in the municipality of Villeta, is an important part of the country’s industrialisation process. Credit: Courtesy of CAIASA

It is the biggest soybean crushing plant in Paraguay. This South American country’s economy is almost completely dependent on agricultural exports, principally soy and beef, but it recently began to process soybeans on a large scale and export soybean oil and other by-products, while providing incentives to stimulate other industries.

Since CAIASA began operating on the banks of the Paraguay river in May 2013, nearly half of all soybeans produced in the country – expected to total 8.8 million tons this year – are crushed, according to estimates by the United States Department of Agriculture.

Paraguay is the world’s fourth largest exporter and sixth largest producer of soy. This small landlocked country of less than seven million people is only surpassed in soybean production by giants like the United States, Brazil, Argentina, China and India – and the last two just in production, not exports.

Soybeans are thus the pillar of the Paraguayan economy, and the plants that now process them offer skilled jobs.

Some of the workers in CAIASA were trained in neighbouring Argentina.

The state-of-the-art technology used in the soybean processing industry does not require much labour power. In fact, there are only 200 direct employees working in CAIASA. But the plant also generates around 2,500 indirect jobs, mainly in transport and maintenance services, said Puente. 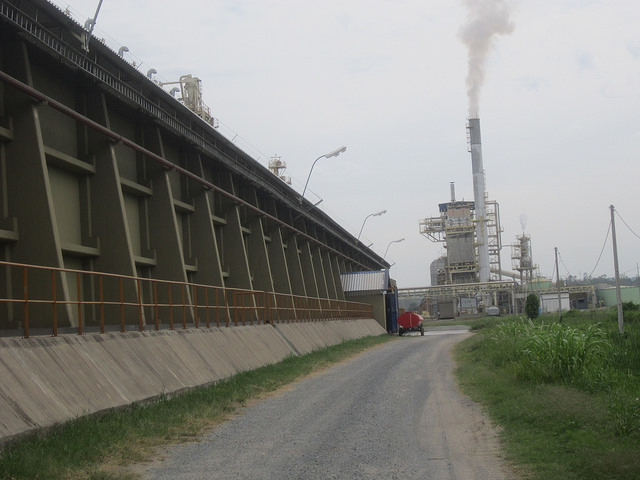 One side of the Angostura Agroindustrial Complex SA (CAIASA) storage facility, with the central plant visible in the background. The steam released by the furnace is the only smoke seen in this soy crushing plant, which does not use fossil fuels and generates virtually no waste products, on the banks of the Paraguay river in the municipality of Villeta, Paraguay. Credit: Mario Osava/IPS

“CAIASA is a blessing,” one trucker, Victor Villamayor, told IPS, as his colleague Martin Echauri nodded in agreement. “Everything here goes fast, it takes less than 24 hours to unload, whereas in the most disorganised ports we lose four or five days waiting to unload.”

Their huge trucks, which can haul up to 30 tons of soybeans, were parked in the company’s parking lot, which was not as full as during the peak of the harvest season, in January and February.

CAIASA also stands out for another reason: it has brought industry rivals together. “Big competitors in the global agricultural products market – Bunge (from the U.S.) and (France’s) Louis Dreyfus – joined forces, seeking economies of scale and reduction of costs,” said Puente.

The plant, which cost 200 million dollars to build, partially financed by the Inter-American Development Bank (IDB) and the OPEC (Organisation of the Petroleum Exporting Countries) Fund for International Development (OFID), can process 4.5 tons a day of soybeans and operates 330 days a year, closing one month for maintenance.

Other transnational commodities giants, such as the U.S.-based Cargill and ADM, have also set up (smaller) soybean crushing plants in Paraguay, further boosting agroindustrial development in this small Southern Cone country. 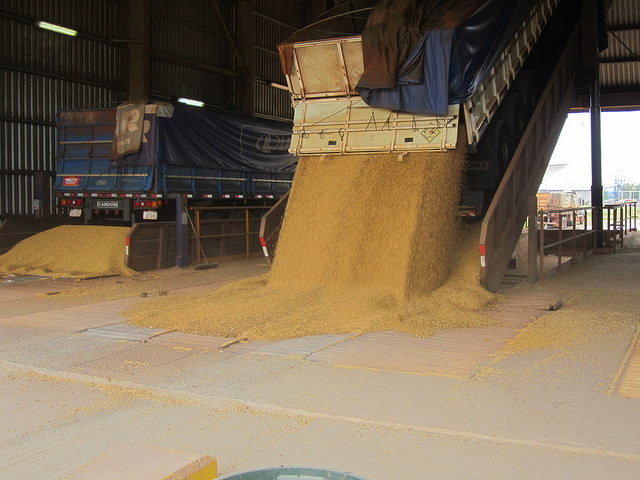 Trucks unload soybeans in the Angostura Agroindustrial Complex SA (CAIASA). This is the start of the soybeans’ journey through the plant, where they are turned into soymeal or soybean oil, which are exported on barges along the Paraguay river, from the industrial park in Villeta, Paraguay. Credit: Mario Osava/IPS

The CAIASA plant occupies one-third of the 136-hectare industrial park in the municipality of Villeta, 45 km from Asunción in the eastern department of Central. It was built with the possibility of expansion, although it faces “a latent risk,” Puente said.

“Argentina, which has idle capacity in its agroindustrial sector, can decide to temporarily allow imports of soy from Paraguay and export the by-products,” he said.

This could aggravate the shortage of raw materials in Paraguay in years of low production, he warned.

“Paraguay’s soy has a higher protein content than Argentina’s, because of the better soil and the more abundant sunshine, which increases the photosynthesis,” and this makes soybeans from this country attractive to Argentina, he said.

Buying soybeans from Bolivia and from western Brazil – grown along the banks of the Paraguay river, which forms part of the border between Paraguay and Brazil – is a possible alternative in the future.

“CAIASA is strategically located, an average of 250 km away from Paraguay’s soybean fields and along the waterway that can transport soybeans from the north at a low cost,” said Puente. 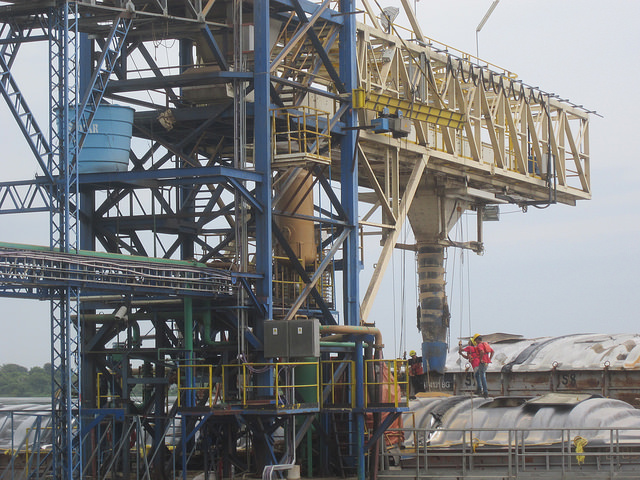 A barge is loaded with soymeal on the Angostura Agroindustrial Complex SA (CAIASA) dock, before heading down the Paraguay river to the Argentine river port of Rosario, 1,200 km to the south, where it is exported to different continents. The soy crushing plant, which uses state-of-the-art technology, began to operate in 2013 in the industrial park in Villeta, Paraguay. Credit: Mario Osava/IPS

The plant is called Angostura for the name of the rural area where it is located, right where the Paraguay river narrows (becomes “angosto”) and deepens.

From that point on, large barges can go downstream, to the Argentine inland port city of Rosario, 1,200 km to the south, which is accessible to ocean-going vessels. Upriver, towards Brazil and Bolivia, it’s a different story. Navigation is difficult during the dry season, making it necessary to haul lighter loads.

Improving this would require, however, dredging and the removal of rocks – interventions that would have “major impacts on wetlands, reducing them by speeding up the water flow in the river,” the head of the local environmental group Sobrevivencia (Survival), Elías Díaz Peña, told IPS.

These issues affect CAIASA, but addressing them would be up to the transnational corporations that own the plant, which are responsible for the purchases of raw materials and the export of the final products.

The work of the agribusiness corporations begins when the trucks laden with soybeans arrive and ends when the barges anchored at the docks are filled with soymeal and soybean oil, Vuyk said.

Between these two points, the soybeans are transported more than one kilometre as they go through quality control, storage, preparation and crushing, before they are turned into the final export products that are transported through pipes to the loading dock. 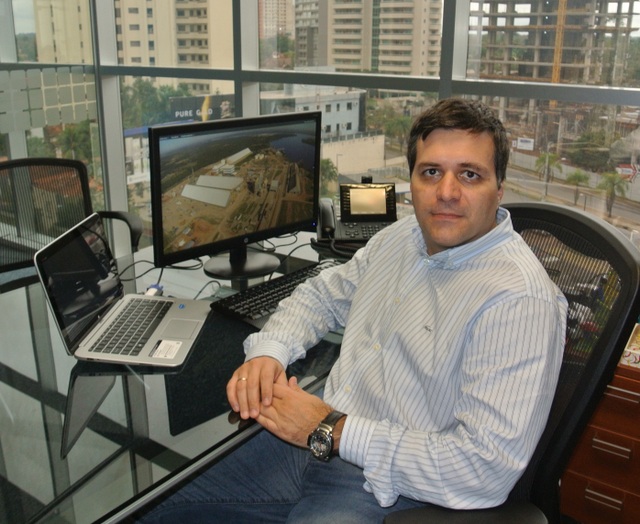 Diego Puente, general manager of the Angostura Agroindustrial Complex SA (CAIASA), in his office in Asunción, the capital of Paraguay, 45 km from the soy crushing plant in the industrial park in Villeta, on the banks of the Paraguay river. Credit: Courtesy of CAIASA

The complex can store up to 300,000 tons and one-third more in temporary open-air silos.

Of the soybeans, 72 percent are turned into soymeal, 20 percent into oil, and 5.5 percent into soybean meal pellets. The rest is water, the industrial manager said.

The pellets are used as livestock feed, but CAIASA decided to use them as fuel in its steam furnace, mixed with sawdust from a company that is certified as deforestation-free.

This means CAIASA is free of fossil fuels that are generally used by such plants, making the Angostura complex a model of new technologies and clean development.

By caring for the environment, even beyond the legal limits set by Paraguay, “we are protecting the image of our companies while living up to the standards set by the IDB (Inter-American Development Bank),” said Vuyk, a chemical engineer. 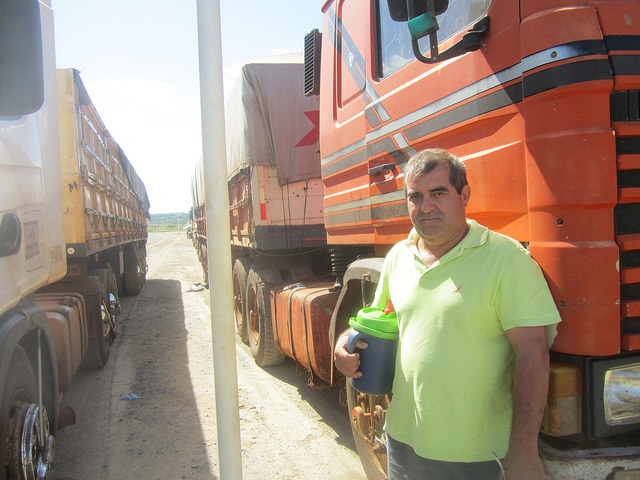 Martin Echauri says the Angostura Agroindustrial Complex SA (CAIASA) is “a blessing” because of how quickly he and his fellow truckers manage to unload the soybeans they haul in to the plant, which receives an average of 500 trucks a day during harvest time in Angostura, in the industrial park in Villeta, Paraguay. While they wait, Echauri and other truckers drink “yerba mate”, a caffeinated herbal brew that is popular in Paraguay, Argentina, Uruguay and southern Brazil, which they drink in a special thermos. Credit: Mario Osava/IPS

“CAIASA is one of the best, of the 73 industrial firms that have set up shop in Villeta, most of them in the last five years,” the town’s mayor, Teodosio Gómez, told IPS.

The municipality, which covers 975 sq km in the east of the country and is 70 km from the banks of the Paraguay river, is becoming “the country’s most important industrial development zone,” he said enthusiastically.

Besides several agribusiness companies, including ADM, there are chemical industries and the Tsuneishi Paraguay shipbuilding company, a branch of a Japanese firm, which builds the barges that transport the country’s agricultural products.

Paraguayans are proud of having the third-largest barge fleet in the world.

A policy providing guarantees for investment is key to attracting companies to Villeta, the mayor said. He also cited other factors, like “the river being navigable all the time, without setbacks,” good roads, the proximity of Asunción, and the abundant electric power provided by the giant Itaipú hydropower dam shared by Brazil and Paraguay.