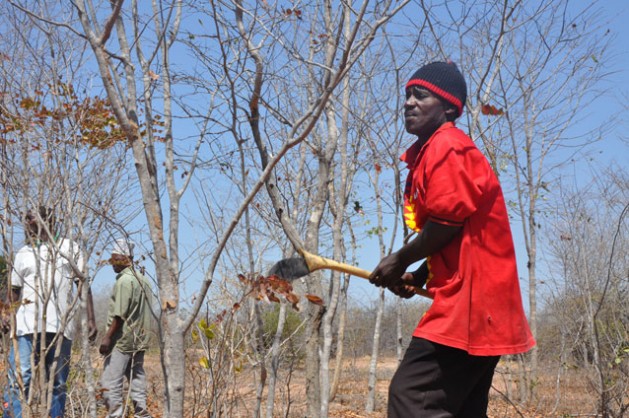 Standing between two acacia trees, frequently scratching his white-patched hair, Lukaro is buoyant, however: “some four decades ago, this land used to be green. We used to witness abundant rains. But human activities have continuously caused desertification here,” he told IPS.

A village elder in Olosiro recalls the year 2000 when drought caused livestock death and humans suffered from hunger. He says last year while other farmers were facing the brunt of no rains, he had fewer problems as humidity stayed longer on his fields.

Since 2013, Lukaro has practiced Farmer Managed Natural Regeneration (FMNR), a model in which tree wildlings are protected and stumps coppice-pruned so they rapidly grow or re-grow into trees. As opposed to the conventional wisdom in which trees are believed to compete with crops, FMNR has increased harvests for Lukaro.

He is an active member of Oljorai FMNR group, started with the help of training offered by World Vision Kenya (WV), an international Christian humanitarian aid organisation, which helps vulnerable populations across Kenya.

Lukaro is sure he knows how trees boosted his crops: they reduce the wind that blows away topsoil and provide shade to livestock, who drop manure and urine. Tree-leaf litter form humus, adding organic matter to the earth.

“I incorporate crops and trees in my farm. Before embracing FMNR, three years ago, I used to harvest eight bags of maize and one bag of beans. But last year, my harvest has shot up to 25 bags of maize,” says Lukaro, whose fields contrast with the bare, bleak ones of his neighbour, who has neatly burnt the residue from last year’s harvest and hacked away all the regenerating stumps, the key to FMNR.

Caroline Njiru, FMNR project manager Kenya, says the initiative began in June 2013 where the organisation trained a couple of farmers as champions by instilling the concept in them and they would later train other farmers.

“We have also been engaging government officials mostly in agriculture and environment where we also train them as champions of the concept because FMNR complements so much government’s policy of improving the vegetative forest cover on the farms,” told an interview with IPS.

Considering that most Kenyan farmers use fuel wood as a source of energy, with FMNR, the farmers can now get the fuel wood near their homes. Some have turned it into an income generating activity by selling the fuel wood from pruned branches or by burning charcoal.

WV implemented the FMNR initiative in selected ASAL areas, in which tree planting has been challenging their survival rates. But FMNR has proved to be successful because it favours the growth of the indigenous species, which are very resilient in these areas in cases of drought where they still survive.

“Water table in this area has risen. People used to trek for over 10km in search of water to an extent we had resorted to using ones in water pans, which were muddy. But now, analysis done indicates that water table in Olosirwa borehole has risen from the previous 10,000 litres a day to 30,000 litres a day,” says Lukaro.

Caroline Njiru, says the initiative has impacted positively on the lives of the beneficiaries, with the biggest transformation being the benefits trickling down to improve the well-being of the child. It has also promoted food and nutrition security.

In neighbouring Tanzania, FMNR is improving lifestyles in families that have reaped the benefits of the FMNR initiative. Ramadhan Saidi, treasurer of Tamatamu Semfuru Bee Keeping group in Singinda North in Tanzania attests to this. Like their Kenyan counterpart, they also relied on one crop, which became a victim to harsh weather on several occasions, driving the families into hunger with malnourished children.

However, Saidi says with FMNR practices, the families now have a balanced diet and a steady income hence translating to better life. Currently, Saidi’s Tamutamu Semfuru group is the leading producer of pure and quality honey in Tanzania, and intends to market its honey outside the country.

“Honey here was used for brewing local alcohol. But after we received training on commercialising it, WV Tanzania gave us 172 modern bee hives which in addition to our own hives made it a total of 377,” he told this interview.

In the middle of a land that once was grassless, Chamkama village of Nakasongore village in Uganda, Stephen Tumhaire, holds a rake made of stick points as his cows graze beneath the tree sheds. Tumhaire told IPS that the forest cover was destroyed and now the cows rarely provide 5 litres of milk per cow. WV then came in and trained us on the importance of letting trees regrow.

Florence Namembwa, a mother of two, also a resident of Chamkama village, has earned a living from engaging in FMNR activities. She has helped a couple of women embrace this initiative. The Australian government injected some USD $1.5 million to FMNR initiative in Kenya, Tanzania, Uganda and Rwanda, leveraging a further USD $4.1 million from the Australian community more broadly.

“The Australian government is delighted to be working with WV in this area. It is one of our most trusted NGO across the globe,” says John Feakes, Australian High Commissioner to Kenya in an interview.

Feakes elaborated that the programme in East Africa has supported some 160,000 farmers, of which 60,000 are women. The time spent by women and children in foraging for firewood has been reduced.

Tony Reunando, WVAustralia’s natural resource advisor and the man behind the FMNR initiative, told this writer in an interview that in a low input-agricultural situation like in East Africa, where farmers cannot afford fertilisers, trees complement this. As a perfect tool to combat climate change, Reunando called for practical action bringing together government’s agents and other stakeholders.