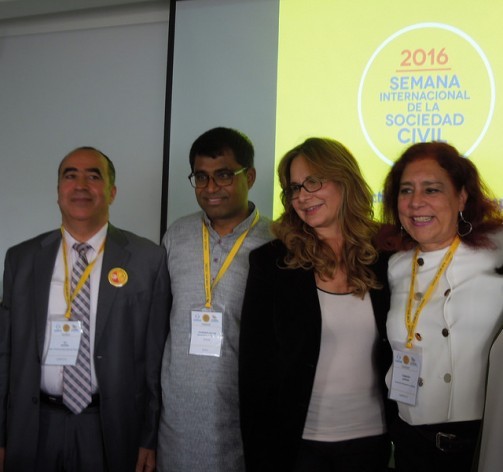 Tunisian 2015 Peace Prize-winner Ali Zeddini (left), next to Sri Lankan activist Danny Sriskandarajah, secretary general of Civicus, and two other participants in the International Civil Society Week, hosted by Bogotá from Apr. 25-28, with the participation of 900 activists from more than 100 countries. Credit: Constanza Vieira/IPS

BOGOTA, Apr 26 2016 (IPS) - Collusion, according to the dictionary, means “secret or illegal cooperation or conspiracy, especially in order to cheat or deceive others.” That is what the world’s political and economic elites engage in, according to Danny Sriskandarajah, secretary general of the international civil society alliance CIVICUS.

The reason for this is that they are afraid of dissent, the activist from Sri Lanka said Monday, Apr. 25, the first day of the International Civil Society Week 2016 which has drawn 900 civil society delegates from all continents to the Colombian capital.

This is the first time the biannual CIVICUS event is being held in Latin America.

In Sriskandarajah’s view, this is the reason that protests by young people in every region of the world are cracked down on by the police, often brutally.

He also said this is why civil society organisations are facing a global crisis, with governments that seek to impose their policies.

To do so, more governments are making overseas funding of civil society organisations illegal, while at the same time stepping up state surveillance of their online activities, due to fear of the power of civil society and the social networks to mobilise citizens to protest.

To this is added intimidation and repression which, in many cases, are curbing people’s ability to fight for a broad range of human rights.

Fundamental freedoms are under attack, said organisers and delegates.

CIVICUS tracks threats to basic freedoms of speech, expression and association in over 100 countries. In 2015, it counted 156 murders of human rights defenders worldwide.

Last year, half of the rights violations documented by CIVICUS happened in Latin America, where human rights defenders were the main targets. The most dangerous country was Colombia.

During more than three years of peace talks between the Colombian government and the FARC guerrillas, over 500 community organisers and activists have been murdered in Colombia, especially small farmers and rural leaders seeking to reclaim land belonging to their families and communities, as well as human rights activists supporting their struggle.

Sriskandarajah said “We need to find new ways to defend activists and hold governments to account for these violations as well as the progress they must make in the fight against poverty, inequality and climate change.”

These and other central ideas form part of the Apr. 25-28 international week in Bogotá, whose hashtag is #ICSW2016. The week will culminate in the CIVICUS World Assembly on Friday Apr. 29.

The organisers were expecting 500 delegates at ICSW2016, but 900, from nearly 100 different countries, showed up. They were received by the host organisation, the Colombian Confederation of NGOs, created in 1989 as an umbrella group for non-governmental organisations fighting for economic, social and cultural rights.

Participants have been inspired by the presence of 2015 Nobel Peace Prize-winner Ali Zeddini of the Tunisian Human Rights League, one of the four organisations that joined forces to guide Tunisia’s spontaneous 2010-2011 Jasmine Revolution during the power vacuum left by dictator Zine El Abidine Ben Ali (1987-January 2011) after he fled the North African country.

The Tunisian movement was finally successful in bringing about a transition to democracy, with a new constitution that establishes, in articles that cannot even be rewritten by another constituent assembly, that Tunisia is a civil state based on the people’s will, not the will of God. It also guarantees freedom of belief, conscience and religious practice.

The ICSW2016 will review mechanisms that hold governments accountable for murders of activists and other human rights violations. The delegates will also assess the progress made in the fight against poverty, inequality and adaptation to climate change.

Other participants are José Ugaz of Peru, the chair of Transparency International, and South African activist Kumi Naidoo, former head of Greenpeace and current director of the Africa Civil Society Centre.

One of this week’s workshops will address recent trends in the use of technology to empower and mobilise citizens.

One example is DataShift, a social data platform and Civicus initiative “that builds the capacity and confidence of civil society organisations to produce and use citizen‑generated data.”

A Youth Assembly was held Sunday Apr. 24 ahead of the ICSW2016. The delegates discussed solutions to youth poverty and inequality, as well as adaptation to climate change.

IPS spoke to Jhoanna Cifuentes, a Colombian with a degree in biology who is an activist with Red+Vos, a young people’s network. She is taking part in the ICSW2016 in representation of the Colombian Youth Climate Movement (MCJC).

The MCJC was created in 2014 to participate in the annual climate conferences. That year’s edition was held in Peru.

“We realised there was no space for young Colombians to come together and make their voices heard,” Cifuentes said. “We didn’t know each other, we all worked with different focuses. Our 10 groups organised and joined forces.”

The experience showed her that these civil society meetings are a chance to meet and network with people involved in similar activism. Because, she said, “Our work can’t just be limited to the local level, we have to have a wider influence.”

The Youth Assembly put out a statement on priority issues for young people, such as inclusion, gender and the environment. “But in order for these questions not to remain just on paper, it is the duty of each one of us to develop these initiatives and concerns in the organisations we work with,” Cifuentes said.

“I think a meeting like this one serves that purpose: to share information and make contacts in order to form networks, to work together in the future,” she added.