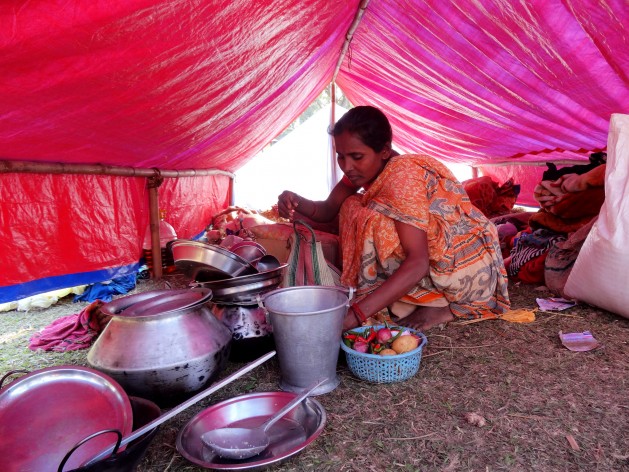 UNITED NATIONS, May 8 2016 (IPS) - The Food and Agriculture Organisation (FAO) believes that ongoing military conflicts, which have also devastated agricultural crops and livestock, are one of the primary causes of food shortages in war zones in Africa and the Middle East.

FAO Director-General Jose Graziano da Silva pointedly says “there can be no peace without food security and no food security without peace.”

To pursue its objectives, the FAO is reaching out to four Nobel Peace Laureates—Professor Mohamad Yunus of Bangladesh (who won the Peace Prize in 2006), Oscar Arias of Costa Rica (1987), Tawakkol Karman of Yemen (2011) and Kofi Annan of Ghana (2001)— to advance the cause of world food security.

The Rome-based UN agency will formally launch the FAO-Nobel Peace Laureates Task Force for Peace and Food Security on May 11.

Yunus, founder of the Grameen Bank introduced the concept of micro loans to the impoverished without requiring collateral; Oscar Arias was leader of the only country to abolish its armed forces; Karman, a human rights activist was recognized for her work in the non-violent struggle for women’s rights and Annan, a former UN Secretary-General, who along with a revitalized United Nations, gave primacy to human rights in the world body’s political agenda.

The FAO points out that “conflicts disrupt food production through physical destruction and plundering of crops and livestock, harvests and food reserves; they prevent and discourage farming; they disrupt food transportation systems; they destroy farm assets and capital; they conscript or entice young men to fight, forcing them away from farm work; and they suppress income-generating activities and occupations.“

Danielle Nierenberg, President of Food Tank: the food think tank, told IPS: “I think that global leaders are beginning to understand that food security and national and international security are linked.”

When people, especially young men, are unemployed, hungry, and angry—“or hangry” — they often migrate to cities where they can’t find jobs, she pointed out.

They can turn to violence or even terrorism. But initiatives like the Zero Hunger Programme, she noted, can help provide opportunities for youth and farmers and curb migration by increasing incomes and helping create opportunities in rural areas.

“Policy makers need to understand that without food security, they can’t have national security. These Nobel Laureates have an opportunity to create policies that can address all aspects of security—economic, environmental, and social,” said Nierenberg

And poverty rates are 20 percent higher in countries affected by repeated cycles of violence, and it is estimated that every year of civil conflict causes a 2.2 percent reduction in gross domestic product (GDP).

Violent conflicts, particularly a few very intense and intractable ones, are also a key driver of forced displacement, contributing to a record 59.5 million people around the world displaced by the end of 2014 – the highest number since the end of the Second World War, according to the World Bank.

Speaking of peace building and security, Graziano da Silva said last January that in the history of humanity, time and time again, there have been vicious circles linking violence and hunger. And these are conflicts that are not restricted by national borders.

“This is even truer in today’s globalized world. Hunger is not a problem of one country alone. It is a global issue that requires global action and responses.”

In post-conflict situations, persistent high food insecurity is a factor that can contribute to a fall back into conflict, he added.

Under a FAO-supported programme, about 500 former combatants in the Democratic Republic of Congo (DRC) have abandoned their weapons to become fishermen.

The agency is also reintegrating ex-fighters in Mali and in the Mindanao regions of the Philippines while a 2013 Somali Compact is aimed at ensuring sustainable peace in a country ravaged by an insurgency.

In 2014, FAO collaborated with the UN-African Union Mission in Darfur (UNAMID) to secure livelihood opportunities and promote peaceful coexistence in Sudan.

In Colombia, where a 50-year old conflict is winding down, the FAO has already signed an agreement with the Post-Conflict Ministry to improve technical capacities linked to rural development, land tenure, food security and access to markets.

In Nigeria, described as the “food basket for the Sahel”, FAO is supporting an initiative to train some 750,000 young commercial farmers in a region where ongoing conflicts have left millions of vulnerable people facing hunger and malnutrition.

“Investing in food security in the Sahel is also an investment in a peaceful and more stable future,” says the FAO chief.

According to FAO, there is unassailable historical data and evidence detailing how violent conflicts have devastating and lasting impacts on food security in a world where almost 795 million worldwide live in hunger.

“Conflicts affect the ability to produce, trade and access food, including by inhibiting farming, damaging infrastructure and destroying markets. At times, access to food is used as a deliberate tactic of war.

Loss of life, injuries, the life-long impact of malnutrition, displacement, theft or destruction of farming and productive assets, and damage to infrastructure have impacts well beyond the duration of violence itself.

Conversely, food insecurity, particularly when related to sudden increases in food prices, can contribute to political instability, as the food price crisis in 2007-2008 and the Arab Spring demonstrated

More recently, the FAO also points out that wheat has been used as a strategic tool by the Islamic State of Iraq and Syria (ISIS) where the group has seized control of silos and grain stockpiles and currently controls as much as 40 percent of Iraq’s wheat production.