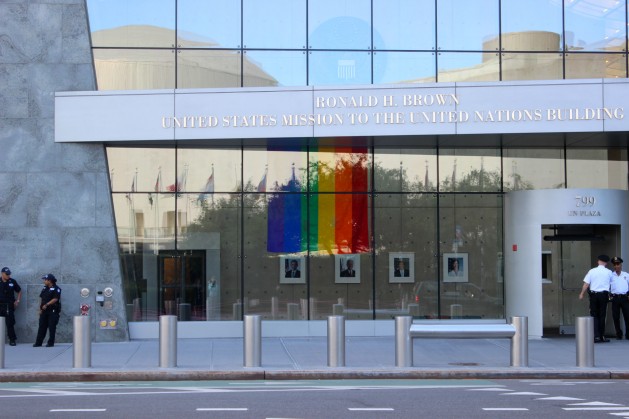 A Rainbow flag is displayed in the window of the United States Mission to the United Nations during LGBT Pride Month. Credit: Phillip Kaeding / IPS.

UNITED NATIONS, Jun 13 2016 (IPS) - Though the High Level Meeting on Ending AIDS ended with the adoption of bold and life saving targets, many organisations have expressed their disappointment in its outcomes.

During the meeting, the international community adopted a new Political Declaration that lays down the groundwork to accelerate HIV prevention and treatment and end AIDS by 2030.

Though many organisations that IPS spoke to were encouraged by the commitments, they also expressed concern and disappointment in the Declaration’s shortfalls.

“I think what the high level meeting showed us was the gap between reality and politics at the UN,” said International Women’s Health Coalition’s (IWHC) Director of Advocacy & Policy, Shannon Kowalski.

“The Political Declaration didn’t go far enough to address the epidemic that we face today,” she continued.

“If we are serious about ending AIDS, we need to go far beyond what is in the Political Declaration." -- Shannon Kowalski

Many were particularly concerned with stripped and exclusionary language on so-called key populations in the document.

“When we saw in the Declaration that key populations were less mentioned than 5 years ago…it is a real setback,” Alix Zuinghedau from Coalition Plus, a French international union for HIV/AIDS organisations, told IPS.

Among these key populations is the lesbian, gay, bisexual and transgender (LGBT) community. Though the LGBT population continues to be disproportionately affected by HIV/AIDS, they are only mentioned once in the Declaration.

Executive Director of Stop TB Partnership Lucica Ditiu told IPS that the document mentions vulnerable populations in relation to tuberculosis (TB), but that it should have been extended throughout the Declaration.

“We have a saying in my country: With one eye I laugh, with one eye I cry. Because that piece was missing,” she said.

The Declaration includes a target to reduce TB-related deaths among people living with HIV by 75 percent by 2020.

Amirah Sequeira, Associate Director of Health Global Access Project’s (GAP) International Campaigns and Communications, also noted the lack of language and commitment to decriminalize key populations including men who have sex with men, people who inject drugs and sex workers.

“The exclusion of commitments to decriminalize these populations will hold back the ability for the world to reach the bold new targets that the Declaration committed to,” she told IPS.

When asked about these concerns, the Deputy Executive Director of the Joint UN Programme on HIV/AIDS (UNAIDS), one of the main organisers of the meeting, Luiz Lorres told IPS that this exclusion will impede efforts to achieve the 90-90-90 treatment target.

“I acknowledge that more needs to be done,” he said.

Organisations have also pointed to issues around financing.

Through the Declaration, governments have committed to increasing funds for HIV response to $26 billion per year by 2020, as estimated by UNAIDS. However, Sequeira noted that not only is there a $6 billion funding gap, but also donors tend to flat line or reduce funding despite pledges.

“[Reaching the goal] will not be possible if donors continue to do what unfortunately they have been doing which is flat lining or pulling back funding from global AIDS programs,” she told IPS.

Though she applauded the U.S. President’s Emergency Plan for AIDS Relief’s (PEPFAR) newly launched $100 million Key Populations Investment Fund, Sequeira stated that PEPFAR needs a $500 million increase each year between now and 2020 in order for the U.S. to provide its fair share of needed financing.

Zuinghedau told IPS that without additional funding to scale up programs for key populations, the goal to reduce infections and end AIDS will not be possible.

“It is very frustrating to see countries say, yes we want to end AIDS but we’re not going to add any more funding. It’s a contradiction,” she told IPS.

The government of Canada recently announced a pledge of almost US$615 million to the Global Fund to Fight AIDS, Tuberculosis and Malaria for the next three years, a 20 percent increase from its previous pledge.

Kowalski applauded the move, stating: “If Canada can do it, we know that other governments can do it as well.”

Though the Declaration highlights the need to increase domestic resources for countries’ own HIV response, Ditiu stressed the need to ensure that governments continue to invest in vulnerable groups because they are often the first ones to “fall between the cracks.”

She added that it is important to include key populations in the implementation of commitments.

Sequeira also urged for the implementation of strong accountability mechanisms to ensure that commitments are translated into effective responses.

Though the Political Declaration is not “perfect,” Kowalski noted that it provides the bare minimum required to take HIV response to the next level.

“If we are serious about ending AIDS, we need to go far beyond what is in the Political Declaration,” she said.