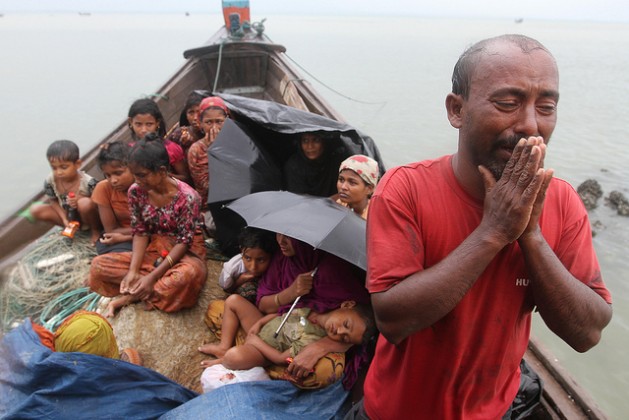 UNITED NATIONS, Jul 27 2016 (IPS) - Narrow national interests are threatening to derail an upcoming UN summit which aims to bring countries together to find a more humane and coordinated approach to large movements of refugees and migrants.

The existing system, which was established after World War II, is struggling to cope with record numbers of displaced persons, Peter Sutherland, the UN Special Representative of the Secretary General for International Migration said at an event at the International Peace Institute in New York last week.

Sutherland criticized the ethos prevailing over the debate concerning refugees. “It is not compassion but order, and keeping people out that has dominated the debate,” he said, adding that the negative dialogue “has bred xenophobia, racism and nationalism.”

Words like “erecting walls,” are cheap, said Sutherland, and the UN must stand strong and reverse the rhetoric.

Amnesty International, which has long supported radical change in the existing agreement to accommodate increasing migration, has warned that a few nations were working through the prism of “narrow national self-interest” and these few countries may scupper Secretary General Ban Ki-moon’s initiative to end the refugee crisis.

Amnesty also warned that a group of “unlikely bedfellows” including Australia, China, Egypt, India, Russia, Pakistan and the U.S., among others, risk bulldozing the only worldwide effort under way to provide concrete action to deal with the global refugee crisis affecting 20 million people.

The UN and organizations like Amnesty are appealing to these nations to change their positions to meet the challenge so that the new Global Compact on Refugees can be adopted at a UN Summit planned for Sept. 19.

“As time runs out to finalize what could and should be a game-changing agreement, so much hangs in the balance. Millions of refugees around the world are in desperate need – 86 percent live in low and middle-income countries often ill-equipped to host them, while many of the world’s wealthiest states host the fewest and do the least. This situation is inherently unfair,” Salil Shetty, Amnesty International’s Secretary General, is quoted saying in a press release July 25.

Instead of the new Global Compact on Refugee Responsibility Sharing, “What looms instead is possibly a shameful historic failure, with some states sacrificing refugees’ rights for selfish national interests,” Shetty added.

Secretary-General Ban Ki-moon has been calling for a new approach to large movements of refugees and migrants, and in May he set out some proposals in a report to the General Assembly, including for internationally agreed compacts on refugees and migrants. These include global responsibility sharing where no country takes on more than their fair share of refugees.

Amnesty warned that even the term “responsibility-sharing” is in jeopardy and the whole deal may be delayed because some states want absolute parity. The international rights organization blames a lack of political will and willingness to tolerate the preventable suffering of millions of people by continuing to build fences.

At the IPI meeting last week, Omar Hilale, Permanent Representative of the Kingdom of Morocco and upcoming Co-Chair of the Global Migration Group, said migration had built the history of humankind for thousands of years. “It should be a positive discussion, recognizing the importance of migration. … It is not an issue of conflict between North and South.”

Karen AbuZayd, Special Adviser on the Summit on Addressing Large Movements of Refugees and Migrants, said the work of setting up concrete mechanisms is “all in the hands of member-states.” The UN’s 2030 Development Agenda she said, frames migration in a positive manner, contrary to mainstream media’s portrayal.

“We must not lose sight of the bigger picture: the positive ones, the success stories,” that come out of migration. AbuZayd also pointed out that the majority of refugees are children and refugee children are five times less likely to attend school.

In order to respond to this crisis, countries like Lebanon, have gone into serious debt, while the six richest countries host less than 9 percent of the refugees, according to Oxfam calculations.

Questioned whether it is important for richer countries to provide finance through very low-interest loans to these countries, or invest in more humanitarian assistance, Mais Balkhi, the Advocacy Manager of Syria Relief and Development, told IPS that said it has to be all these steps and more.

“It’s important for the richest countries to share the responsibility including hosting more refugees themselves in addition to providing both finance assistance to hosting countries neighboring Syria and increasing humanitarian aid.”

The Deputy Secretary General, Jan Eliasson, speaking at a recent forum on migration and development, noted that of late, the public debate on migration and refugees has been dominated by security concerns.

Eliasson stressed the need to recognize that, overall, human mobility has a positive impact on development and is a driver for economic prosperity and social progress. Jan Eliasson also said that  “While there are trans-national frameworks to deal with the environment, trade and finance, we lack a similarly comprehensive approach to the governance of international migration — one linking migration, human rights and development.”

But Balkhi told IPS that the existing treaties, such as the human rights treaty, would be enough if they were being implemented, which is not the case in many UN member states.

“I think there should be a plan and a strategy to implement existing treaties and not creating new ones. States should be held accountable when human rights are not applied.”

On Jul. 25, the UN General Assembly voted for the International Organization for Migration (IOM) to join the UN as a related organization, a step which may indicate a move towards greater coordination of migration related issues within the UN system.