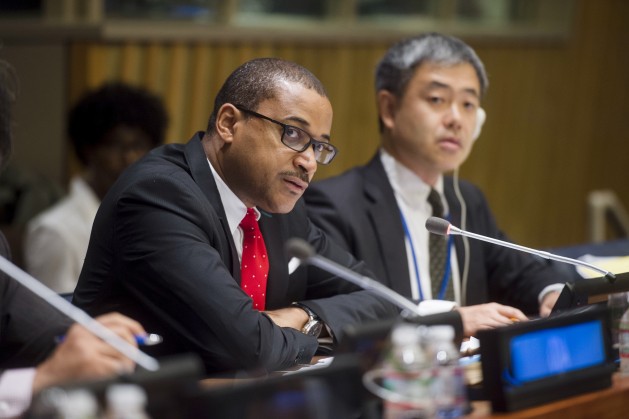 Jamaica was one of the early adopters of Human Rights Foreign Policy. Pictured: Courtenay Rattray, Permanent Representative of Jamaica to the UN. Credit: UN Photo/Amanda Voisard

NEW YORK, Jul 14 2016 (IPS) - While human rights are often viewed as a Western creation, pushed against the will of developing countries, the origins of the international human rights system may prove otherwise, according to a forum held at the the International Peace Institute (IPI) here Wednesday.

“There are many, many legacies of the Global South’s foundational and structural contributions to the evolution of international human rights,” Mogens Lykketoft, President of the UN General Assembly said at the forum.

“The first attempt to undermine The 1948 Declaration of Human Rights came from the United States, UK, and France, in what was the first organizational efficiency review of the United Nations”, said Lykketoft.

This review of the years 1950-1952, called the work on preventing discrimination, the state of the women, and freedom of information and the press inefficient, and even considered closing down the commission on human rights.

“This was strongly countered by countries such as Mexico, Chile, Egypt, Haiti, and the Phillipines, saying that we need to have agreements on social issues and human rights issues.” It is because of these countries’ efforts that these human rights bodies to continue to exist, said Lykketoft.

“Jamaica was the first country to integrate human rights into a foreign policy strategy in 1964, thirteen years before the Jimmy Carter administration of the late 1970’s did that." -- Steven L.B. Jensen

The story of how the global South led the contemporary international human rights system does not end there. The recently published book –The Making of International Human Rights: The 1960s, Decolonization, and the Reconstruction of Global Values – shows that their efforts in the 1960s post-colonial moment laid the foundation for the so-called human rights revolution in the 1970s, when Western activists and states began to embrace human rights.

“Much of human rights work operates with a flawed account of its own historical evolution,” said Søren Pind, Denmark’s Minister of Justice added.

Steven L.B. Jensen, author of the report and Senior Researcher at the Danish Institute, found that Ghana, Jamaica, Liberia and the Philippines took on leading roles.

“Jamaica was the first country to integrate human rights into a foreign policy strategy in 1964, thirteen years before the Jimmy Carter administration of the late 1970’s did that. There is plenty of writing on the Jimmy Carter and U.S. story, but Jamaica’s has never been written about,” said Jensen.

Jamaica’s 1964 foreign policy was focused around the same three elements which the President of the General Assembly has chosen to focus on in 2016: human rights, reforming international aid and trade, and peacekeeping.

Courtenay Rattray, Permanent Representative of Jamaica to the United Nations said he is proud of his country’s contributions to international human rights.

“As a young state in 1962, and a new member of the United Nations, Jamaica was concerned that the world lagged far behind in the field of human rights, and up to that point, the promotion of human rights had not been accorded the attention and the status it deserved within the united Nations system,” said Rattray.

“At the time of Jamaica’s independence, coming out of post slavery and colonial history, we faced the challenges of identity, inclusiveness and inequality.”

At the same time however, Rattray said it brought a perspective that gave particular importance to those concepts contained in the Declaration of Human Rights and the UN Charter.

“While these instruments are now considered non-derogable foundational documents, fifty to sixty years ago universal adherence and reverence now paid to human rights documents did not exist.”

“It was remarkable that a small, newly independent country like Jamaica had come on to the world stage determined to move the necessary resources in relation to the advancement of international human rights,” said Rattray.

Jensen’s report also found that The Declaration on Racial Discrimination and the Convention was proposed by nine francophone African states which created a breakthrough in international law that made it possible to finalize in 1956.

Also at this time, Liberia withheld the strong pressure from the Soviet Union and communist states to not only propose but push for the International Convention on the Elimination of all Forms of Religious Intolerance.

“This inspired the UK and the US to engage much more substantially in human rights work.” said Jensen.

The UK didn’t acknowledge human rights to be a legitimate issue of international concern until 1966. This push from Jamaica, Liberia, and the Philippines really pushed the Western countries into the human rights field, said Jensen.

“Looking back at this story and this battle to prevent discrimination in the UN agenda, what do we actually mean by ‘leaving no one behind’?, asked Jensen. “These are really important legacies to build on.”

Rattray contended, “As we face our contemporary challenges it falls to us to pick up the mantel of those who went before, to work through our differences, to forge agreements, and find effective solutions.”